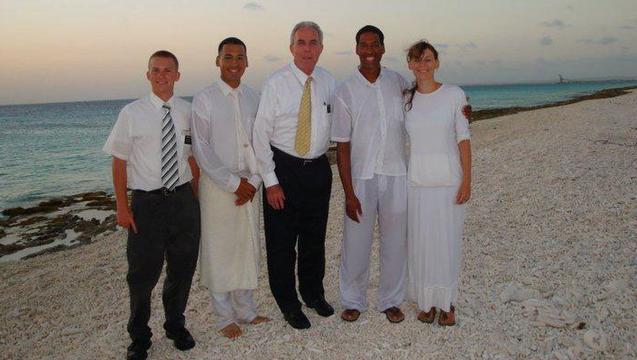 The word “pioneer” conjures up images of long-ago people in bonnets and buckskin, but there are many modern-day pioneers who are breaking new ground for The Church of Jesus Christ of Latter-day Saints. Just as the Mormon pioneers of the 1840s trekked across the American frontier to practice their religion and build a new life in the Salt Lake Valley, these 21st-century pioneers help build the Church in far-flung areas around the world.

Every year on July 24, the state of Utah celebrates the arrival of the Mormon pioneers in 1847, but this is also a time to remember the contemporary Latter-day Saints whose individual efforts spur the global growth of a church that now numbers over 14 million people.

On the small Caribbean island of Bonaire, two of those modern-day Mormon pioneers are Brian and Barbel Albus. Barbel is originally from the Netherlands and Brian from Aruba, but they moved to Bonaire in 2006. In March 2010, the young couple joined The Church of Jesus Christ of Latter-day Saints.

“Something happened when the missionaries came to our home. They brought such a light; they were happy and we wanted to be like them,” Barbel Albus said.

Less than three months after their baptism, Brian Albus was asked to serve as a lay leader in the Bonaire branch. Services in the small congregation are held in three languages: native Papiamento, Spanish and English. He said the Latter-day Saints in the area face many challenges in attending church, including a lack of public transportation and a struggling economy.

“In order to survive economically here, you need to work two and maybe three jobs, and that means most people work seven days a week,” Brian said. “We, as an organization, work hard to express our concern, to visit regularly and share our love so they will want to keep coming.”

But the Albuses say the sacrifices are worth it.

“Being the first members in both our immediate families is exciting but also challenging,” Brian Albus said. “It’s exciting because our perspective on life has changed. We have our priorities straight and now know what is important and what is not. Being a part of this makes us truly happy for having this opportunity to learn, act and share the gospel.”

In Africa, Kenya native Joseph W. Sitati first learned about the Church through a 1985 business conversation. The meeting agenda turned from engineering to religion, and Sitati discovered an entirely new approach to life in the message his colleague shared.

“I understood who I am as a child of God, a new concept for me. … I knew why I was here on earth, where I was going and why. I saw a new perspective on the family — that it was the central doctrine of the Church. That information helped me reorder my priorities. I had thought that success in the world would apply in my family, but it’s really the other way around.”

Since joining the Church, Elder Sitati has served in many lay leadership positions and now is serving in the Quorum of the Seventy, a senior leadership body of the Church where members are given the title of “Elder.”

In Paraguay, one pioneering woman’s commitment to Jesus Christ has now blessed subsequent generations of her family members. Eulogia Diaz de Sanchez was baptized in October 1960. At the time, her local priest tried to persuade her to renounce the Church, but Sanchez stood firm in her commitment. Sanchez’s mother and a daughter were baptized the following month, and her husband joined the Church in January 1961.

Today, there are more than 60 Sanchez descendants who are Latter-day Saints, in addition to more than two dozen other people who joined the Church because of the couple’s example of Christlike living.

Valiant stories like these happen every day, as the same faith and commitment that motivated the 19th-century Mormon pioneers inspires the growth of The Church of Jesus Christ of Latter-day Saints in the 21st century.