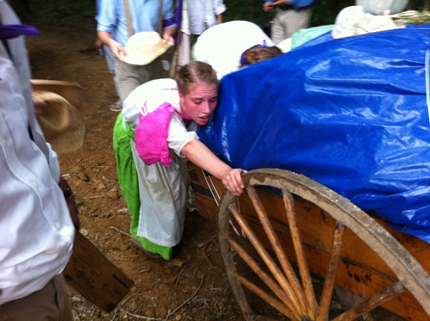 I have just returned from trekking through the Virginia woods with the youth of our stake, where we dressed up in pioneer garb, pulled handcarts until we ached, and stripped ourselves bare of some of the accoutrements of the modern world-no electronics, toothpaste, deodorant or make-up. We were swept clean of pretense in order to go deep into our souls.

We created fires in the wilderness, ate very few calories, and went without showers, but mostly what we did was remembered.  As Latter-day Saints, we are a people of memory, with a heritage that lives in our DNA, resonates in our cells, roots and plants us.

The night before we left for trek, we saw the Mormon Tabernacle Choir perform at the Wolf Trap, America’s National Park for the Performing Arts, and as they sang “Come, Come Ye Saints”, I could have shouted out, along with every Latter-day Saint there, “This is me. I breathe and bleed this history.  I pulse with this past that I never lived personally, but feel the power and sacrifice of.”

As the boys carried the girls over a stream in memory of the Sweetwater crossing of the Willie and Martin handcart companies, I thought how a stranger looking on would have believed we were about something nonsensical.  What is the meaning of all this?  We know, and knowing binds us to each other and to our past.  We remember.

It is tradition on these youth conference handcart treks to have a woman’s pull.  That is a period of time when all the boys are pulled off the handcart, as if they were called on missions, leaving the girls to heft it alone.  It is no ordinary, flat terrain where the girls are left to push and shove on their own.  In our Virginia trek, it was the very worst part of the trail, where it shot straight up a mountain, and instead of a smooth path, the road was knotted with tree trunks and rocks, holes and gashes from water run off.

I was the “Ma” to our family, so though I was not allowed to help, I could cheer them on. “Come on girls, you can do it.  We’ve got it in us.”  I called out words of encouragement to the girls in our family, while they gritted their teeth and began to pull the heavily loaded handcart up the hill. Some of those girls were frail, mere wisps. All were gasping for air. Up they pulled that cart, straining at the bar, perspiration dripping off their reddened faces, grit in their hearts. “We can do this,” I shouted from the sidelines, but the cart moved by inches, not feet.  A wooden wheel would fall into a hole, bordered by a rock and the girls in back would dig in until they were parallel to the ground and push, faces changing from pink to violent red.  It was difficult beyond imagining, for the handcart was poised like a planted thing on the side of the hill, unable to move.

I remembered what the early Saints had said about doing impossible things.  They said they would live the gospel “at all hazards”.  They painted their handcart coverings with slogans like “Zion or bust.” They threw away possessions along the trail, leaving a litter of lost memories behind them.

Our stake president, Doug Bush, was at the top of the hill at our trek, urging the girls on.  He seemed to stand as a goal.  Maybe we can go that far, and no farther, the girls thought, squinting their eyes against the sun and calculating the distance.

But there came a moment when every muscle was worn, every last reserve of energy was depleted.  The girls could feel their pulses in their heads.  They pursed their lips, they groaned, they pulled against the load, yet still it would not move.  One, two, three-push, they said, attempting to coordinate their efforts.  They might as well have been pushing against a mountain for the cart would go no farther, the wheels rutted against an uncompromising rock, the cart sagging under the load of supplies. 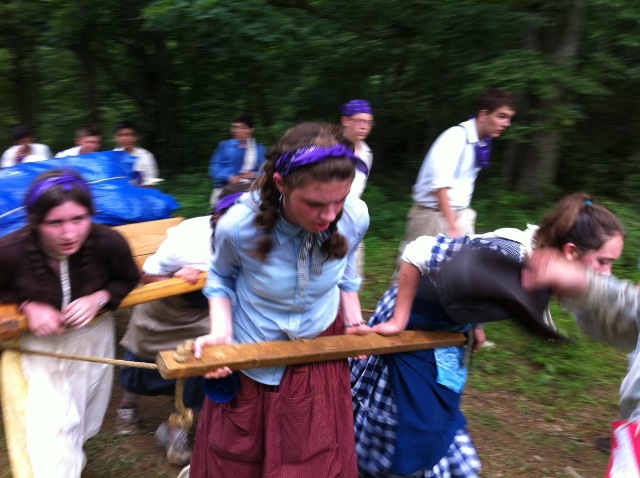 The boys felt helpless watching their trek sisters struggle so.  They would have loved to hop in and shove or put the bar against their own muscled chests and pull-but they couldn’t.  It was not allowed.  Tears filled some of their eyes.  Some of them found ways to fan the girls drenched in Virginia’s humid heat.

That’s it.  We’re done.  That’s what their hearts said.  Yet ahead stood our stake president.  “You can do it, girls.”

What do you do when you are up against the impossible and the hill ahead is still steep and your energy has flagged?  With a rock lodged against the handcart wheels so it wouldn’t run away down the hill, we did the only thing possible.  We bowed our heads and prayed.  We pled for strength.  We pled for help.  “We can’t take one more step without thee.  We can’t push one  more foot without thee. Oh help us, please.”

Our prayer finished, we shifted the girl’s positions on the cart.  I was allowed now to join in the push.  We felt renewed and we began pulling and pushing the cart again.  I had thought I understood the challenge of the handcart pioneers when I read their journal entries.  I had thought I trembled in compassion when I saw the girls shaking against the bar.  I didn’t really know how it felt until I was added as a helper to push that cart up the hill.  “We do this for Zion,” one of the girls said.  “We give everything for Zion.”

Oh, the searing difficulty of pushing that cart that wouldn’t budge against our efforts.  Up three inches, fall back four. Up a foot, stop for a rest, then up a foot more.  Each root across the trail was a small test of character, a dreaded anticipation.

Then there came a time when we got up to the top of the hill and President Bush had moved.  The top of the hill wasn’t the end, after all.  It was only a little level spot before another hill, just as long, with a path just as nubby.  How could there be another hill when  we had already given our all?  We could have all sat down in the path and wept, but instead we continued, “One, two, three push-for Zion.”

I would like to say that at the top of the second hill, we were finished.  I would like to say that I didn’t begin to feel pressure in my chest as my lungs burned. Oh how I had underestimated these pioneer forbears and what they had accomplished.  For us, the first hill gave way to a second, and the second led to a third.  It wasn’t until we had pushed and pulled up four hills that we were at the top.  Each time we all cried out together, “Not one more.”  So this is what they had done?  “For some must push and some must pull, as we go marching up the hill, so merrily on our way we go, until we reach the valley-o.”

At the top of the hill, red-faced girls, some still weepy, put down their handcarts and hobbled down the hill to help the next handcart group.

It was compassion shown under great duress.

As it turned out, the duress made its mark upon us all, because at the testimony meeting the next day, most of the testimonies were about the woman’s pull. The wilderness journey we call life was designed with a handcart too heavy and just one more hill.  You have had those times and so have I.

I cannot pull one more step, we explain very politely to the Lord. I have gone as far as I can go.  I intend to stop right here on this incline because my back is weary and my heart is pounding.  My hope is dashed because I thought that at the top of this slope I was done, and now you are telling me there is just one more hill-and then maybe another after that as well.  Everything inside you screams to give up.  You weep with exhaustion.

But something can happen during those times of greatest duress, something that was captured in words that a young man said in his testimony.  “Don’t tell God how big your storm is, tell the storm how big your God is.”

The Lord tells us in 1 Nephi, that when we are in the wilderness journey, “You will know that it is by me that ye are led.”  How can we know unless we are stripped of any false ideas that we can do it by ourselves?  How weak we are when we are left in our own strength.  The hand cart had come to a dead stop with the girls in their flowered pioneer dresses quivering against the bar until we prayed.  But after that we made it up three more hills.

We came to know for ourselves, demonstrated in a tangible way so that it would be forever imprinted in our minds, “I am the vine, ye are the branches:  He that abideth in me, and I in him, the same bringeth forth much fruit, for without me, ye can do nothing.”

The pioneers trafficked in impossibilities and our lives often ask the same of us, but we are not alone in this journey.  We never were. When the Lord asks of us just one more hill, he will give us the muscles to make it.

And do you know how the girls felt at the top of these mountains?  Triumphant.  When life asks us to climb just one more hill, with God’s help, we can do it.