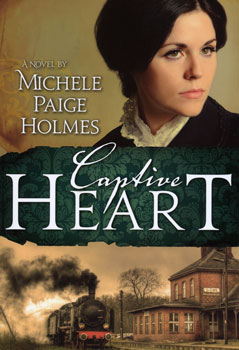 To begin with, I thought Michele Paige Holmes’s new book Captive Heart was a comedy. It begins with a train holdup with a dozen or so outlaws selecting young women to work in a frontier town whore house.  The protagonist, Emmalyne Madsen, sits ramrod stiff in her uptight brown wool suit, praying she won’t be picked.  Alas, she is picked by the last outlaw, a bumbling character whom she fights literally tooth and nail until he gives up and jumps from the now moving train.  She thinks she’s safe, but is given a shove from behind by the sweet little granny type woman who had been sitting next to her.  She lands, of course, atop the outlaw.

As I continued to read I found the novel to be a serious historical romance, riddled with funny scenes and many clichés that actually work.  Some of the humor borders on black humor, but overall the book is fun, entertaining, and thought provoking.  I have to admit that, though I’ve read Holmes’s previous award-winning contemporary romance novels, I found this one to be her most delightful story yet.

Emma and the inept train robber, Thayne, begin following the railroad tracks.  It seems the rest of the gang with their captives left Thayne behind.  They even took his horse and supplies. Emma concludes she has made a mess of her attempt to defy her father and avoid a boring marriage and life by accepting a teaching position in Colorado.  Thayne regrets, almost at once, resorting to such drastic measures to find a teacher for his son, but he has little reason to trust he could find a teacher any other way.  His disastrous marriage to a cheating, cruel woman taught him well not to trust a woman.

Emma never stops trying to get away which leads to numerous disasters and Thayne resorts to pulling his gun to persuade her to follow his instructions and keep moving away from civilization.  Circumstances of their trek place them in the position of saving each other’s life more than once. Little by little Emma learns she isn’t destined for the occupation the other captives are forced to endure.  Her captor is almost gentlemanly and it soon becomes clear she was abducted because he has urgent need of a schoolteacher.

When Emma learns they are headed toward a Black Hills Indian village and that  her captor has a son who is there, her fear escalates.  She assumes the boy is a captive and she is to be traded for his freedom, though she’s not sure why the Indians would want a school teacher.

Both Thayne and Emma find themselves drawn to the other and they both vigorously fight this attraction.

As background for the romance building between Thayne and Emma is the historical gold rush of the late 1800s that drew unprincipled men to the Dakotas and which led to brutal warfare between the native Indians and the usurpers who killed the buffalo and laid claim to their land. With hundreds of men without wives or daughters, fortunes at stake, and little to no legal law enforcement available, strength and cunning often took precedence over right. Matters requiring real law required traveling great distances. Trustworthy friends were few and far between, but greatly valued when found.

The characters are well defined, grow with the story, and are likable.  They have their share of flaws which serve to make them feel real, though perhaps just a tiny bit exaggerated. Much of the struggle between Thayne and Emma could have been resolved early on if they’d trusted each other enough to have an honest conversation.  Generally when the conflict between the two leading characters in a romance is based on misunderstanding, the story is weak and doesn’t hold up well, but Holmes did a good job of creating plausible reasons for their distrust and inability to communicate.

Captive Hearts touches on several major issues of that time period without delving into any of them at great length. It is light, easy to read,  and definitely more romance than historical.  The serious issues of racial understanding, broken treaties, matters of conscience, personal honor or integrity, women’s rights, child abuse, disabiities, and the need for communication are there, but are not delved into at any great depth.

Michele Holmes grew up in California and Arizona.  She graduated from BYU with a degree in elementary education.  She and her husband now live in Utah and are the parents of five children.  She received a Whitney Award for her first published novel, Counting Stars and was a finalist two years later for the sequel.