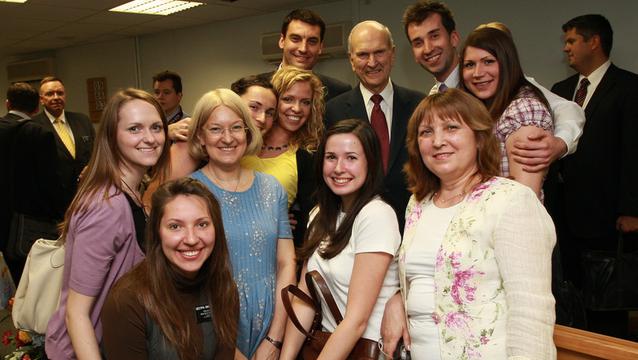 Elder Russell M. Nelson of the Quorum of the Twelve Apostles of The Church of Jesus Christ of Latter-day Saints organized the Moscow Russia Stake on 5 June 2011 — the first stake in Russia and the second in the former Soviet Union. The meeting was held in Amber Plaza auditorium in Moscow and attended by more than 1,100 people on a warm and sunny day in Moscow.

A stake is an administrative unit composed of numerous congregations (called wards and branches) within a geographic area (similar to what other faiths might call a diocese). The Church operates 2,926 stakes worldwide.

“I love the Russian Saints,” said Elder Nelson, who first visited Russia in 1966 with the American Heart Association to teach Russian surgeons.

“Be united as one in faith as a stake,” Elder Nelson told those in attendance. “Pray for your new leaders. They will need your prayers. Be valiant in every possible way to live the gospel, especially in teaching your children as you read the scriptures together.”

The Church’s history in Russia goes back nearly 170 years. In 1843, Church founder Joseph Smith called two men — Elder Orson Hyde of the Quorum of the Twelve Apostles and George J. Adams — as the first two missionaries to Russia. In 1903, Elder Francis M. Lyman, an apostle, offered two prayers of dedication in Russia, one in St. Petersburg and one in Moscow. However, political events surrounding the Bolshevik Revolution prevented the establishment of the Church on Russian soil.

In January 1990, Latter-day Saint missionaries arrived in Leningrad, and in May 1991 The Church of Jesus Christ of Latter-day Saints was formally recognized in Russia. The Ministry of Justice of the Russian Federation in Moscow recognized the Church as a centralized religious organization.

The Church currently has more than 21,000 members in Russia spread throughout 116 congregations.