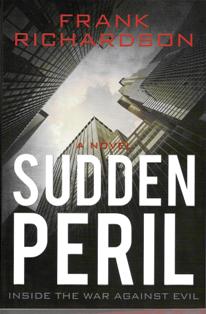 Sudden Peril by Frank Richardson is a book that left me with mixed feelings.  It’s fascinating, the timing is great, the characters are likable and there are glimpses of growth in some of those characters, and there’s no question that the exciting plot will hold the reader’s attention and will certainly cause a few sleepless nights as readers have to read “one more page” until the wee hours of the morning.  My problem with the story deals with the questionably ethical behavior of the group that purports to be mostly LDS members in good standing with the Church which is at the center of this story.

Jamie Madero one of several protagonists in the story signs on with the Freemen Institute as a summer intern.  Arrangements are made to meet someone from the Institute in an out-of-the way spot and accompany him to the training center.  Once contact is made, a journey that consists of mostly walking and some hitchhiking begins, a trip that carries Jamie from Flagstaff to Denver with little explanation for their mode of travel and the discovery that someone is trying to kill his companion and possibly him.  After several close calls, Jamie and Chad arrive at a secluded mountain retreat where they exercise and learn espionage techniques.

Sarah Rudman is on the run. Caught photographing financial documents of the large corporation in Canada where she is employed, she barely escapes with her life.  When a hired hit man for Fletchner International finds her in Seattle, she is again forced to flee until she makes her way to the Freeman Institute training retreat in the mountains near Denver.

Chad Rowley along with Jeff Gordon are leaders of the Freemen Institute.  Chad is also hiding from the Fletchner thugs.  He’s in love with Sarah even though she’s on a quest to become as great as her father at espionage.  Though her father appears late in the novel and clearly has connections to the CIA, his background is a little vague.

On the Fletchner side are the chairman who plays his people against each other and has no conscience, Julianne who is head of security though the thug, Art, has an inside track with the chairman and carries out searches, interrogations, and executions without consulting her, a CIA plant, and the hired assassins who answer to Art.

There are enough twists and turns, chases, and surprises to make most action readers happy. Switching leads as often as this novel does in a novel of this length is often annoying and confusing, but Richardson handles this well and it isn’t an irritant.

My greatest criticism of Sudden Peril involves the Freemen Institute Richardson invents as the group the protagonists belong to.  Most of the members of this group are LDS and though there is a disclaimer stating that the group has no connection with the Church, there are strong suggestions that it has the Church’s sanction.  Actually the Church cautions members against joining secret groups.  The group uses illegal methods to gain evidence against evil corporations that front for crime.  Breaking the law to catch law breakers violates the Church’s stand on honesty.

Without legal authority for their espionage, the undercover members of the group are guilty of stealing from their employers even if the employers are crooks.  The group is also irresponsible both in sending individuals into dangerous situations and in staging their training seminar without providing backup security. The political overtones of this group smacks of vigilantism and political extremism, even though they don’t resort to meting out punishment until their actions push them into a corner where they must kill or be killed.  Even then, the conclusion smells of deus ex machina.

In spite of my reservations about the Freemen Institute, I enjoyed reading this book and recommend it to action readers.  There are loose ends that hint that a sequel or a series is being planned.

Frank Richardson holds degrees from the University of Utah and the University of Washington. His career path has taken him from a military chaplain to an administrator for LDS Welfare Services. He presently teaches at Weber State University.  He and  his wife live in Utah.

SUDDEN PERIL, INSIDE THE WAR AGAINST EVIL, by Frank Richardson, published by Bonneville Books, an imprint of Cedar Fort, softcover, 244 pages, $15.99