Mormons in Africa: A Bright Land of Hope | Meridian Magazine

Mormons in Africa: A Bright Land of Hope 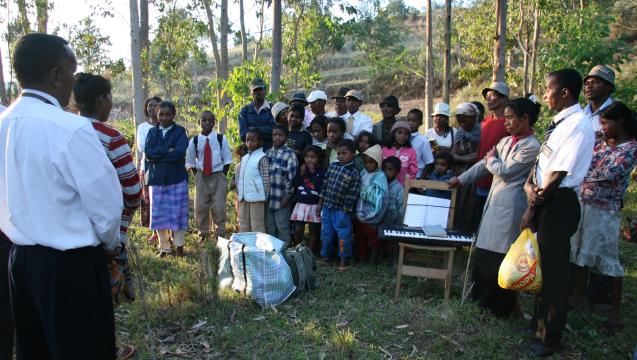 “Africa has been held in reserve by the Lord,” Elder Jeffrey R. Holland of the Quorum of the Twelve Apostles said in an October 2010 visit to Burundi. “Africa will someday be seen as a bright land full of gospel hope and happiness.”

Africa is one of the fastest growing areas of The Church of Jesus Christ of Latter-day Saints with some 320,000 members, the majority of whom have joined the Church over the past 30 years. They have found that hope and happiness spoken of by Elder Holland by embracing the teachings of Jesus Christ.

To accommodate such rapid growth, many are needed in lay leadership roles to maintain more than 900 congregations across the continent. As a native of Nairobi, Kenya, Elder Joseph W. Sitati served in many lay leadership positions and now is serving in the Quorum of the Seventy, a senior leadership body of the Church where members are given the title of “Elder.”

His first knowledge of the Church came through a 1985 business conversation. The meeting agenda turned from engineering to religion, and Elder Sitati discovered an entirely new approach to life in the message his colleague shared.

I understood who I am as a child of God, a new concept for me. … I knew why I was here on earth, where I was going and why. I saw a new perspective on the family — that it was the central doctrine of the Church. That information helped me reorder my priorities. I had thought that success in the world would apply in my family, but it’s really the other way around.

“The Church makes our members better fathers, mothers, sons and daughters with the knowledge of who they are and their potential — the great potential to do good.”

Early converts such as Elders Sitati and Olukanni possess a unique perspective on the growth of the Church in Africa. They’ve observed small congregations in a handful of countries increase until today the Church has a presence in 32 countries.

“Now is a time of great transition across Africa,” Elder Sitati said. “Cultural traditions are breaking down; people are migrating to the cities. In a new and unfamiliar environment with very little to hold on to, they become more responsive to the gospel of Jesus Christ. They are, overall, a religious people, very receptive to the Spirit, and they find a sure hope in the teachings of the Church. They join the gospel culture.”

Elder Sitati described positive changes in the lives of a pair of fellow Africans who also became members of the Church:

Isaac worked as a gardener but was unable to support his wife, who, of economic necessity, lived 2 ½ hours from Nairobi. After his baptism and following Church teachings, Isaac broadened his understanding of his personal potential. He worked hard, volunteered for additional training and found a new job. The new Church member eventually upgraded from an embassy driver’s job to his own business.

Shem lost his job shortly after he joined the Church in 1989. His wife’s experiences in Relief Society, the women’s organization of the Church, helped them start a food business. “They now have a thriving catering business based on the skills they learned in Relief Society,” Elder Sitati explained.

The Church’s presence in Africa began with missionaries in South Africa in the early 1850s. It was not until the late 1970s that membership noticeably increased across the continent of Africa.

Nigeria, for example, had an entire congregation join the Church in 1978, many of whom had learned about the Church years before and were patiently waiting for an approved organization. In less than 10 years, there were nearly 10,000 members and the first stake (a geographic division) was organized. By 1999, membership increased to nearly 43,000 and stands at approximately 100,000 today.

The Democratic Republic of Congo is one of the fastest growing regions in the world. Thousands of new members have joined the Church with more than 4,000 becoming members in 2010 alone. Mozambique had 40 members in 1999 and has increased to more than 5,000 today.  Nigeria, Ghana, South Africa, Zimbabwe, and the Ivory Coast also have sizeable congregations.  There are a total of 102 stakes and districts, 18 missions and nearly 320,000 members across the continent. The Church presently owns or leases 725 meetinghouses in 34 African countries.

While these numbers are significant, they don’t tell the complete story of the Church’s impact in Africa through such efforts as humanitarian aid, education, spiritual edification and teaching self-reliance to improve the quality of life.

A pipeline installed under the supervision of the Church’s humanitarian aid outreach transports clean snowmelt from Mount Kenya to villages miles away. “Water is a precious commodity here and many people don’t have access to clean water,” Elder Sitati said. One woman covered five miles each day for 40 years to collect water. The new pipeline to her village now dramatically reduces her journey. The first time she got water from the pipeline was the first time she had ever tasted clean water.

This clean water initiative is only one of several African humanitarian efforts implemented individually or in partnership with other relief organizations. The Church is also helping to eradicate measles. According to the Red Cross, millions of African children have been immunized against measles, leading to a 92 percent decrease in measles-related deaths across the continent between 2000 and 2008. More than 50 thousand medical personnel have been taught and equipped to perform neonatal resuscitation, which translates into thousands of infant lives saved. Wheelchairs have also been provided for tens of thousands of African residents.

Another outreach, the Perpetual Education Fund, is a Church loan system that facilitates university and technical education. The program is funded through contributions of Church members and others throughout the world that support its mission to help families become more self-sufficient. It is a revolving resource in which money is loaned to an individual to help pay for training or advanced education. With better skills, the student then pays back the loan to the fund at a low interest rate. Since 2001, around 3,000 people have benefited from the program in Africa.

Educational opportunities come to African communities in a variety of ways.

A cooperative food initiative in the Democratic Republic of the Congo, for example, trained local farmers to produce a successful crop of cassava, an important nutritional element in the diet of the residents. Local Church leaders supervised the project that began in 2006.

“The people had to learn new agricultural practices: better preparation of their fields, appropriate irrigation and even plant spacing,” explained Wade Sperry, field operations manager for the LDS Charities Food Initiative. In the first year, the newly developed plants and the new farming techniques produced 900 tons of the much-needed food supply, a 50 percent increase over other methods.

“This project offers local self-reliance at its best,” said Ferron Squires, director of the program. “These subsistence farmers have increased their production, improved processing and marketing. They have given back to those in need with their surplus. It’s a great success story.”

Success and change comes in small steps for Church members in Africa, but the steps continue despite enormous challenges in physical, political and cultural environments.

“The African people are a kind and patient people,” said Elder Richard G. Scott of the Quorum of the Twelve after a recent visit with members of the Church in Mozambique and Nigeria. “They don’t have a lot of income or resources that allow them financially to do things, so they just do them out of sheer effort. They will walk miles and miles and miles to accomplish something that they are prompted to do by the Holy Ghost to further the work.”

It is that will coupled with hope, Elder Sitati maintains, that makes transformation possible. “The teachings of the Church give them hope. People can climb from adverse circumstances; they embrace those teachings and their lives are blessed. The Church arrived in Africa at the right time. It’s not a quick fix to all the problems faced by people in these lands, but it is a sure fix.”

See the story at the LDS Newsroom.