The Power of Music in a Missionary Experience

Mark Albright is the president of the Washington DC South mission and shares these missionary stories with Meridian Magazine.  This letter was written by Nichole Reid, one of the missionaries who were instrumental in the conversion of Henry. 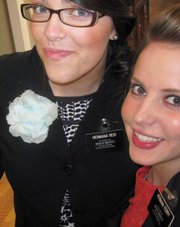 We have been teaching Henry for about four weeks and he has been reading The Book of Mormon diligently, but still has many doubts.   Even so, the progress he has made thus far has been substantial.

He went from not even wanting to touch or read from The Book of Mormon to now owning his own copy and asking questions without end about his homework passages. We challenged him to go to the temple visitors’ center and again to pray to know if Joseph Smith was a prophet and if The Book of Mormon is the word of God, while watching “Prophet of the Restoration.”

I cannot begin to tell you how many prayers we have offered in his behalf pleading to our Heavenly Father to grant our promise that we made to him: that he would know for himself of the truth of the Restoration and that all his doubts would cease.

Last night, we decided to do something special to motivate him and solidify his testimony of the Restoration.  We tried to ask him after his experience at the visitors’ center how his experience was and if he had received and answer, but he acted very distant.  So we knew we had to really prepare a great lesson and give him everything we had.

We prayed about what we should do to make this lesson special for Henry and chose hymns for Hermana Ferry to play on her cello and me to sing that coincided with the first lesson.  The first song I sang was, “Our Savior’s Love.”  We continued on with the songs we chose for each gospel principle and then we briefly discussed each one, carefully emphasizing the Apostasy and the need for a Restoration.

The room was as silent and peaceful as the Celestial Room as my companion shared her testimony of the Prophet Joseph.  Truth was born that night and the Spirit testified of it. We finished up the lesson by singing “I know that my Redeemer Lives,” and each of us bore testimony of The Book of Mormon, as well as our member exchange.

Two other nonmember friends of Henry were present in his home with us.  One of the men started to bring up some controversial questions, and I could feel the Spirit withdrawing from the room.  I was ready to respond but the Spirit stopped me and prompted me to let Henry respond.  Henry turned to his friends and eloquently defended the Church, Joseph Smith, and The Book of Mormon.  He testified to them that Joseph was a man who had been chosen by God as His Servant and that The Book of Mormon was an instrument that God placed on the earth to teach and guide us.

We couldn’t believe what we were hearing!  I was so happy to hear his testimony and listen to what he had learned from the Spirit!  Henry’s testimony, which was just a seed before, was now nourished by defending and bearing it.  Every investigator should have the opportunity to share what he knows to be true, after his own personal study and confirmation, and know what it feels like to have the Holy Spirit confirm those words, as it did for Henry’s words last night.

After that spirit-filled lesson, Henry pulled us aside and whispered, “Hermanas, What is this that I am feeling?” He placed his hand over his heart and looked down trying to hold back his emotion while tears fell down his cheeks and said, “I feel it right here.”

After a short pause he said, “I am not a man who portrays much emotion, but I cannot describe what I feel.  I am speechless.  I felt this exact way at the temple visitors’ center last week when I watched the Joseph Smith movie.  As we left the visitors’ center, these same feelings overwhelmed me and I could not speak, I was so overwhelmed and to this day I cannot describe it.”

Henry was baptized shortly afterwards on February 14th, and is a wonderful new member of the Church.

(Henry has since advanced to the office of Elder in the Melchizedek Priesthood, received his Patriarchal Blessing, is a teacher of Principles of the Gospel, and will be entering the temple to receive his own endowment this March.)