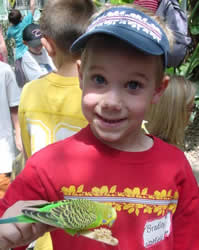 If you were to look at Bradley Bertola from American Fork, Utah, what you would see is an eight-year-old kid.  Bradley’s appearance belies his status as an amateur chef who has already won renown for his cooking skills, and who is battling for a $25,000 prize in a cutthroat Pillsbury competition.

Bradley, who is the son of Greg and Nani Bertola, enjoys cooking with the family.  The family has a tradition of cooking something together on Sunday and then taking it to the neighbors to give away.  But Bradley’s creativeness has already won him a trip to New York, where he was one of five finalists in the All (detergent) Small Chefs Big Mess Challenge.

Although Bradley’s recipe for chicken roll-ups didn’t win first prize, he was on The Tony Danza Show and he took home a check for $5,000.  The contest was judged by celebrity chef Rachael Ray, the host of Rachael Ray’s 30-Minute Meals on the Food Network, so Bradley was able to rub shoulders with greatness. The experience taught him that cooking is fun, and taking home a prize is even better.

No sooner had Bradley returned home than Nani’s sister gave Nani a flyer for the Pillsbury contest – Kids Bake it Fun.  Nani and the boys went to the store and bought everything they could think of that might help them bake and decorate a cake for the contest.  Bradley called his favorite the “Popcorn Popping Cake.”  Brett’s favorite cake was a “Cake on Fire.”

Two weeks ago, the Bertolas got the news – “Popcorn Popping” had received a thousand-dollar prize as one of the ten finalists.  Voting is now underway at the Pillsbury website.  Visitors to the site can cast one vote per day for their favorite cake, and Nani hopes everyone will vote.

Bradley’s cooking prowess may be genetic.  His 17-year-old sister, Brittni, won the grand prize in the junior division of the Pillsbury Bake-Off when she was ten.  In fact, Bradley adapted her recipe for Yummy Chicken Roll-Ups when he entered the “All” Small Chef Big Mess Challenge.  And Nani, who was once among the top five winners in an Emeril Lagasse pie contest, recently saw her candy cane cookies featured on a Food Network television show.

Although Bradley could probably take his cooking skills to the top, he prefers SpongeBob SquarePants to the Iron Chef.  “After all,” Nani says, “he’s only eight.”  When he isn’t cooking he enjoys playing in the mud.  He currently plans to be a doctor, but is considering making cakes to take to his patients.

If he wins the Pillsbury contest, Bradley has big plans for his cash prize of $25,000.  “I want to pay for my mission and Brett’s mission too,” he said.