The Folly of Looking Around to See Who You Are 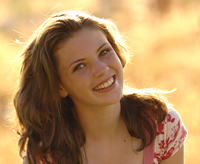 Our fourteen-year-old, Michaela, attends a Virginia school with 4600 students from 7th through 12th grade, one of the largest in the nation. In her grade there are two active Latter-day Saints, two who are alone in an undulating wave of teenagers who have hardly heard of Mormons and think that anybody who doesn’t cuss, tell jokes with sexual innuendos or worse is the other side of strange.

She mentioned the other day that a boy at school likes her and wants to ask her “to go out”, which is apparently the new term for what we used to call “going steady” or “going together.” It is an interesting term because apparently they don’t go out at all, but hang out, hanging on each other, inseparably at school.

Michaela explained to him, with little interest and great relief I think, that she was a Latter-day Saint and couldn’t date in any form until she was 16. A few days later, however, the word got back to her that the young man was being mocked at school because “he liked a Mormon.” The idea was how could anybody like someone so entirely odd and squeaky clean?

Michaela admitted she was taken aback at first, and her best friend, in a show of affectionate loyalty, was furious that Michaela was being ridiculed for her religion. Finally, however, she found out that it was really only three boys who were jibing her wannabe steady, and since it was only three, she figured, why get upset?

In fact, she was so unconcerned that she came home, as usual, saying what a great day she had and then chatted animatedly with me all the way to her singing lessons. It was only later that she mentioned the incident, almost as an aside.

Only three boys were making fun of her for her religion, so it wasn’t worth falling apart? I thought of myself at 14 (and for decades later) and knew that if one person even hinted that I was odd for my religious beliefs, how devastating that would have been. For me, three would have been a pointing, jeering mob and I probably would have burst into the safety of my home after school and cried.

Fourteen is a tentative time when you are feeling your way to your identity, unsure and uncertain, hoping desperately not to look out of step in any way less you be discovered to be weird and unpopular, exposed as the gawky nerd you are sure you are. Fourteen means that you have to wear the same jeans as everybody else, bought from the same shelf at the same store.

(Probably part of all of us is still fourteen in some way.)

Where did this strength come from to abandon defensiveness in the face of outright attack and continue to stand tall for who she is as a Latter-day Saint?

It reminded me of something that happened earlier when our daughter, Mariah, was a sophomore swimming in the same kind of sea at our large school. Though she had put on her application form for the play that she couldn’t perform on Sunday, the director hadn’t noticed and assigned her a good part in Beauty and the Beast . Some weeks later, when he truly realized that she wouldn’t be performing on Sunday, he stripped her of her part and she became a dancing napkin in the chorus.

In fact, the napkins wore sleeveless costumes, and without mentioning it to us, she found material and sewed in sleeves. We affectionately said to her that she played “the Mormon napkin” in the play.

To Mariah, theatre is everything. Her answering machine sports her doing an Australian accent. Her Dad’s has her doing a British accent. The walls of her bedroom are splashed with Broadway posters and a dramatic mask hangs over her bed.

I was worried that being demoted to the far dark corner in plays so she could easily be removed for the Sunday performances would be just too much for Mariah to bear, and when she arose teary to bear her testimony during a sacrament meeting that was happening just as her play at school was beginning, I thought, “How sad she must feel.” I turned to my husband, Scot, and asked, “Do you think this is just too hard for her?”

Instead, through her tears she said that her play was starting in a few minutes without her, and she was grateful for the Sunday performance, because it gave her a chance to tell all of her friends why she wouldn’t be there and why it mattered to her.

By the way, she never gave in on the Sunday issue—her director did.

Later, she sponsored “Hug a Mormon day” at school—and since she was one of the very few, she got lots of hugs.

It’s not just teenagers who are finding they have to stand up for their beliefs in this challenging world.

Jonathan Hyatt, an eight-year-old second grader in our ward, came to the pulpit last fast Sunday. He is still so small, he had to stand on the little stairs next to the pulpit and pull the microphone down to be heard. Then in a little voice he said, “Some friends at school were talking about things they shouldn’t. They asked me to come over and talk with them. I came over and said, ‘Can’t we talk about something else?’. In the name of Jesus Christ, Amen.

These acts of fearlessness on the part of our youth are indeed, the bearing of testimony. Can another word be necessary when you have stood for what you believe?

We’ve seen firsthand at our house how today’s youth are pummelled, not only to make devastating choices like drugs or immorality, but to stand up and forge an identity that is different from their peers. Nothing feels so isolated as standing up alone before your school friends and saying, “This I believe in. This is true. This I am.”

Courage is not just an attribute of the battlefield. Perhaps the most personal kind of courage comes in the blood and sweat and heart-pounding of every day life, when you feel like your very sense of your self, your likability is on the line, but you stand up for what you know is true anyway.

Even adults can and often do stagger under the weight of peer pressure. We want others to believe we are smart, with it and cool, advanced and progressive in our thinking. How hard it is to hear disdain or ridicule in someone’s voice because they think your views are backward, your identity naïve, instead of worldly and sophisticated.

Our youth sometimes succumb to this pressure, leaving their parents reeling in pain. We know that pain. Yet the silver lining to this toxic environment where we send our children each day is that those who endure it become strong in ways they never would were they swimming in less icy water.

Those who can be true are a breathtaking generation.

It is easy to create your identity by looking left and then right and doing or thinking what everybody else does, but it is the way of a fool. The only way to know who and what you are is by looking up. When the relationship our teenagers have with God is more tangible and more sweet than anything else that is offered around them, they can stand strong.

As parents who love our tender children that are thrust out into the world every day, that is what we pray for, and pray unceasingly.

Remember my child—and if they are ridiculed and marginalized, please dear Lord, rush to their side and whisper, “I am with you. You’re not alone.”