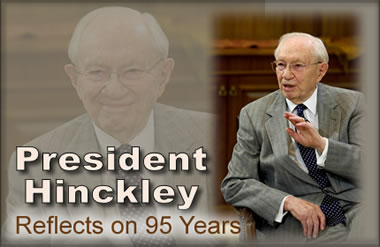 SALT LAKE CITY — President Gordon B. Hinckley is a man who doesn’t know the meaning of the words “rocking chair.”  The prophet, who is the leader of nearly 12.3 million members of The Church of Jesus Christ of Latter-day Saints, used the occasion of his 95th birthday to announce a world tour. 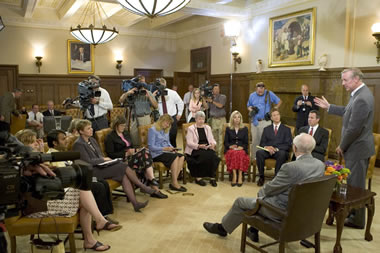 Speaking at a press conference, he announced a 13-day tour that will take him to four continents, with special emphasis on Asia.  He will also dedicate the Aba, Nigeria, Temple during one of two stops in Africa.  President Hinckley is already the most traveled of Church presidents.  This tour will allow him to meet Saints in such far-flung areas as Paris and Rome, Vladivostok, Seoul, Taipei, Hong Kong, New Delhi, and Anchorage.

When asked what most pleased him about reaching the age of 95, President Hinckley quipped, “I’m pleased that I’m still alive.” 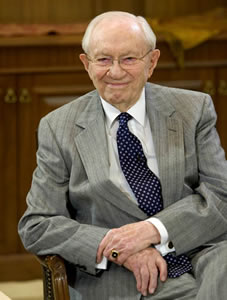 “The secret at this age is to keep busy,” he explained.  “Work, work, work is the best antidote for loneliness, incapacity or any other thing that happens to impede your progress. That’s the only antidote I know. It’s work that has saved me and has been an offset to the sorrow and loneliness I have felt.”

President Hinckley’s 95th birthday today will be celebrated privately with family members.  Notably absent from the festivities will be his beloved wife Marjorie.  She died on April 6, 2004, and he is still feeling her loss. During their 67-year marriage, he said the two of them never had “a serious difficulty between us.”  In fact, he added, “it would be a vastly different world” if every man were as blessed in marriage as he had been.

Although the actual birthday is going to be a quiet family affair, there will be a huge celebration of the event on July 22nd.  Immediately before the world tour, President Hinckley will be feted with a gala celebration at the LDS Conference Center.  Mike Wallace of television’s “60 Minutes” will be a guest, and there will be performances by Gladys Knight as well as the Mormon Tabernacle Choir.

Despite the hoopla, President Hinckley is not planning his 100th birthday party.  He said that after he has lived as long as he can, he plans to “cash in.”  He has no worries about death, for two reasons.  First, he knows that the Church will be left in capable hands.  Second, he has a firm knowledge that our existence continues beyond this life, and that he and his beloved Marjorie have an eternity of joy ahead of them. 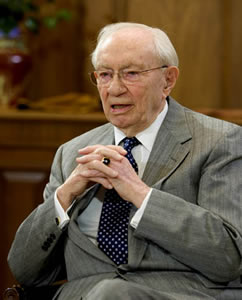 “The Church is organized in such a way that the transition from one president to another is a very simple, straightforward thing,” he said.  “The one who succeeds me will have worked with me for a very long time. He’ll know all I’ve tried to do and know all about it. Things will continue on much the same way we’ve tried to do.”

As for his own future, he said “I have an assurance of immortality of the human soul.  There’s no question in my mind we’ll go on living after we leave here. I don’t dwell on it a lot. I just accept it and move forward.”

When he isn’t “moving forward” in his private jet, the church leader has taken to walking with a cane.  With his characteristic sense of humor, the Prophet told reporters he carries a cane to look fashionable.  After all, he added, other prophets have used canes, and he might as well “stay in style” with them. 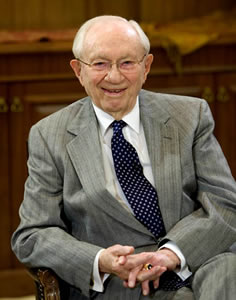 But the cane hasn’t slowed him down.  During his stewardship over the Church, more than 51 million copies of the Book of Mormon have been distributed worldwide.  The missionary program of the Church has been streamlined, and a worldwide humanitarian program has been launched to help Church members receive the benefits of education.  The LDS Conference Center has been planned and constructed.  And there is undoubtedly more to come.

“People die when they don’t have any challenges,” President Hinckley said. “That’s what keeps me going. I’m so grateful to have something to do every morning when I wake up. There’s always more to be done than I can get done.”

The biggest challenges faced by President Hinckley are the same challenges we all face as members of the Church.  The breakdown of the traditional family is a big concern for the Prophet, as is “reconciling our faith with the growing secularism in the world.  We see it all around us,” he said.  “The challenge we face is to build faith and move forward in the face of these tremendous, powerful forces with which we are constantly dealing.”

Despite the grim headlines that greet him in the daily newspaper, President Hinckley radiates cheerfulness — a quality he wishes every Church member would have.  “I’m an optimist,” he said.  “If you dwell on the negative, it will hurt you, depress you, and even destroy you.  If you work on the positive and dwell on it and seek to bring it to pass, it will make you lighter and brighter, younger and even more vigorous.  That’s my feeling, and that’s my program.”

When asked what he ponders in his private moments, he responded, “I don’t know. I haven’t pondered on that question.”  After the laughter subsided he added, “Oh, I don’t know. I ponder many things — but when you ponder, don’t ponder so long that you fall asleep. Ponder and then go to work.” 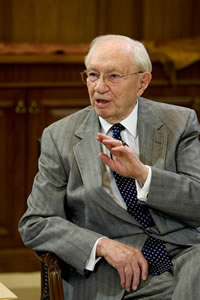 The Prophet follows his own advice about doing rather than pondering.  “It’s keeping busy that’s kept me alive,” he explained.  “People die when they don’t have any challenge. I’ve had a challenge all of these years, and that keeps me going. And it’s wonderful, really. I’m so grateful to have something to do every morning when I wake up.

During the interview, President Hinckley discussed the continuing growth of the Church during his tenure as its president. During his decade of leadership, the Church has added three million members, 4,000 new wards, and 400 new stakes.  There were 47 temples in operation when President Hinckley became prophet in 1995.  The dedication of the Aba, Nigeria, Temple will bring the number to 121.

“I think our accomplishments the past ten years or so have been rather remarkable,” he said, “and I hope they will continue to be so. We still have a lot of problems, and we’re still reaching out across the world.  We have great plans” for the future, he added.

When asked what he wants people to understand about the Church he leads, he responded, “I’d like to speak to the whole world and declare the goodness of this Church and the strength of its programs and the desire of its leaders to cultivate peace and goodwill and harmony and good relationships among the diverse peoples of the world.”

He also had a message for Church members who are facing trials in their lives.  “My heart reaches out to all who are unfortunate, who have serious problems, who are bowed down with grief, who just seem to have so many difficulties,” he said.

“You just have to make the best of it. You do the very best you can with what you have and leave the rest to the Lord. And that’s really all you can do.”
No Comments | Post or read comments