Latter-day Saints will love this new cinematic spree into Narnia. 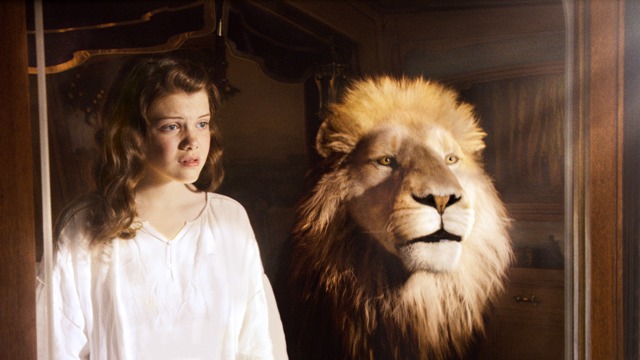 The magic and wonder of Narnia returns as The Voyage of the Dawn Treader, the third film in the series based on C.S. Lewis’s beloved children’s books, opens in theaters just in time for the holiday season.  In this tale, the Pevensie children, Lucy and Edmund, along with their hateful cousin, Eustace Scrubb, are sucked into Narnia via a picture on the wall, where they enter the magnificent ship, the Dawn Treader, and sail on a courageous adventure that holds the very fate of Narnia in their hands.

Their travels to various islands will not only test their courage, but teach them the nature of temptation and reunite them with Prince Caspian, the noble mouse Reepicheep, and most important, the great lion Aslan.  It is a must-see, satisfying film that brokers delight, exceeding Prince Caspian, which preceded it. 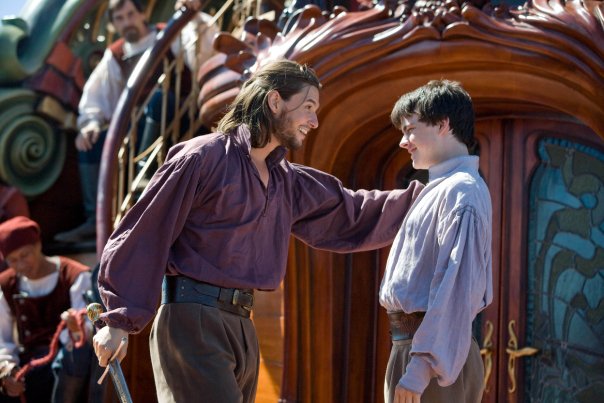 The 3D adventure is a lush, richly-imagined film portrayal that, for nothing else, would be eye candy with a flying a dragon, a sea serpent and islands with enchanting contours and magical creatures, but there is a larger question.

Devotees of the Narnia stories—and we are a loyal bunch—wonder if a movie can do justice to the books, particularly the underlying spiritual  messages that are clearly Christian. Movie producers will explore almost any theme, but the reluctance to explore truly spiritual themes, to touch religion, is a reflection of the materialism of our age. 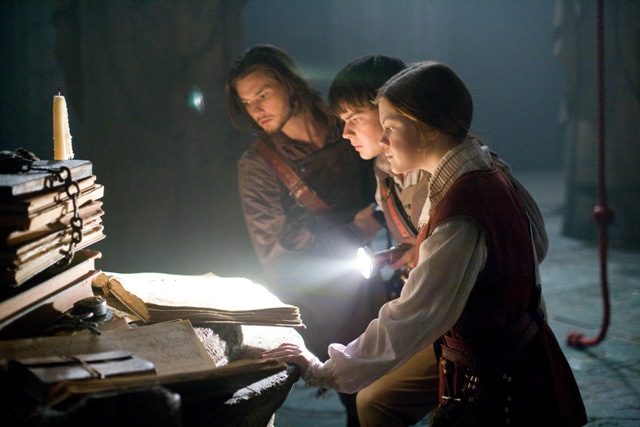 Indeed, materialism—that philosophy that reduces human beings, moral beliefs and even reason itself to purely physical processes like the biochemistry of our brains was a great worry to C.S. Lewis and a major theme in his writing. Lewis had something to say about the rejection of reason and objective truth and the debunking of objective morality.  He believed a materialistic understanding of human nature was leading to devastating consequences for humanity.

But, the spiritual themes in The Voyage of the Dawn Treader are alive and well, and in great part this is due to Douglas Gresham, C.S.Lewis’s stepson, who was the executive producer of the film and who sees himself as the guardian of Lewis’s legacy.

It’s a hot seat to be in when transferring beloved stories to the big screen.  On the one hand, fans will howl if their favorite part isn’t exactly replicated from the books and on the other hand, the film makers didn’t always want to include the theological or moral messges from Lewis’s work in the film.

He succeeded well on both fronts. 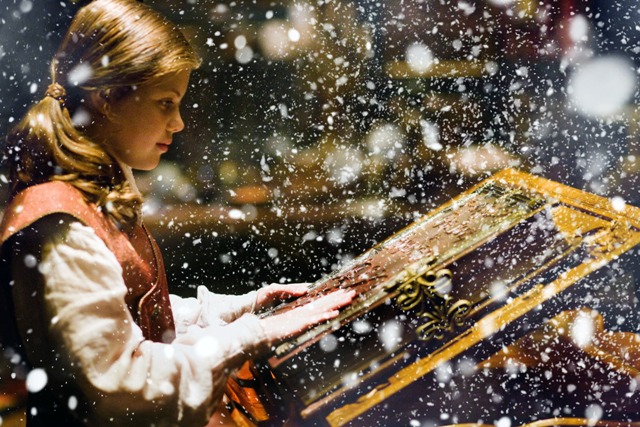 On including the underlying spiritual messages:  He said he didn’t always win every battle.  It wasn’t an easy job.  Sometimes he had to compromise. “I’m not always diplomatic; sometimes I’m pretty blunt.”  Sometimes, he said, he made a nuisance of himself, but there are things he insisted on.

It’s not so much that Hollywood people want to take the theological or moral messages out, but they just don’t see the importance of them, he said. Lewis knew, however, that “in their stupidity”, Western societies had abandoned the great nineteenth century values that were so important—personal responsibility, commitment, courage, chivalry, courtesy, and so Gresham said, “I fight for those fairly hard.”

When Lucy, Edmund, and Caspian are told, “You have an extraordinary destiny, greater than you could have imagined,” and “You are all about to be tested,” the words ring with a resonant familiarity.

For those who loved the stories, what are the strengths and weaknesses of transferring the book to film, a very different medium? 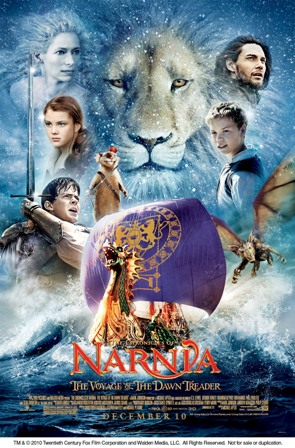 Gresham said the strengths were that the film offers “beautiful imagery, excitement and high drama.”  He has wanted to make films of these stories his entire life, but until now, we didn’t have the technology to create the lavish, imaginary world of Narnia with its fantastical creatures and settings.

“We couldn’t have done it earlier, if we had tried.  Even now, to create the effects, we push the technological envelope right to the end. The effects in the film are staggering. Consider the star of our movie is an 18-inch swashbuckling mouse, and he comes across beautifully.” 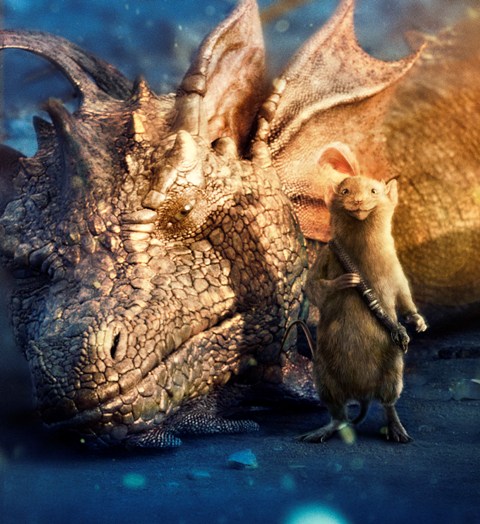 The film makers also are able to create a final scene that is truly touching with two CG characters—Aslan and Reepicheep—no small task. “It turns out to be one of the beautiful moments in the silver screen,” said Gresham.  “The lines are all in the book.  It takes great skill to make it inspiring. I don’t think it has ever been better.”

What is lost, says Gresham, is the magical beauty of C.S. Lewis’s own words. “You can’t capture them in film.”

I watched The Voyage of the Dawn Treader with great interest to see how they would handle my very favorite scene from all of the Narnia stories, and the film touched on it lightly, eliminating for me, the central idea.  However, at the same time, some aspects of the film, I found more intriguing than the book.  The film seemed less episodic and more centralized around its theme.  I found the film so delicious  that I carried its charm and poignancy with me as I left the theater and back into the bright light of day. 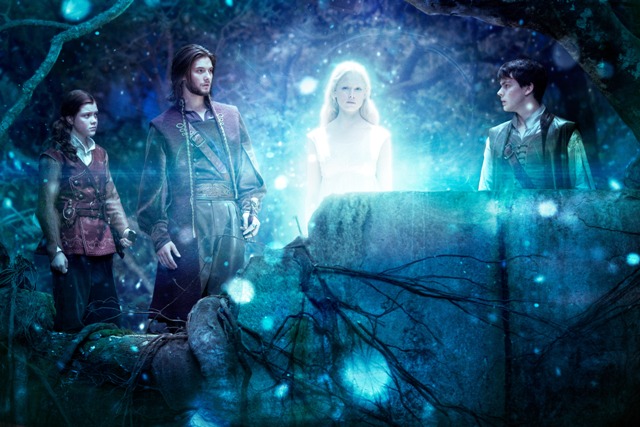 I asked Douglas Gresham why C.S. Lewis, with his concerns about the moral direction of the 20th century and his ardent Christianity had chosen as one of his tools of expression of these ideas a series of children’s stories.

He said, “Can you think of any better way of doing that? This choice extends back to a conversation that Jack [Lewis] had with J.R.R. Tolkien when they were dons together at Oxford. They said that nobody was writing children’s books the way they ought to be written or that we would have wanted to read ourselves.  In response Jack wrote The Lion, the Witch and the Wardrobe and Tolkien wrote The Hobbit and then went on to write The Lord of the Rings.  When Jack started, he had no idea he was going to write a series, but, of course, Aslan had other ideas.  He continued writing them until he quite deliberately brought the series to an end by writing The Last Battle. 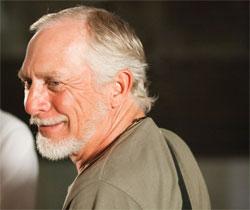 Gresham said that people may think of C.S. Lewis as being sort of a dour scholar, locked away with his books.  In reality, “he was terrific to be with, always laughing, and had a way of turning everything to be fun.  He embraced life heartily”.

This film is fun, too, a holiday confection, that doesn’t lose the things that were important to Lewis.

Maurine Proctor is the Editor-in-Chief of Meridian Magazine.