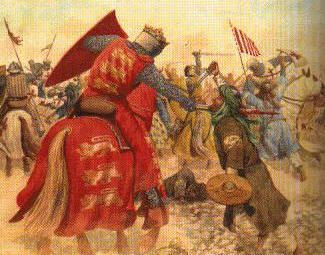 Latter-day Saints are reminded that contention is the default setting of the natural man, and that religious history is rife with violence.

Philip Jenkins, the renowned historian, has observed that Christian orthodoxy “was hammered out in a process that was painfully slow, gradual, and often bloody” (2010, p. 17). Over the centuries of the early church councils, bishops and churchmen fought to keep the doctrine pure. They feared the wrath of God if they allowed it to be tainted by false doctrine. They were quite willing to use violence to intimidate or destroy those they saw as heretics.

“Monks especially served as private militias, holy head-breakers whom charismatic bishops could turn out at will to sack pagan temples, rough up or kill opponents, and overawe rival theologians” (Jenkins, 2010, p. 28).

Over the decades and centuries, official doctrine swung wildly depending upon which faction was best armed, best connected, and most willing to be violent. “Throughout the fifth century, the outcome of church debates depended absolutely on gaining the favor of the imperial family—and especially the royal women” (p. 101).

Ramsay MacMullen, the prominent professor of Roman and Christian history, estimated that many people died in these doctrinal squabbles. “Our sources for the two and a quarter centuries following Nicaea allow a very rough count of the victims of creedal differences: not less than twenty five thousand deaths” (2006, p.56). Jenkins wryly observed that “in any theological struggle, the first thousand years are always the bitterest” (p. 234).

Who knew that theology could be so violent?

Herbert J. Muller, the American historian, wrote that “the First Crusade…set off on its two-thousand mile jaunt by massacring Jews, plundering and slaughtering all the way from the Rhine to the Jordan.  ‘In the temple of Solomon,’ wrote the ecstatic cleric, Raimundus de Agiles, ‘one rode in blood up to the knees and even to the horses’ bridles, by the just and marvelous Judgment of God!’” (Peters, 1977)

It is estimated that at least one million innocents were killed in the crusades. The inquisition took another 350,000 lives. Witch-hunting is estimated to have killed between 100,000 and 1 million people. Apparently Christians are quite as glad as any group to kill their enemies.

It should cause us profound pain and deep reflection that the followers of Jesus have so often been willing to kill each other and those we saw as wicked. The Mountain Meadow Massacre reminds us that we LDS are not completely exempt from this unholy tendency.

Unfortunately contention has not been limited to ancient theological squabbles or medieval conquering. Contention was apparently even a problem among the relatively righteous people visited by Jesus in the Americas. His first order of business after properly introducing Himself was to state that the members of the First Presidency of Heaven are completely united (3 Nephi 11:27). We might wonder why Jesus felt that He needed to state the obvious. I suspect that there is a reason he said what we should have known. The members of the godhead are not mild personalities. They most certainly have strong opinions. Yet we never imagine the Father, Son, and Holy Ghost having a heated debate, falling into sullen silence, or resorting to heavenly violence.

Perhaps Jesus is making the point that they are united because of their perfect goodness not because of milquetoast mildness. And, as our goodness grows, each of us will be less vulnerable to contention even if we have very strong opinions.

In true human fashion, those early Americans were apparently arguing about a simple doctrine and practice, the details of baptism.

There should be no disputations among us. Rather than kill each other over doctrinal differences, Jesus is inviting us to follow heaven’s directions and to treat each other gently. Incidentally, Latter-day Saints have a glorious advantage in doctrinal deliberations. We have prophets to teach us! Think how blessed that is in contrast to the human tradition of debate, heckling, bribery, and influence-buying.

For verily, verily I say unto you, he that hath the spirit of contention is not of me, but is of the devil, who is the father of contention, and he stirreth up the hearts of men to contend with anger, one with another.

When we contend with each other, we are doing Satan’s work.

We may think we are defending truth and goodness. (Humans always use that excuse!) But if we are stirring up contention, we are doing Satan’s work—whether we are a radio commentator, a TV superstar, a member of a gospel doctrine class, or a disappointed spouse. When we have the spirit of contention, we have alienated ourselves from God.

Behold, this is not my doctrine, to stir up the hearts of men with anger, one against another; but this is my doctrine, that such things should be done away. (3 Nephi 11:30)

Contention is the default setting for the natural man. This applies not only to large groups of people in historical time but also to all close relationships today.

There is a very orderly progression that leads to contention:

1. We have an opinion. Check. That is almost universal among humans.

2. We think we’re right. Humans have what psychologists call naïve realism. Each of us fails to see the ways in which our own views are limited and distorted by bias. So each of us believes that we get it right—while no one else does.

3. Someone else has a different view. This is inevitable. Given a different set of experiences and different perceptual lenses, each of us will see things differently.

4. We think they’re wrong. This is a small but vital step on the way to contention. Rather than trying to benefit from others’ perspectives and experiences, we simply want to them to listen to us.

5. We see it as our job to correct them. Another small but vital step. I think there are three preconditions to righteous correcting: a. we have a stewardship that justifies our correction; b. we genuinely love the person we aim to correct; c. we have prepared ourselves to correct with a spirit of gentleness, meekness and love unfeigned (See D&C 121:41). When we fail to restrain our correction after falling short on these tests, we are growing the spirit of contention.

6. We correct with a closed mind. We really don’t want the person to muddle our sensible position with irrelevant nonsense; we do not want to listen in order to appreciate their perspectives. We simply want them to submit to our superior truths. We are impatient. We even begin to vilify the opponent. “Maybe they’re not honest. Maybe they’re evil.”

7. We allow their resistance to make us more determined and aggressive. Rather than pause to understand, we stomp on the accelerator. We become like Tom Cruise on a motorcycle.

Contention is underway! It is easy to see why contention remains so popular. It is so natural and satisfying. It also serves Satan’s purposes magnificently.

As the examples from early church councils and the Crusades illustrate, contention is most vile and indefensible when it claims a holy cause.

Let’s consider casualties of contention that occur close to home. In our wards we may stir contention with others because they do not do as we think they should. For example, we sometimes shame people because they do not dress modestly. We generally fail to factor into our thinking the offenders’ backgrounds, budgets, and intentions.  And we may hold them accountable for creating inappropriate thoughts by the way they dress instead of holding ourselves accountable for managing our lust. Jesus does not call us to shame His children or generate conflict in His name.

Contention is also commonplace in family life. When our spouses irritate or disappoint us in some way, we rub salt into their wounds: “You’d think that you would remember that by now!”

With our children we often turn an invitation to make a righteous choice into an insulting sermon: “Why do you always . . .? Why can’t you ever . . .?”

What a tiring tradition is contention! What an offence against God and humanity.

God commands us to care for the poor. There are people like me who worry a lot about this. I give a generous fast offering and worry about how to help panhandlers. I donate to funds that help people with their utility bills but get fatigue from the onslaught of solicitations from various causes. I fear that I am not doing as much as God would have me do.

Arrayed against the mandate to care for the poor is another principle: It is a virtual article of faith in the LDS community that government intervention should be minimized. We seem to experience every new intrusion as the final end of freedom.

We talk of falling into the socialist quagmire. As inheritors of the godly gift of agency, we are properly jealous of our freedom.

Both compassion and freedom are eternal principles. Both should be honored. I fear that the more extreme spokespeople on either side of the argument tend to speak of one value as if it were the only value. In order to make our point, we neglect other god-given principles. This not only generates never-ending contention, it also guarantees that we will not solve our problems.

One of the key principles in dialogue is the assumption of good faith. Even if another person is mistaken or misled, I do not have the right to vilify his or her intentions. It violates the core commands of Christ when we create damning back stories for those with whom we disagree. Whatever that person’s offences, we become greater offenders (See D&C 64:8-10) when we judge them in such ways.

Being followers of Jesus should cause us to be less contentious in our political and personal discussions—even when we have strong convictions. The Jesus who commands us to love our enemies, sets a high standard for our relationships: “By this shall all men know that ye are my disciples, that ye have love one for another.” I suspect that this applies to our relationships with those with whom we disagree. In fact the surest evidence of our conversion may be our respect and compassion for those with whom we disagree most ardently. (Remember Pahoran’s glorious response to Moroni’s rebuke!)

When we refuse to let contention derail our discussions, we may find creative solutions. Even when we differ with others, if we honor their right to their perspectives, we might learn from each other. We might gain insights on ways to peacefully advance our agendas. For example, those who believe that government involvement in caring for the poor should be minimized might choose to pay a substantial increase ($1,000? $2,500, $10,000?) in annual fast offering and humanitarian donations. This might not solve the problems of poverty in the country, but it might show the Lord that we are earnestly trying to do our part to care for the poor while defending our freedoms.

Early Christians fought each other in a misguided—and ultimately futile—attempt to keep the doctrine pure. In the latter-days the scriptures instruct us that the way to uphold Christ’s doctrine is to purify ourselves of anger and argument. The ultimate cure for contention is to have our hearts changed. When there is peace in our hearts, there is sure to be kindness in our conversations. One day we may conquer every problem because of our respect for each other and our willingness to work together in Christ-like harmony. We may one day be a Zion people, of one heart and one mind, living together in peace.

Thanks to Barbara Keil for her helpful comments and additions to this article.

You may be interested in Brother Goddard’s books such as Soft-Spoken Parenting, Drawing Heaven into Your Marriage, and Between Parent and Child.  For more information about his books and programs, visit www.FamilyCollege.com