Lipstick Wars: The Story Shouldnt Work, But Does | Meridian Magazine

Lipstick Wars: The Story Shouldnt Work, But Does 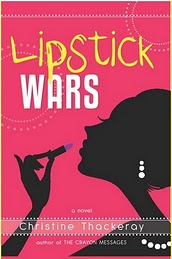 Lipstick Wars is a fun new book by Christine Thackeray, author of The Crayon Messages.  The story shouldn’t work, but it does.  (I love it when that happens!) The characters are exaggerated clichés, the main characters do little to work out their own dilemmas, several characters are stereotypes, it’s preachy, it’s largely based on misunderstandings, and comes with a happily ever after ending.  There’s one unresolved issue which I’m not sure whether it got lost or if it will be the basis for Thackeray’s next book.  It’s also a strong plug for Mormon women getting their visiting teaching done and the whole Visiting Teaching program.

Now, lest you think I don’t like the book, let me assure you it’s a great read.  It begins with a young mother being apprehended by the police for running around the neighborhood in nothing but a towel.  She’s the mother of two small children, a new baby and a not-quite-two-year-old.  The older child has developed Houdini skills and managed to escape the house while Mommy was in the shower and Daddy was sleeping.  Seeing, from the bathroom window, her small son running down the street sans clothes, what could Eden do, but go after him?  This little episode places Eden and her mostly oblivious husband under suspicion as unfit parents, provides a malicious neighbor with fodder for getting rid of the little family that doesn’t meet her snooty standards, and gets Eden’s assignment as a visiting teacher off to a rocky start.

Complications pile up as a mother of six longs for another baby, a sixteen-year-old struggles with knowing when or if an abuse situation should be reported, a wealthy, eccentric artist reclaims an old family estate in the neighborhood, a visiting teaching partner struggles with her inability to complete a pregnancy, another woman struggles with her desire to be seen as a polished upper crust woman and the reality of being a retired farmer’s wife, and a bitter, self-important woman who draws her identity from being the president of the homeowners’ association which she rules over as an absolute monarchy.

Eden is in over her head.  She works hard and loves her two small children, but feels insecure as a mother.  She grew up with no one but her single, career-driven mother who never had time for her. When she and her husband buy a small blue fixer-upper in a neighborhood comprised mostly of near-mansions and find themselves in a ward where everyone seems more competent than them and are certainly more wealthy, they feel out-of-place.  One neighbor’s determined campaign to rid the neighborhood of them and their rundown house adds to their sense of inadequacy and terrifies Eden that her children might be taken from her.  Eden’s husband is working long hours and is seldom home.  When he is home, he just wants to sleep.  Eden and three very different women are assigned as visiting teaching partners with two to visit the other two and round about.

The story is funny, but the more serious overtones come through loud and clear.  The characters are exaggerated, but are so appealing they feel real.  The plot moves quickly and keeps the reader’s attention.  For all of its humor, the Lipstick Wars is thought-provoking.  Young mothers will love this one and older mothers will wipe away tears of laughter and nostalgia.

Thackeray has worked as a market analyst and developed a phonics program for use in private schools. She is married and the mother of seven children.