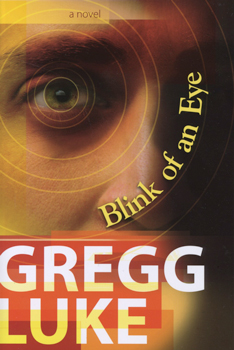 Blink of an Eye by Gregg Luke is an unusual book, especially for an LDS novel.  I’m not certain which genre to place it in.  It’s clearly psychological drama, but it’s also a mystery with strong social issue leanings, and there’s a hint of romance.  Whatever anyone wants to call it, it’s a tremendous and powerful story.  (For anyone wishing to nominate Blink of an Eye for a Whitney award ( https://www.whitneyawards.com/nominations.php ), I would suggest you call it General Fiction.  And for readers’ information, this year’s judges are getting nominated books as soon as the five nominations have been received, which helps judges a great deal because we don’t have to try to read a ton of books in a couple of weeks, that  is if readers start making nominations early.  Oh, and more than one book in any category can be nominated).

Joseph Ramirez grew up in Southern California, the fourth of five children.  His childhood memories are vague until about his tenth birthday.  As an adult of almost thirty, he’s a science teacher for a small town middle school, single, and pleased with his life, but one day while crossing an intersection his car is hit be a cement truck and he is crushed.  By some miracle he survives, but lies in a coma for three weeks.  As he begins the long road of recuperation, he begins to have dreams, more accurately described as nightmares, and he begins to wonder if the dreams are really dreams or are they snatches of memory from his first ten forgotten years.

A smarmy lawyer attempts to rush him into a paltry settlement and the school district sends an attorney to advise and represent him.  His family doesn’t want him to remember his childhood and he can’t understand why.  His mother loves him, but can’t accept his change of religions, why he wants to rediscover his childhood, or why he doesn’t settle down and marry the chubby, shy girl she has picked out for him, after all she’s a good Catholic girl and can cook.

Michelle Haas, the school attorney, is not only a smart, sharp attorney, but there’s an instant connection as though they’d know each other before.  The hospital, particularly the physical therapist, recommends he see a psychologist for help in dealing with his dreams.  He’s reluctant to do so, until his hospital roommate, a detective, and his dreams suggest he may have murdered someone. The sessions prove beneficial and little by little he discovers the truth about his past.

Luke has the strongest skill of any LDS writer I am familiar with in portraying clinical, medical matters in a manner non-medical people can understand.  His own medical field background, plus his close association with other medical professionals gives a strong stamp of authenticity to his writing.  He has a gift, too, for creating characters the reader can empathize with, understand, and accept for their strengths and weaknesses.  The storyline in this novel is compelling and centers around Joseph Ramirez’s growth and journey into regaining his life.  Though the novel is heavily medical/psychological in nature, the reader never loses track of the mystery element.  There are other subtle messages concerning duplicity, bigotry, and general unfairness in life that made me angry, as I’m sure Luke intended, but those instances increased the reality of the story and the “can’t put it down until I’m finished” appeal of the book.

Kudos to the art team who designed the fascinating cover for Blink of an Eye.

Luke, a native Californian is a pharmacist in Logan, Utah, where he lives with his wife and children.  This is an ideal location for a man who loves nature and music in addition to his love for medicine, reading, and writing.

BLINK OF AN EYE by Gregg Luke, published by Covenant Communications, softcover, 293 pages, $16.99