BOSTON – “I went to the woods to live deliberately,” wrote Henry David Thoreau in Walden. Some 150 years later, many literary aficionados go to the woods northwest of Boston to see where Thoreau lived with nature. 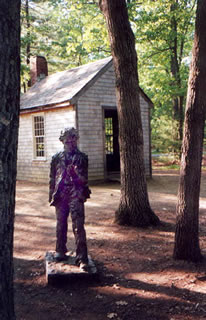 A bronze statue of Henry David Thoreau stands in front of a replica of the one-room cabin he lived in at Walden Pond, across the road from what is now a state reservation in Concord, Mass.

And they’re not disappointed. Walden Pond State Reservation, outside of Boston and a mile and a half south of Concord, delivers the idyllic scenes Thoreau fans expect: a clear lake surrounded by beaches, paths, and plenty of woods. Summertime finds people of all ages splashing in the pond. Across the road, you can step inside a replica of the one-room cabin Thoreau lived in 1845-47 and read excerpts from his transcendentalist writings.

The gift shop nearby carries T-shirts emblazoned with such thoughts as “Simplify, simplify” and “Time is the stream I go a-fishing in,” as well as a large selection of his works. The restrooms out back, true to the back-to-nature spirit of the place, feature compost toilets. (Check out www.walden.org  for info, directions and Walden-related products.) 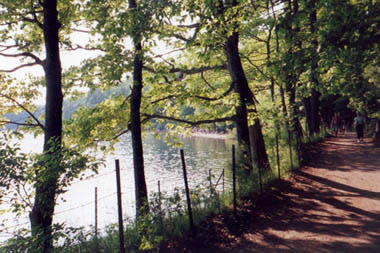 Walden Pond, a state preserve, is a popular swimming hole in summer.

Of course, Thoreau wasn’t the only well-known American author in these parts. Ralph Waldo Emerson, Louisa May Alcott, Nathaniel Hawthorne and their families have their resting place along with Thoreau’s on Authors’ Ridge in the sprawling, wooded Sleepy Hollow cemetery in Concord. Literary buffs could happily spend hours here. 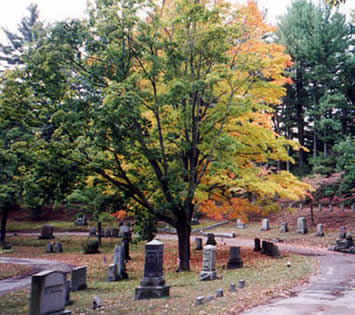 In Concord at 255 Main Street stands the three-story Greek Revival home where Thoreau lived from 1849 to 1862, and where he wrote Walden (1854). He subsequently sold the home to Louisa May Alcott and her sister, Ann Pratt, for their parents. Someone else lives there now, but it’s still worth driving by.

Not far away, on Lexington Road, is the Wayside, where the Alcotts lived from 1845-48. Nathaniel Hawthorne purchased the property in 1852 and lived here until his death in 1864. The tower which rises above the third floor was his writing sanctuary. The National Park Service gives tours here. 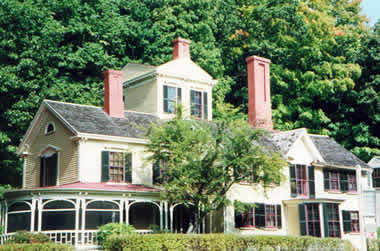 Just a stone’s throw from there is Orchard House at 399 Lexington Road. Louisa May Alcott penned part of Little Women while living here with her philosopher father. Tours reveal Alcott family memorabilia as well as period furnishings. (See www.louisamayalcott.org.)

Emerson and Hawthorne both lived for a time at the Old Manse, a Georgian Colonial home built by Emerson’s grandfather, minister of the First Parish Church and first chaplain of the Continental Army. Hawthorne immortalized the house in Mosses from an Old Manse (1846), which he wrote in the upstairs study. Tours are offered of the house and eight acres adjacent to the Old North Bridge in Concord.

Another three-story home with black shutters on Lexington Road and Cambridge Turnpike is the one Ralph Waldo Emerson lived in in 1835. Tours of the Federal-style clapboard house are available. 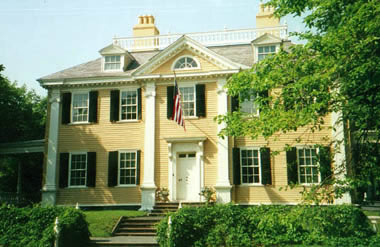 This clapboard home, recently restored in Cambridge, Mass., belonged to Henry Wadsworth Longfellow. George and Martha Washington lived here a century earlier at the beginning of the Revolutionary War.

Back in the city in Cambridge, a stone’s throw from Harvard, the yellow clapboard Georgian mansion which Henry Wadsworth Longfellow called home for 45 years is open again after major renovation and preservation. The National Parks Service offers tours, and if you’re lucky, it will be led by a ranger who quotes Longfellow’s poetry along with facts about the place.

The Old Corner Bookstore on School and Washington in downtown Boston now houses a store, but in days past it was frequented by Emerson, Longfellow, Thoreau and Charles Dickens.

For more information on the Lexington and Concord area, visit www.lowell.org, or call (800) 443-3332. For information on taking a half-day tour that focuses on the literary greats mentioned above, contact the Literary Trail of Greater Boston at (617)574-5950 or visit www.lit-trail.org. The tour also includes the Boston Public Library, Harvard University (September-December), the Concord Museum and Orchard House.