GETTYSBURG, PA. – The overwhelming impression is awe at the sheer expanse of the land, and the thought that thousands upon thousands of Americans lost their lives in these fields and on these hills at Gettysburg.

The pervasive silence that now covers Gettysburg National Military Park and Gettysburg National Cemetery is surely a stark contrast to the booming of cannons, the shouting of troops, and the whinnying of horses at the height of the battles that hot and humid July. 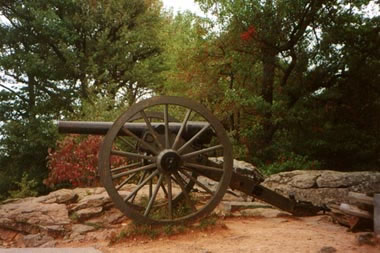 Cannon, fences and stone walls remain today much as they were during the fateful Battle of Gettysburg July 1-3, 1863.

Just a month after the victory at Chancellorsville, Confederate Gen. Robert E. Lee headed the Army of Northern Virginia north into Maryland and Pennsylvania. By chance, they ended up at Gettysburg at the same time as the Union Army of the Potomac, under Gen. Joseph Hooker.

The battle opened the following day as Confederate troops attacked Union troops (now commanded by Gen. George G. Meade) on McPherson Ridge, west of town. At the end of the day, the Confederates were clearly in control. Lee decided to keep his 70,000 men fighting against Meade’s 93,000.

Day 2 saw the men facing each other a mile apart on parallel ridges, the Union forces on Cemetery Ridge and the Confederates on Seminary Ridge. Despite losing ground, both flanks of the Union Army had held.

Saddest of all was Day 3, when an estimated 12,000 men under George Pickett marched across the open field toward Cemetery Hill. Two of every three men were cut down by Union fire.

The battle was over.

The dying and wounded would fill every available building, and the others would return home. The unclaimed dead, lying in shallow graves where they fell, would later be reinterred in a proper burial ground. President Abraham Lincoln would come to Gettysburg barely four months later, on Nov. 19, to dedicate the new cemetery, and the 272 words he delivered would become world-famous. 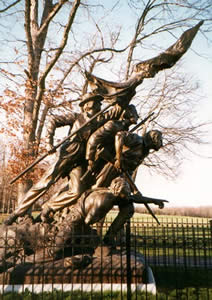 The North Carolina Monument, by Mount Rushmore sculptor Gutzon Borglum, is one of more than 1,4000 monuments and markers in Gettysburg National Park. Of the 800 in the North Carolina Infantry, the regiment reported 588 killed and another 120 missing on July 3.

Today, visitors to Gettysburg – more than 1.5 million per year – will find much of the battlefields as they looked in 1863, with fences, rocks and cannon still in place. The only additions are more than 1,400 monuments erected in honor of regiments from the North or South.

Among the most striking are the North Carolina Memorial, by Mount Rushmore sculptor Gutzon Borglum; the huge Pennsylvania Monument on Cemetery Ridge; and the Eternal Peace Light Memorial. At the National Cemetery, you can marvel once again at the succinct and immortal words Lincoln spoke here in 1863. 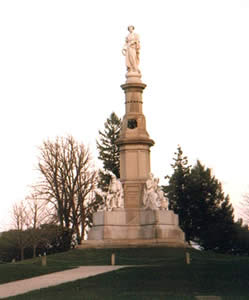 Abraham Lincoln gave his immortal speech at the dedication of Soldiers National Cemetery on Nov. 19, 1863, just a little over four months after the battle.

The visitors’ center, operated by the National Park Service between Taneytown Road and Steinwahr Avenue (about a mile south of Gettysburg), offers maps, tour information and Civil War artifacts in its free museum. (Ground has been broken for a new visitors’ center a mile up the road, scheduled to open in 2007.) There is an admission charge for the visitors’ center’s electric map describing the battle, as well as for the Cyclorama – a 360-foot-long oil painting of Pickett’s Charge, painted in 1884 – in a separate building. The Cyclorama Center also has a free 20-minute film and exhibits.

A self-guided driving tour takes visitors along 26 miles of mostly one-way park roads, with guide books or audio tapes offering explanations of significant action at various stops. The observation tower near the intersection of West confederate Avenue and Water Works Road offers an excellent view over the entire area.

The battlefields can also be explored on foot, as provided in the Big Round Top Loop Trail and also the High Water Mark Trail, which begins at the Cyclorama Center; each is about a mile long. Hardier hikers can try the 3.5-mile Johnny Reb Trail, used by Boy Scouts of America as part of their Heritage Trails program.

Regardless of how you see Gettysburg, it’s sure to be an experience that will long remain in memory. The words of Lincoln resound in the silence, and you know you’re on hallowed ground.

IF YOU GO: Gettysburg is 78 miles north of Washington, D.C., about an hour-and-a-half drive. It’s 118 miles west of Philadelphia and 55 miles west of Baltimore. Visitors’ center open 8 a.m. until 6 p.m. in summer, until 5 p.m. otherwise. Park open 6 a.m.-10 p.m. Cemetery open from dawn until dusk. For more information about the park, cemetery and tours, see www.gettysburg.com and www.nps.gov/gett. For accommodations, contact the Gettysburg Convention and Visitors Bureau, (717) 334-6274.