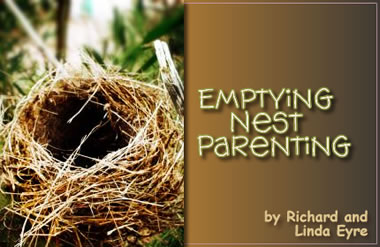 Let us begin with a story illustrating the spiritual as well as emotional power that can come from asking the right questions to the right source.

When I (Richard) was a mission president in London, I once had a young missionary who, in an interview, asked me a most interesting question: “What do you think,” he said, “is the most frequently repeated admonition in the holy scriptures?”

“Do you mean the thing God tells us most often to do?” I asked.

“Yes,” he said.  “What advice or counsel does God give the most often, the most repetitively?  What’s number one?”  (This elder was quite a scripture student and also something of a trivia expert and statistician.)

“Something to do with love or loving,” I guess.

“Then how about something to do with repenting?”

“To ask,” he said.  “God’s most frequently repeated admonition is to ask.”

I’ve thought a lot about that. The two of us, as parents and grandparents have thought a lot about it together.  If we are God’s children, and if He has placed us here on the earth to learn and progress through our experiences and our choices, and if God respects our agency by letting us take the initiative rather than Him, then our asking is the key to everything.  God wants to bless us, to help us, to guide us, but He waits for us to ask so it is our choice, out initiative, our learning and progress.  This is the point illustrated by the great Christian painting that shows Christ on a doorstep, knocking on our door, willing to come into our lives.  But there is not latch or handle on His side of the door.  We have to open the door from inside, from our side, by asking.

There are three powerful Empty Nest Parenting applications of this principle of asking, and if we understand and implement all three of them, we will meet every challenge and succeed at every opportunity that has been suggested previously.

1.  Make asking your prime conversational approach with your adult children.  Hold off on the advice, judgment, and criticism that jump into your head. Ask questions instead.  Don’t ask like an interrogator or a cross-examiner.  Ask like an interested friend.  Ask about feelings and hopes.  Ask about day-to-day activities. And when you really feel like you know what’s going on (and they really feel like you care), ask what you can do to help.

2. Ask them to ask you – and thank them for asking when they do.  Really discuss the important difference it makes when your adult children ask you for your advice.  It automatically makes you a helpful consultant rather than a bossy manager or a nosy superior.  When they ask, you can respond with love and without that uncomfortable feeling that you might be interfering or imposing.

3.  Ask God for help.  Most parents who have any kind of faith or belief in a higher power eventually come to two conclusions: First, parenting at any stage is a super-human task where we need all the help we can get from a higher source; and second, our children are really God’s children, so it is appropriate and natural  to ask for His help.  Parents, especially in times of intense worry and crisis, often find a level of faith and prayer beyond what they have known.  Rather than waiting for crisis, we should learn to pray more often and more consistently for help from our Father in wisely caring for His children.

Once you get the asking going, there’s one more thing: Listen!  Listen and then ask some more.  Ask and listen.  Listen and ask.  Make it your mantra and your motto.

Now, in the next installment of this column, we are going to do a rather risky and dangerous thing.  We’re going to use our own little empty nest family as a case study of some of the principles and ideas we’ve put forward in earlier columns. As you will see, everything hasn’t gone smoothly in our own personal empty nest parenting, but we’ve learned from our mistakes as well as our successes, and maybe you can too!  Let us conclude this installment with a few thoughts to prepare you for the case study to come.

There are two perfectly predictable ways to fail at empty-nest parenting, and most of us are headed directly for one of them.  Ironically, they are the exact opposite of each other, yet each is a virtual guarantee of a deteriorating relationship between you and your grown children.  One way to fail is to abdicate – to simply quit parenting once your kids leave home, to have no strategy or plan about how you will or won’t help, to step totally aside and give them complete independence unless they come to you with a problem, hoping you’ll find a way to help.  The other way is to arbitrarily lay down a pattern or set of standards – how much financial help they’ll get, what responsibilities they’ll take and what ones you’ll keep, all without their suggestions or agreement.

We’re thinking of one family we know who had a little send-off party each time one of their three children went off to college.  It was like a celebration, a bon voyage, a good-bye party for the child and a retirement party for the parents.  The one was, “Okay, we’re done.  Good luck!  Try not to bother us, but if you really need something, call and we’ll try to help.”

Another family was the complete opposite.  With the help of his attorney, the father drafted a document that laid out not only a trust account and a precise schedule of when his children would receive what funds, but also a schedule of when they would visit home, when and how they would communicate by phone and e-mail, how he expected them to budget their time and their money, and where he expected them to be in their professional careers by the end of the decade.

Most parents don’t do it this distinctly, but most do gravitate gradually toward one or the other of those two extremes – to abdicate or to arbitrate. Once again, both courses are guaranteed to drive parents and children apart!  What is needed instead is a carefully planned and communicated middle course involving a well-discussed and agreed-upon strategy of how the relationship, the independence, and the assistance will evolve as the child goes through the phases of moving out, going to school, working, and starting his or her own family.  It is like a spectrum where we need to pull ourselves to the middle rather than be sucked to the Abdication end or the Arbitrate end.

We hope that you will be attracted to the middle possibility which is the opportunity and the joy of communicating and working with your adult kids to develop a plan for your ongoing relationship with each other.  We also hope that you develop a real fear of the two extremes and realize that abdicating or arbitrating can erode family relationships and eventually cut off parent from child and child from parent.

Join us next column for what is perhaps the most worried-about part of empty nest parenting……the financial aspects.  How do you balance ongoing assistance with the need for independence?  How do you know where help really helps, and where it hurts?  See you next column.