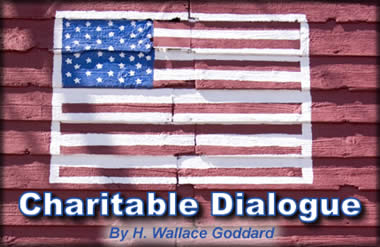 Sometimes I wonder what tricks and ploys Satan uniquely uses against Latter-day Saints. I suspect that one of Satan’s most treacherous tools with Latter-day Saints is to have us advance worthy purposes in unworthy ways. That is exactly what Satan himself proposed in the pre-earth council. I think he still advocates that same approach. Consider the American political landscape – and our response to it.

Some years ago the Supreme Court ruled against prayer in the public schools. I remember being carried along by the popular opinion of the time: “Godless justices are pulling the rug on American morals.” Many decisions since that time have seemed to advance the American slide into amorality.

Something important happened to me in the mid-70’s. I was required to read the Supreme Court’s school prayer ruling as part of a class assignment. I was stunned. There was a coherent logic to the ruling. Even though I might prefer a different outcome, I thought I could feel the justices wrestling with the critical issue: Can we institute any religion (or any religious practice) in national politics and still show respect for people with different religious views? If we truly feel charity for people who are different from us, it is a challenging question.

Our Way or the Highway

The school prayer issue has flared and subsided several times over the years. It resurfaced recently in a priesthood meeting I attended. The teacher came armed to energize our patriotism. He decried the loss of prayer in public places. I understood his feeling of loss. But I felt a real discomfort as he pressed forward with the logic chain:  “Eighty-five percent of Americans are Christian. We should tell the other 15% to take a seat and shut up.”

The comment seemed ironic in an LDS meeting. It wasn’t so many years ago that we were driven from Ohio, Missouri, and Illinois because we were different from our neighbors. Even today we are a small part of any country’s population. Should we be told to take a seat and shut up?

“We claim the privilege of worshiping Almighty God according to the dictates of our own conscience, and allow all men the same privilege, let them worship how, where, or what they may” (Articles of Faith, 11).

As the teacher’s words echoed in the chapel, I expected some signs of protest from class members. I was disappointed. Rather than activate concern, the comment launched a growing landslide of complaint. Several class members complained about stupid legislators. A high priest complained that our legislators have forgotten whom they represent and several nodded assent. One brother worried about the moral future of the nation. “There are only two churches: the church of God and church of the devil. If we don’t support the church of God, we belong to the church of the devil.” The message seemed to be that the country must be uniformly and explicitly Christian.

The discussion did not feel very godly or charitable to me. While I believe that Jesus should be the God of the American people, I don’t think that compulsion is the right method. I believe that Jesus would have us treat Samaritans, publicans, sinners, foreigners, Muslims, and even Democrats with love and respect.

I have thought quite a bit about that priesthood comment: “Eighty-five percent of Americans are Christian. We should tell the other 15% to take a seat and shut up.” I think I am ready to respond to the comment without being counter-inflammatory.

The Issue of Being Informed

Before we protest the decisions of the courts, do we read them? Do we consider carefully the rationale for the decision? Do we think of ways to address both sides of the issue so that we can suggest solutions that honor people with both views?

I think we should do our homework – and be humble. Of course there will be times when intelligent people disagree. But a tirade is a poor excuse for informed and balanced dialogue.

The Issue of Example

I wonder what the result would be if each of us who is upset about the absence of prayer in public life were asked about prayer in our homes and personal lives. Do we have family prayer daily? Do I personally commune with Father regularly? Do I work earnestly to have effective home evenings so that my children will have a solid moral foundation? Is my love of the scriptures evident in my life and discussions with all family members? Do I strive to be an example of a disciple of Christ so that the Gospel of Jesus Christ is more than academic in our home?

If we are not actively maintaining Christian practices in our homes, it is painfully ironic to expect that they be maintained in secular settings.

The Issue of Unity

Jesus said, “I say unto you, be one; and if ye are not one ye are not mine” (D&C 38:27). Martin Luther is reported to have said that “the Kingdom of God is like a besieged city surrounded on all sides by death.  Each man has his place on the wall to defend and no one can stand where another stands, but nothing permits us from calling encouragement to one another.”

We should look for good in all places and rejoice in it – whether it is family devotion in an Islamic family or sweet humility in our own child. Rather than turn our energy to hurting each other, God invites us to bless each other.

The Issue of Charity

Jesus provided a challenging test of discipleship: “By this shall all men know that ye are my disciples, if ye have love one to another” (John 13:35). If we don’t have love, we are not His disciples. The spirit of accusation and blame is not inspired by Him – even or especially when we are dealing with people who are different from us.

Nancy and I have a dear friend, Barbara, who has shared a poignant and powerful story with us. I share it with her permission:

My good friend and roommate during the first two years of college was a girl named Ricki from Brooklyn, New York.  She is Jewish.

One weekend morning I woke up to find pictures of fire covering our dorm room door.  I took them down and went to speak with the probable messenger. The girl down the hallway who went out of her way to let people know she was an Evangelical Christian admitted she had been the one who put them there. She said it was her duty as a Christian to warn Ricki that if she did not accept Jesus, she would go to an eternity of fires and damnation.

I asked her if the Jesus she knew would support her methods.  I posed the question, “How could Ricki possibly come to know Him if we, supposedly acting in his name, approach her with judgment, condemnation and spiritual arrogance?  How is that a message of Good News?”

I went to spend the Christmas season with Ricki and her family.  I learned that her grandparents imigrated to the U.S. from Russia after they were literally chased out of their home at gunpoint, their lives threatened, because they were Jewish.

store that sold Kosher food so that I could surprise her with the food necessary for a traditional Passover meal.  When I returned, I discovered she had walked to a bakery to buy me a specially decorated cake to help me celebrate Easter.  I suspect the Savior would have been just fine with the spirit in our dorm room on that day as we jointly celebrated our faith in God.

I think Jesus would be delighted that a Jew and a Christian could show kindness and consideration in such a beautiful way. Maybe, even now, we can earn the title of disciples by loving as He loved. Then we can follow His plan for wise and loving influence rather than Satan’s plan for harsh rhetoric and stark confrontation.