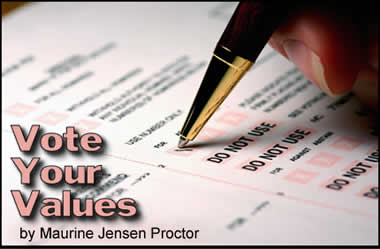 The election in the United States is only a few days away and the future of the family is on the line. Many races are tight and the addition of a few volunteers helping to get out the vote may make a significant difference. We urge you to study the candidate’s positions on family issues in every race, both local and national and volunteer to help at www.anxiouslyengaged.org , a site created by and for Latter-day Saints. If ever there were a time to stir yourselves to action regarding the world your children and grandchildren will know, this is it.

This is a watershed election in the United States. In races on every level from the Presidency to local legislators, it is a continental divide of a time with the river of our national life running one way or the other from this time forward.

Critical issues lie before us. As residents of Washington D.C. who live in the shadow of the Pentagon and see electronic signs over the highway in times of high alert saying, “Report any Suspicious Activity,” we know firsthand the threat of terror.  Economic and health care concerns scream at us every day.

Yet, when this year’s economic and healthcare issues are only a page in history, after the long, long battle to subdue terrorists seems contained, one issue will have been paramount from these times and will forever profoundly affect the world.

It will be what we have decided about the importance and future of marriage and family in our society. We will have chosen what our children ten years and then hundred years and beyond will be taught about marriage. We will decide what they will learn in school about their identity and their destiny.

We will have affirmed that children deserve to be raised with a mother and father or we will fly in the face of over 2,000 social studies about the healthiest way for children to be raised and redefined marriage until it no longer has the same power in our nation.

If marriage is redefined, there will be not word in the English language that means the committed union of a man and a woman.

No matter what else you had on your calendar for the few days leading up to the election, it will not have the same seismic importance as working to elect candidates who support family and life issues, particularly a Constitutional amendment on marriage. Go to www.anxiouslyengaged.org and join the swelling army of people who care about what you do.

Journalists and candidates come to think, “We don’t need to pay attention to those family-centered people. They don’t care.” Or, despite how clear the polls are that the majority of Americans care about the definition of marriage, they can get away with saying that those who stand for family are on the fringe.

Our Nation on the Line

Yet, it is not only the family itself that is on the line, so is the future of our nation. Economists say a nation’s financial strength is based on its human capital-those people who have grown up strong and able, competent and disciplined who can create businesses and ideas, who are willing and able workers-the kind of people, on the whole, who grow up in strong families.

The political philosophers who inspired the Founding Fathers of our nation believed the only way to have a free nation was to have a moral citizenry-the kind of people who have been taught values in their homes and don’t have to have undue regulation to maintain stability.

Social scientists have accumulated stacks of data demonstrating that the health of a society depends on the health of the home-and where that is lacking bigger government steps in to fill the breach.

However convincing these arguments are, something that stands above all the rest for Latter-day Saints are the words of the prophets.  In The Family: A Proclamation to the World given to us in 1995 from the First Presidency and the Quorum of the Twelve, we hear this chilling line, “We warn that the disintegration of the family will bring upon individuals, communities, and nations the calamities foretold by ancient and modern prophets.”

The disintegration of the family begins with the dissolution of marriage.

The First Presidency, as you know, are very prayerful and thoughtful before issuing statements, yet last summer, this brief statement was given: