"I Will Remember...Thee" | Meridian Magazine 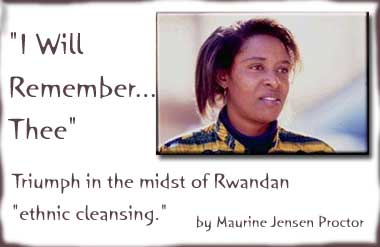 On the surface, April 6, 1994 was a day like any other in Kigali, Rwanda when Immaculee Twagiramungu allowed her teenage daughter and only child to leave the military base where they lived and visit a friend in the city. She could not have known that within hours one of the bloodiest civil wars of this century would erupt between Rwanda’s rival tribal groups–the Hutu and Tutsi or that the city where she had sent her daughter would become a war zone of random butchery and senseless killing.

Tribal tension and hatred between the willowy Tutsi and the stockier Hutu had haunted Rwanda for many years, but on this night a plane carrying President Juvenal Habyarimana, a Hutu, was shot out of the sky, plunging into the presidential gardens and killing the occupants. Within minutes of the crash, soldiers of the presidential guard, took to the streets, rallying mobs of young boys and men to begin hunting down Tutsis and slaughtering them randomly. The hours and days ahead became a frenzy of killing. Even women with babies strapped to their backs were hacked down in the streets. Hutu gangs, on a blood lust, moved from house to house butchering every occupant. Bodies were piled on street corners or thrown into the river until it swelled with its grisly load. In one instance, 21 orphans and the 13 Red Cross workers who were trying to guard them were murdered. It was a world gone mad, ferocious in its hatred and violence, and before it was finished over half a million Rwandans would be dead and another 2.2 million would have fled the country. 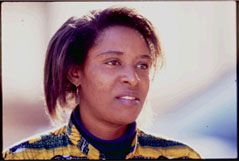 Immaculee, whose husband was a soldier and an airplane mechanic away on duty, spoke of that first, shocking night in April. “At camp, I heard the guns and bombs crying all around me.” She shivered in terror and thought of her daughter, Aloysia, who was a Hutu but had the lankier build of a Tutsi. This meant she was in grave danger. As Immaculee huddled with other military wives in the compound, however, she had something they didn’t. For a long time she had had the uncommon practice in her country of being a Bible reader. In these moments of horror, she did what came naturally–she prayed. “Our Heavenly Father, please help me in this situation. I put my husband and my daughter in your hands. I don’t know what’s going on, but please protect me.” Despite the explosions around her, after the prayer she had peace, and to the amazement of the other women, Immaculee slept that night.

For three days the military wives were moved from one bomb shelter to another while Immaculee continued to pray and frantically seek transportation into the city to find her daughter. At last, the military commander granted her an armored car and a driver. It was a haunting scene Immaculee beheld as they drove into town. The stench of decay was everywhere. Remnants of death littered every street. Yet they found Aloysia alive. Three times she had remarkably escaped being murdered. A merciless gang of Hutu thugs had pointed a gun in her ear, shot it, and it misfired. A second time, a murderous group hunting for blood had been paid off by the family she was staying with. Finally, a third time, her tall frame was pulled out into the street while she screamed that she was not a Tutsi and she somehow was finally able to escape out of her enemy’s grasp and run away.

Two scriptures sustained Immaculee during the nightmare of the next days, as she and her daughter joined the ragged file of refugees who clutched a few scant belongings in plastic bags and escaped the country. All she had known of her life was lost, replaced by a nightmare of hellish proportions. They were without food or water or place to lay their heads except along the banks at the roadside where they might just as easily be mistaken for the dead while they slept. But this scripture from Isaiah sustained her: “For the mountains shall depart, and the hills be removed; but my kindness shall not depart from thee, neither shall the covenant of my peace be removed, saith the Lord that hath mercy on thee” (Isaiah 54:10). In the chaos that had become her world, she still had this to cling to.

She wondered too about the covenant to which God referred in Ezekiel 16: “Nevertheless I will remember my covenant with thee in the days of thy youth, and I will establish unto thee an everlasting covenant.” Where was this covenant?

Tossed from one refugee camp to another, Immaculee found no peace. Added to the violent hatred of the soldiers which was bred as surely in the camps as in the killing fields of Rwanda was an even more dreaded enemy–disease. The water, thick as soup, was filled with waste, and consequently cholera drained people of their bodily fluids and left them corpses in twenty-four hours. One woman with whom she lived lost three children in one day.

During the next three years Immaculee moved from Zaire to Swaziland and last to South Africa. She had become a woman without a country and nearly without an identity. The blank, lost hopelessness was intensifed when she finally got word that her husband had been killed while on duty in Zaire. Now Aloysia, too, was gone. For her own good, she had left her in Swaziland with a family who could care for her. Immaculee found herself alone in a room in Johannesburg, South Africa, tended to by others only because they felt some compassion for her.

Doctors could never explain the reason for what happened next. Perhaps it was that her fragile system had taken all the horror it could bear. or because the gnawing worry about the well-being of her husband and relatives had eaten at her nerves, but her limbs began to freeze up. Slowly her arms and legs stopped responding to messages from her nervous system. She could no longer walk, and her hands became paralyzed like claws.

“My kindness shall not depart from thee.” “I will remember my covenant with thee.” Sometimes she could remember these words, and they sustained her. Sometimes in her despair she forgot them.

Then, at last, living in a single room over a store front in Port Elizabeth, South Africa, she received a copy of the Book of Mormon from a friend. It caught her eye because it was another testament of Jesus Christ whom she already loved. After several weeks, she began to wonder, couldn’t someone help her get in touch with the people who knew about this gospel? A friend tried to call the local LDS church for her, but they got no answer. She was ready to give up, when another friend from Burundi saw her book and said, “I know these people. I will get their missionaries for you.”

When Immaculee learned about covenants, she cried; when she learned that Heavenly Father had broken the silence of centuries in the First Vision by calling Joseph by name, she was pierced to the heart. Here was a God who knew his name and must then surely know hers. After all the years of being lost and tossed about, after unimaginable pain and heartache, she felt that she had at last been remembered.

Immaculee Twagiramungu, survivor of the Hutu-Tusi civil war, was baptized a member of the Church of Jesus Christ of Latter-day Saints in June 1998. Her daughter, Aloysia joined the Church in January 1999.