“It’s a bold step we are taking. But this boldness is in harmony with the tremendous outreach of the Church across the world.” President Gordon B. Hinckley

Even with word spreading quickly across the country, those interested in the restored gospel fit neatly into Peter and Mary Whitmer’s 20 by 30 foot, roughly-made cabin on that April 6, 1830 when the Church was first organized. What a contrast to the bold, new conference center that is so vast, hiking across it leaves you out of breath. It is huge.

From the outside its mammoth granite walls are overpowering, and even still, the inside is surprising in its scope. It is not just that a Boeing 747 would fit inside with room to spare or that enough concrete was used to build a column 66 miles high. It is that it is a symbol of the urgency and power with which the gospel is sweeping the earth. The Tabernacle can’t contain us. Even the Conference Center can’t contain us. From this place, the message literally goes to all the world through satellite and Internet. 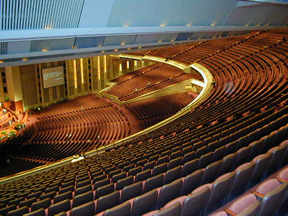 Enormous great hall of the conference center with three levels of seating.

The Church was bombarded with well over 370,000 requests for tickets for this 170th General Conference. Most had to be turned away, and the Friday before conference started, the line at “will call” for tickets looked like Isaiah’s description of Lord’s house in the top of the mountains-“all nations shall flow unto it.” A man in a Scottish kilt, waited in line by a woman from El Salvador. A man from Ghana stood with his daughter who had moved to Boise. All were standing in line at least a half-hour to pick up their pre-ordered tickets.

Intense traffic challenges marked this conference weekend with as many as 150,000 people coming and going during the two-day period, nearly doubling the population of Salt Lake City for the weekend. The Church anticipated the problem, encouraging car pools and negotiating with TRAX to run on Sunday. Even the staff at the Public Affairs department was beefed up to ready for the event.

The Purposes of God Shall Be Accomplished
Joseph Smith was bold. We think of him, in the beginning. as an uneducated farm lad-one of the small things of the earth. But even as a fourteen-year-old walking into a grove with a burning question, he was still the mighty head of the dispensation of the fullness of times. He was only disguised to himself and the world as an untutored youth.

We can hear Joseph’s boldness in his famous assertion to John Wentworth, editor of The Chicago Democrat. “No unhallowed hand can stop the work from progressing; persecutions may rage, mobs may combine, armies may assemble, calumny may defame, but the truth of God will go forth boldly, nobly, and independent, till it has penetrated every continent, visited every clime, swept every country, and sounded in every ear, till the purposes of God shall be accomplished, and the Great Jehovah shall say, the work is done.” It seems that nothing about this massive new Conference Center and the need to build it would have surprised Joseph. 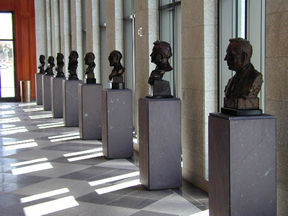 Hall of the Prophets of the Lord in the Dispensation of the Fullness of Times.

Gordon B. Hinckley is of the same stamp. His vision of this expanding work is always astonishing. His native optimism becomes tangible as temples spring up, press attention mounts for the Church, and a new Conference Center is born.

The reason for this happy, reverent boldness is clear. God is in his heavens. Christ performed the mighty atonement. The gospel is not only the good news, but the best news, the glorious news.

At the ground breaking ceremony for the new center, it was all about Heavenly Father and his Son, Jesus Christ. “His name will be spoken frequently within this hall. His name will be worshiped, as will the name of his beloved son, our Savior and our Redeemer. And the voices which speak in this hall, this enlarged hall, will be carried across the world to the nations of the earth as this Church rolls on and continues to grow from its present membership of 10 million scattered in more than 160 nations to numbers beyond our ability to calculate and to places beyond our ability to guess at this time.

“It will be built as well as we know how to build in this season of the history of the world and I hope that it will stand for as long as the earth lasts and serve the purpose of the Kingdom of God.”

The Urgency
A rush has been on to ready the Conference Center for this 170th General Conference. From October to April, with crews working around the clock six days a week, the empty shell of a building has been transformed. Twenty-one thousand burgundy upholstered seats on three major levels are ready to be filled. A hall of busts of prophet’s is nearly complete. Gold organ pipes flanked with dark wood rise behind the podium.

Still, the hurry has not stopped. The theater which seats 900 will not be ready until later and the dedication will not happen until next October. Those organ pipes will not sound this conference. Worrying about what to do about musical accompaniment has been one of hundreds of concerns besetting the building process. At first, discussion centered on piping sound over from the tabernacle organ. Finally, it was concluded to bring in another electronic organ. The Mormon Tabernacle Choir practiced only briefly in the Conference Center before their debut there. 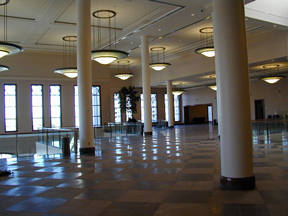 As the hours before conference drew closer, the work was not finished. Three women were cleaning a large picture window. Another was vacuuming. A crew in a corner were painting a wall. Statues and artwork needed dusting. The sound system and fire alarms were tested and tried. Hundreds were cleaning up-all in anticipation.

“It’s been a push,” quipped one of the workers. “And you can quote me on that.”

The push is about something more than getting a building done. Those who streamed into the awesome Conference Center this weekend surely felt that.

The truth of God will go forth boldly, nobly, and independent till it has penetrated every continent, visited every clime, swept every country, and sounded in every ear.

The Tabernacle and Conference Center
A Side-by-Side Comparison 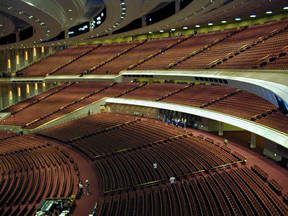 The expanse of seating from which Saints will hear their Prophet speak.