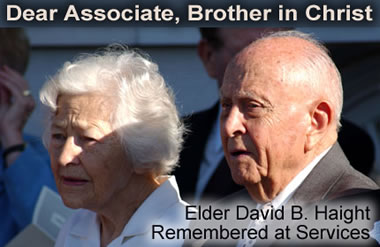 David B. Haight, 97, the oldest man to serve in the apostleship in this dispensation, was remembered Thursday at his funeral services as a warm and caring man with a testimony that influenced thousands upon thousands.

It was the second time in two weeks a member of the Quorum of the Twelve was eulogized.  Elder Neal A. Maxwell died earlier in July.  As the Twelve sat in their order, two side-by-side seats were vacant on the stand and President James L. Faust lamented, “To lose them both within 10 days is a great personal loss as I sat between them for 14 years.  I wonder if Elder Maxwell was having a hard time without his old seatmate.”

Speakers at the funeral included all the members of the First Presidency, President Boyd K. Packer, acting president of the Quorum of the Twelve, son Robert Haight and son-in-law Jon M Huntsman, Sr.

President Gordon B. Hinckley said that Elder Haight’s death, “has left me with a deep and somber feeling of loneliness.  He was the oldest among us and I felt I had an older brother to whom I could look.”

Yet President Hinckley hadn’t lost his vintage sense of humor.  He looked out at the steaming congregation in the hall where the temperature was sweltering and quipped, “I know it’s warm in the Tabernacle, I’d like to suggest to the keeper of heavenly invitations that there be a deferment to a cooler season.”

Elder Haight was born and reared in Oakley, Idaho, and President Faust said, “Most of us have never been to Oakley, Idaho.  He spoke of it as if it were the center of the universe.”  President Faust said that the Brethren loved to hear his childhood memories—about the times, for instance, when he swam in the canal in his bib overalls with the pockets cut out so he wouldn’t drown with the heaviness of the water.

It was on one such occasion, according to President Packer, on David’s eighth birthday, as he swam in the canal, that his father, who was bishop, came out of the church with a chair.  He climbed into the canal, baptized David, and then they came out of the water together, David sat on the chair and his father confirmed him.  A year and a half later his father died.  With a widowed mother, David learned early the lessons of hard work and began to discover his great strengths with people.

President Faust told about the famous story where Oakley High took on Twin Falls High in football.  David was on the Oakley team which ended up getting trounced, losing 6 to 106.  Twin Falls made a touchdown every time they got the ball.  “We kicked it to get rid of it,” Elder Haight joked.  Near the end of the game, Twin Falls got reckless and threw a pass which an Oakley High boy intercepted.  He ran not for points but for his life and he made the only touchdown.

President Faust said, “David Haight was never again on a losing team.”  He was intelligent and enterprising, warm and caring.

During World War II, he was given a direct commission as a lieutenant to help expedite the supplies in the Pacific.  His job was to cut through the red tape and help win the war.

Before he went to war, according to his son, Robert, he spent the night in prayer, committing to his Heavenly Father his service in the kingdom if he could be spared to be with his beloved Ruby and the family.  He promised that he would never turn down a calling in the kingdom.

After the war, David Haight became a successful businessman with great influence.  He served as a stake president and mayor of Palo Alto, California, a position he resigned to become president of the Scottish mission before being called as a General Authority.

President Faust said, “Thousands and thousands of lives have been directly touched by this unique, caring man…He was uncompromising in doing what was right and encouraging others to do the same.”

His was particularly a ministry of kindness and outreach as a disciple of Christ. President Faust said, “He would read in the paper or hear of a total stranger who had a misfortune and he would reach out to them.”

President Monson shared a personal memory of a scene featuring David B. Haight.  They attended a mortuary viewing together of a very prominent person who had passed away.  Many were in attendance and the line was long.  After they made their greetings, “I saw him cross the hall and go to a viewing where there were but few.”  He introduced himself to the widow, “Hello, I’m David Haight of the Quorum of the Twelve.  I came to extend my condolences and my sincere prayer in your bereavement.”

“He’d never before met her, but he brought peace to her soul,” said President Monson.

Robert Haight remembered a similar story of outreach. In November of 1999, his parents traveled to British Columbia where he and his wife were serving on a church assignment. A meeting had been arranged for Elder Haight to address the Saints.

“Dad wasn’t feeling very well, so we told him to make it short so we could get him home to bed.”  That didn’t happen.  After almost an hour at the pulpit, he was exhausted.

“We told him we could slip him out the side door and to bed,” said Robert Haight, but his father replied, “When you are out among the people, do all the good that you can do.  Some of these people might never have the opportunity to shake the hand of an apostle.”

That night he shook hands for over an hour.  Last in the line was a young man of about 30 years old whom the missionaries had been teaching.  He said, “This night has changed my life forever.  Thank you for staying to shake my hand.”

Jon Huntsman Sr. remembered his father-in-law for his kindness, graciousness, courtesy and love.  “Hard work and sacrifice were but a by product of all he did,” said Brother Huntsman.

“His outgoing and warm personality put everybody at ease…He was trusted by all….  His popularity and integrity were his trademarks.”

Jon Huntsman also noted that when he was dating his wife-to-be Ruby, while others his age borrowed automobiles for dates, David had to go on street cars.  This September 4 would have been their 74th anniversary.  It is another record among those who have served in the Twelve—the longest number of years of marriage.

“He loved all men.  He accepted all people. To the less than active he gave encouragement and acceptance… His kind heart embraced all of God’s children… He focused on one’s strengths and abilities… He left people with hope and inspiration.”

Brother Huntsman said, “He never criticized,” and noted that Elder Haight once told a crowd, “I am still waiting for my son-in-law to amount to something.”

Jon Huntsman and one of his sons visited Elder Maxwell just before he died to tell him goodbye.  Elder Maxwell told them he would rather be in the starting lineup on the other side than sitting here to which Elder Haight replied, “So would I.”

President Hinckley told of a remarkable experience he had with Elder Haight.  On the night of January 16, 1989, President Hinckley was just returning from a conference in Portland, Oregon when he got a call from the emergency room at the LDS Hospital.

Elder Haight had been brought in unconscious and in serious trouble.  President Hinckley gave him a blessing.  He said, “I do not remember all that I said, but I do remember that I felt impressed to tell him that his life would be spared, that he had work yet to do.”

The doctors diagnosed a very serious aortic aneurism and he had surgery.  Almost a month later when President Hinckley visited him in the hospital, his condition was still very serious.  Later that spring he spoke to the Twelve at their regular meeting in the temple and shared a profound experience.

Said he, “I am here as a result of your faith and prayers in my behalf and the blessing of the Lord.  I am grateful for the blessing I received from President Hinckley.”  He had pleaded with our Heavenly Father, that if it be his will, his life would be spared, that he might continue his ministry.

When he had heard the ambulance in the distance, he lost consciousness and remained unconscious for several days.  At that time he entered into a holy presence or atmosphere where he was shown a panoramic view of Christ’s earthly ministry.  He saw the scenes of John the Baptist, the baptism of Christ, his teaching, his healing the sick and the lame.  The scene was clear for him as the Savior washed the feet of the apostles and broke and blessed the loaf of dark bread at the Last Supper.  He saw the trial of the Lord, the beating by the soldiers, the nails being driven into his hands and feet.  He had marvelous manifestations of the Prophet Joseph Smith and of Moroni.

“This filled my soul during my time of unconsciousness,” he told the Twelve, with “things that I cannot express.”

Elder Haight felt keenly the responsibility to bear testimony of the mission of the Savior. “I love this work.  It is true,” he said.  “God is our father.  He loves us.”

“That occurred 15 years ago,” said President Hinckley.  How wonderful his work has been during those 15 years…He has traveled widely over the earth.  He has borne his witness that has touched all those who have heard him.”

Now, he’s on the first string on the other side. “Precious in the sight of the Lord is the death of his Saints,” said President Packer.