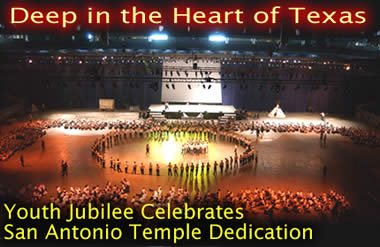 They do everything big in Texas—even Church events.  When President Hinckley said that he wanted the youth to celebrate and mark deep into their memories the dedication of the San Antonio temple, the Texas Saints responded in Texas style with a youth jubilee of singing and dancing that was massively entertaining. 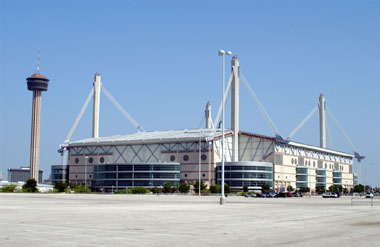 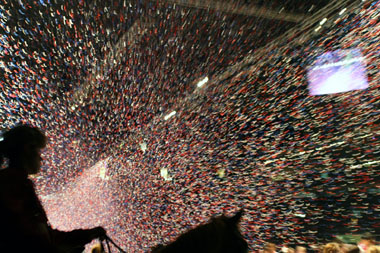 Put it all together and you have “Deep in the Heart of Texas,” the May 21 Saturday night celebration that took place before the temple dedication on Sunday.

The theme was family, faith and freedom with a Texas spin. “We call it FAMILY, FAITH AND FREEDOM,” joked one, since everything was created on such grand scale. 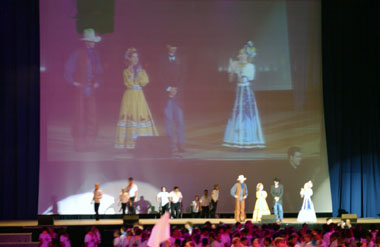 The script, created by Saturday’s Warrior veteran writer Doug Stewart, revolved around an ageless Texas family whose members each narrate a section of the story.  The father, who rode into the Alamodone in a Stetson on a horse, represented the history of Texas. 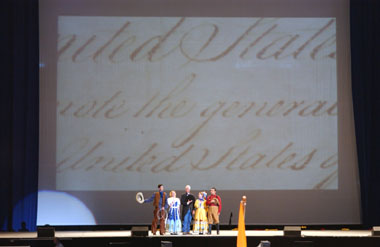 The mother, the yellow Rose of Texas, was a symbol of family.  They had a patriotic son and a pioneer son, and a daughter who each narrated a portion of the program.

On cue, from four corners of the hall, thousands of youth ran onto the floor to dance and sing each number, while the 25,000 audience members often joined along. 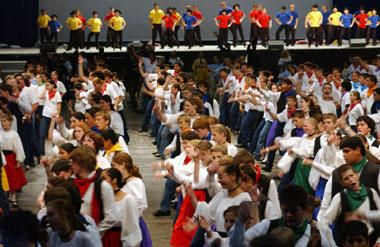 Behind the stage on a giant screen, video clips and photography complemented the scene.  The symbol of the event was a drawing of the angel Moroni atop the Alamo.

In successive numbers the youth danced to songs that ranged from a waltz to country ballads to the Mormon Tabernacle Choir singing “Come, Come Ye Saints” as the show took in a broad sweep of Texas culture and history. 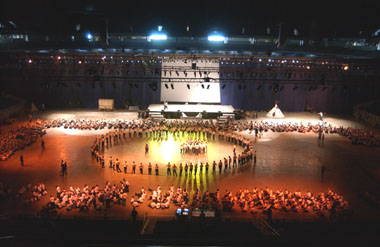 A flowing river of Primary children moved round the floor with green light sticks (which some couldn’t resist tossing in the air) to “I am a Child of God.”  A giant, undulating rectangle of youth waltzed to the strains of “I could waltz across Texas with you.”

The Guinness Book of World Records missed an opportunity for what may be the biggest line dance in history as half a football stadium of youth danced to “Cotton-eyed Joe,” swinging arms in the hair and turning. 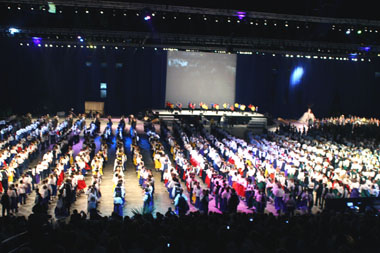 The patriotic son said to his brother, “I’m just like every other Texan, I know the price of freedom,” as the military songs including the Marines’ Hymn and Anchor’s Aweigh  sounded across the dome and youth in uniforms of all kinds drilled around an American flag.

The patriotic son said to his brother, “I’m just like every other Texan, I know the price of freedom,” as the military songs including the Marines’ Hymn and Anchor’s Aweigh  sounded across the dome and youth in uniforms of all kinds drilled around an American flag. 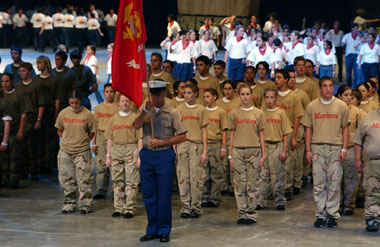 There were fireworks, confetti and flags—not a single trick of showmanship lost or heart string left unpulled.