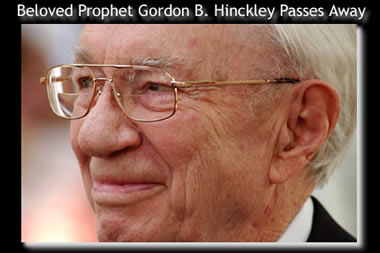 By Maurine Proctor with information from the LDS Newsroom

Our beloved President Gordon B. Hinckley, who led The Church of Jesus Christ of Latter-day Saints through twelve years of global expansion, has died Sunday evening at his apartment in downtown Salt Lake at 7:00 p.m. at the age of 97 of causes incident to age. Members of his family were at his bedside.

A successor is not expected to be formally chosen by the Church’s Quorum of the Twelve Apostles until after President Hinckley’s funeral within the next few days.

He has been one of the most loved modern Church leaders and is the greatest temple builder in the history of the world. Of the 124 temples in the Church, President Hinckley has dedicated 85 of them and rededicated 10 more. It was planned that he would be dedicating the Rexburg, Idaho Temple this coming weekend on February 3.

In calling for 100 temples to be in operation before the end of the year 2000, the Church president committed the Church to a massive temple-building program.

It took the Church 167 years to dedicate the first 50 temples. Under President Hinckley, it took forty months, to the day, to dedicate the next 50 temples. His great desire was to make temples available close to members all over the world. This was accomplished in part by his inspiration for a smaller architectural plan that made them much more affordable.

A moment that will particularly mark his tenure and brought audible gasps from the audience was the April 4, 1999 announcement that the Nauvoo temple would be rebuilt. This temple had been completed even as wagons were being built for the Saints to abandon their homes in Nauvoo under mob pressure and became both a symbol of loss and then restoration to Church members.

His warmth, drive and vision, despite his age, have so captivated Church members that one observed at his passing, “We’ve all come to the point we thought he would love forever.” His tirelessness made him seem to us eternally young.

With the wit that endeared him to us, he often made quips about his age. He said even though he was supposed to be in his golden years, there was a lot of lead in them. He teased that he used to drive the work forward with a 2×4, but now it was with a cane. He often said he was like the last leaf on the tree, and there was a stiff wind.

Nevertheless, his energy astounded us. He always put in a full day at the office and to celebrate his 95th birthday, he made an announcement that surely no other 95-year-old has done—that he would make a round-the-world, 25,000-mile, seven-nation tour to visit members in Russia, South Korea, China, Taiwan, India, Kenya, and Nigeria.

At his first press conference reporters asked him, “What will be your focus? What will be the theme of your administration?”

He answered, “Carry on. Yes. Our theme will be to carry on the great work which has been furthered by our predecessors.

“We have every reason to be optimistic in this world,” President Hinckley insisted. “Tragedy is around, yes, Problems everywhere, yes. But look at Nauvoo. Look at what they built here in seven years and then left. But what did they do? Did they lie down and die? No! They went to work! They moved halfway across this continent and turned the soil of a desert and made it blossom as the rose. On that foundation this church has grown into a great worldwide organization affecting for good the lives of people in more than 140 nations. You can’t, you don’t, build out of pessimism or cynicism. You look with optimism, work with faith, and things happen!”

That optimism drove him as he called on Church members to “stand for something” or “stand a little taller.”

A favorite story from his mission is a measure of the man. While he was on his mission living in a very ordinary neighborhood at 15 Wadham Place in Preston, England, he wrote home saying that he was wasting his time and his parents’ money.

His father wrote back, “Dear Gordon, I have your letter…I have only one suggestion: Forget yourself and go to work.”

Then, President Hinckley said, “I got on my knees in that little bedroom…and made a pledge that I would try to give myself unto the Lord.

“The whole world changed. The fog lifted. The sun began to shine in my life…Everything that has happened to me since, that’s been good, I can trace to that decision made in that little house.”

President Hinckley felt a deep connection to the history of the Church. He built temples in Palmyra and Winter Quarters and had key Church history sites restored to their original look. He dedicated many new buildings and a new visitors’ center in Kirtland. He renovated the Tabernacle on Temple Square to protect it from earthquake damage.

With an eye to the future, he constructed the Conference Center which seats 21,000 as a new gathering place for general church meetings, a place in the top of the mountains, where “all nations shall flow unto it.”

It is believed to be the largest religious and theater auditorium in the world and has become the hub for the Church’s general conference messages to the world, broadcast in 54 languages.

An eloquent spokesman for the Church, he made friends with the media and became a popular interview subject quoted widely. He won the respect of 60 Minutes tough Mike Wallace and appeared on CNN’s Larry King Live a number of times.

During the Salt Lake Olympics of 2002, his request that the Church refrain from proselytizing visitors was credited by media with generating much of the goodwill that flowed to the Church from the international event.

At a general conference of Church members in April 2001, President Hinckley initiated the Perpetual Education Fund — an ambitious program to help young members of the Church (mainly returning missionaries from developing countries) receive higher education and work-related training that they would otherwise likely never receive.
Even before his term as president, President Hinckley’s extensive Church service included 14 years as a counselor in the First Presidency, the highest presiding body in the government of the Church, and 20 years before that as a member of the Quorum of the Twelve Apostles.

President Hinckley was born 23 June 1910 in Salt Lake City, a son of Bryant Stringham and Ada Bitner Hinckley. One of his forebears, Stephen Hopkins, came to America on the Mayflower. Another, Thomas Hinckley, served as governor of the Plymouth Colony from 1680 to 1692.

President Hinckley’s first job was as a newspaper carrier for the Deseret News, a Salt Lake City daily. After attending public schools in Salt Lake City, he earned a Bachelor of Arts degree at the University of Utah and then served two years as a full-time missionary for the Church in Great Britain. He served with distinction and ultimately was appointed as an assistant to the Church apostle who presided over all the European missions.

Upon successfully completing his missionary service in the mid-1930s, he was asked by Heber J. Grant, then president of the Church, to organize what has become the Church’s Public Affairs Department.

President Hinckley began serving as a member of the Sunday School general board in 1937, two years after returning home from missionary service in Great Britain. For 20 years he directed all Church public communications. In 1951 he was named executive secretary of the General Missionary Committee, managing the entire missionary program of the Church, and served in this capacity for seven years.

On 6 April 1958, while serving as president of the East Millcreek Stake in Salt Lake City (a stake is similar to a diocese), President Hinckley was appointed as a general authority, or senior full-time leader of the Church. In this capacity he served as an assistant to the Quorum of the Twelve Apostles before being appointed to the Quorum of the Twelve Apostles on 5 October 1961.

President Hinckley was awarded the Silver Buffalo Award by the Boy Scouts of America; was honored by the National Conference for Community and Justice (formerly the National Conference of Christians and Jews) for his contributions to tolerance and understanding in the world; and received the Distinguished Service Award from the National Association for the Advancement of Colored People. On June 23, 2004, President Hinckley was also awarded the Presidential Medal of Freedom by President George W. Bush in the White House.

President Hinckley wrote and edited several books and numerous manuals, pamphlets and scripts, including a best-selling book, Standing for Something, aimed at a general audience. In it he championed the virtues of love, honesty, morality, civility, learning, forgiveness, mercy, thrift and industry, gratitude, optimism and faith. He also testified of what he called the “guardians of virtue,” namely traditional marriage and family.

President Hinckley married Majorie Pay in the Salt Lake Temple in 1937. They have five children, 25 grandchildren and 38 great-grandchildren. Sister Hinckley passed away 6 April 2004.