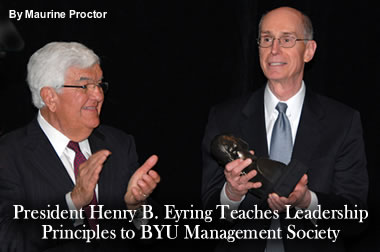 President Henry B. Eyring of the First Presidency was awarded the Distinguished Public Service Award from the Washington D.C. Chapter of the BYU Management Society last weekend at a dinner held in his honor and used the opportunity to teach about principles of leadership and leading.

“I’ve spent most of my life observing leaders and trying to be one,” he told a capacity crowd at the Marriott Hotel.

“I have searched for years for an answer to the question, “Why do people decide to follow a leader?” My guess is that you have pondered that question in the variety of settings in which you have lived and worked. You are likely still searching for a final answer and so am I.

“However, I thought it might be helpful to you if told you where I am in my search for an answer and how I got there. That might help you in your own search. I have tried to understand why great leaders get people to follow them. My explanation is getting down to two words: Trust and Integrity.

“It seems to me that people follow leaders they trust and the main source of their trust is the integrity they sense in the leader. Even more than competence, they will trust character. They trust people they think will find the course to follow by searching for what is the right thing to do without fear or selfish motive. And then that they do it themselves and ask their followers to come with them.” 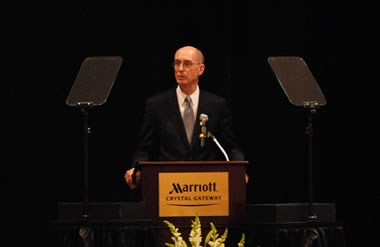 He said that people trust integrity even more than competence.

President Eyring told a story that he said demonstrated “ how some ordinary people in a climate of trust and deeply rooted integrity became powerful leaders all over an organization” and “shows that many great leaders can appear when you need them if selfless integrity has become the norm.”

On June 7, 1976, President Eyring, who was then the president of Ricks College, was in Idaho Falls at the temple wedding of a faculty member and miles away from his leadership post. As he and his wife, Kathleen, left the temple, a woman at the desk whispered to them that the Teton Dam had broken and a wall of water was headed for Rexburg.

In addition to the many for whom he was responsible at the college, four of his young sons were there as well. Two of them were working on a farm near where the dam had broken, and two more were at home with a baby sitter, he knew would probably not be aware that a flood was coming.

They quickly tried to return to Rexburg to help, but the police stopped them and told them all roads were closed. They were forced to spend the night in a motel, not knowing what had happened to their children or the college.

“As I look back, said President Eyring, I realize that I slept well that night because I knew something about the people for whom I was responsible. I trusted them for their integrity. I knew that they would try to find out what was right to do and that they would try to do it whatever the cost. I was sure that the people would follow them. That was deep in the natures of the people there long before I arrived as the young president. The people were rooted in moral principle from administrators down to the humblest workman.”

The next day, he said, “We arrived at the college to find thousands of survivors wearing all the clothes they had left. More Latter-day Saints were driven from their homes than at any other time in the history of the Church.”

He was told that his sons were safe. The water did hit the college, but it didn’t hit the house. The two who had been plowing near the dam and been so close they saw the water rushing. The boys had asked the farmer, Craig Moore, “Shouldn’t we head for home?” He had thought for a moment and said, “No. We agreed this morning that we would finish the plowing today. We always keep our word. We always finish what we start.”

The boys had said, “Yes, sir,” and climbed back up on the tractor. Brother Moore had no way of knowing whether the flood would hit his house where his wife was alone. But the boys knew from experience with Brother Moore that he would have asked a prayer about what to do. He didn’t need to tell them that he had offered a prayer and felt that all was well at home. “They trusted him,” said President Eyring. “They stayed at the farm because they trusted that he would know what was right to do and do it whatever the cost.”

“At the college, I found that our people across campus had demonstrated that same great moral leadership and that people had followed them. Their president was in Idaho Falls. Yet ordinary people decided what the right thing to do was. They did it. And others followed them.”

The food service had fed over 5,000 dinners to survivors the first night. President Eyring said that he had for months told the man in charge of food service to hold down his food inventories to save costs, but he always felt better when he had reserves for surprises, an ideal certainly ingrained in him from his Mormon background.

Equally ingrained in him was the Mormon value of working long and hard. Even though it was Saturday, and he wasn’t required to be there, he was there. He called in the bakers, the cooks, the dishwashers, all of whose own homes were in danger, and they came.

President Eyring smiled, “I got the credit for this in some of the press reports, but I wasn’t even there.” What people were responding to he said, was a climate of integrity and trust. If he deserved any credit he said, it was that “I had recognized what my predecessors had created and I tried to protect it.”

The campus housing manager had acted just as the food manager. He decided what the right thing to do was, called in his workers to help, and because of them hundreds of families slept on clean sheets that night. “ Ordinary people in trouble themselves had followed the leadership of ordinary people they trusted to know the right thing to do. And so they all did it. The integrity of the followers rose to the integrity of their leaders.” President Eyring said.

Before President Eyring arrived from Idaho Falls, the manager of the student center had called the local stake president, and on his own had set up an emergency command center on campus.

“When I finally got back on the job in Rexburg, I went to the room in the student center where President Ricks was holding his meeting. I saw the bishops and the high councilors sitting there in whatever clothes they had been wearing when the flood hit.

Most of them showed signs that they had been out in the mud and among the broken trees to find and help their people.

“Now, some of our critics might say they only followed the stake president out of submission to authority. But you wouldn’t believe that if you knew those bishops. They were farmers and mechanics as independent as any you will ever meet. And that was equally true of their followers who answered the call…

“They didn’t do that because they respected the office of the bishop.

That surely was a part of it, but respect alone wouldn’t explain it. They trusted the bishop because of his character. They knew he would have prayed to know what ought to be done, that he would to it, and that he would tell them as honestly as he could what he felt God wanted them to do.”

After a few days an experienced director from the National Disaster Relief Agency arrived with a professional team. President Eyring met him as he arrived to speak with

Stake President Ricks and several bishops. As the director moved down a check list of what should be done, President Ricks quietly whispered, “We’ve already done that.” After this had continued for four or five minutes, he said he would just like to observe, and by the next day he was asking “What would you like us to do?”

“It was the President of the United States calling from Air Force One. He had called to thank the Church for the excellent response of our people to a disaster in Florida. I was told afterward that he attributed it to our organizational skills as a Church.

It was far more than knowing how to organize. It was people with integrity deep inside them that produced the miracle. The gospel had gone down into hearts to produce the climate in which trust and great leadership could emerge.”

President Eyring continued, “ This idea that great leadership springs out of a climate of people rooted in moral integrity is not original with me. Nor does it only work among Mormons or in disaster relief. It is true in every endeavor.

“Here is one of my favorite passages in the United States Army Leadership Field Manual. It argues that we need great leaders who can be trusted for their integrity. Here is a passage: ‘People of integrity do the right thing not because it’s convenient or because they have no choice.

“’They choose the right thing because their character permits no less. Conducting yourself with integrity has three parts: Separating what’s right from what’s wrong. Always acting according to what you know to be right even at personal cost. Saying openly that you’re acting on your understanding of right versus wrong.’”

President Eyring said, “Integrity will not only gain trust from your subordinates in the crisis of floods or in combat. It will gain trust from superiors and subordinates in any setting. I like these lines from the book, The Moral Sense, by James Q. Wilson which is a compliment to us with a bit of an edge: ‘We value people who are so inner directed that we can rely on them acting in a certain way.’

“And then a few lines later, ‘People will often defer to our wishes if they think we will make a scene when we are asked to act contrary to a deeply held conviction, and they will often have confidence in our promises if the promises are consistent with our principles even when they know we will encounter many temptations to break the promise.”

President Eyring concluded, Do you remember the old line from our hymn, ‘Choose the Right’? There is a line in it: “There’s a right and a wrong to every question.”

“We can influence the emergence of great leaders rooted in moral principle. And they will lift families who in turn can lift our society. You can help create those trusted leaders. We desperately need them.”