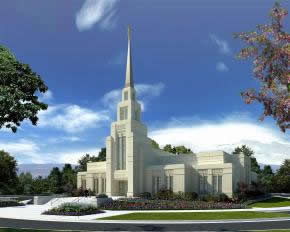 The First Presidency of The Church of Jesus Christ of Latter-day Saints has announced a public open house prior to the dedication of The Gila Valley Arizona Temple.

The public will be invited to visit the temple beginning on Friday, 23 April 2010, and continuing through Saturday, 15 May 2010, excluding Sundays.
After the open house, the temple will be formally dedicated on Sunday, 23 May 2010. Three dedicatory sessions will be held to accommodate Latter-day Saints in the area served by the temple. This includes some 20,000 Latter-day Saints living in stakes in southeast Arizona and southwest New Mexico.

In conjunction with the temple dedication, there will also be a cultural celebration of music and dance throughout the region. This event is scheduled for Saturday, 22 May 2010 at Mickelson Stadium at Eastern Arizona College.

Latter-day Saint temples differ from the Church’s meetinghouses or chapels where members meet for Sunday worship services. Temples are considered “houses of the Lord” where Christ’s teachings are reaffirmed through marriage, baptism and other ordinances that unite families for eternity. In the temple, Church members learn more about the purpose of life and strengthen their commitment to follow and serve Jesus Christ and their fellow man.

The Gila Valley Arizona Temple was first announced on 26 April 2008. It will be the 132nd operating temple in the world, and the third in Arizona. This temple follows closely behind the Vancouver British Columbia Temple (131), which is scheduled for dedication on 2 May 2010.  Other temples have been announced for Gilbert and Phoenix, Arizona.