Visitors will step into history upon entering the newly completed Mormon Battalion Historic Site in San Diego, which opened to the public on 30 January. Formerly known as the Mormon Battalion Visitors’ Center, this new exhibit, operated by The Church of Jesus Christ of Latter-day Saints, has received not only a major facelift but a new name and many technological additions to give visitors, young and old, a chance to experience hands-on a little of Battalion life. 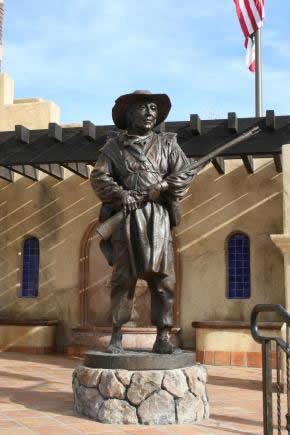 The new Mormon Battalion facility is not just about great technology, says Elder Richard G. Hinckley of the First Quorum of the Seventy. “Technology helps us tell the story. We need to make the Mormon Battalion story felt by the people that come through here. This Mormon Battalion was mustered into service as the only unit ever in the history of the United States based solely on religious affiliation.”

Several characteristics mark what these Mormon Battalion members were made of, explains Mark Lusvardi of the Church’s Missionary Department. “They are faith, service, citizenship and sacrifice. These were ordinary people who did extraordinary things because of their faith in the Lord Jesus Christ.”

About 500 men enlisted in the Mormon Battalion, and about 80 women and children traveled with them. They began their journey in the sweltering heat of Council Bluffs, Iowa, on 20 July 1846, leaving their loved ones behind. The battalion completed one of the longest infantry marches in American history-about 2,000 miles (3,220 km) through what are now seven states and into Mexico.

As visitors enter the front door at 2510 Juan Street in San Diego, they will “find themselves in period architecture, Spanish and Californio,” says Kathy Marler, a local Church representative. “The entry is marked with a statue of a Mormon Battalion soldier. The lobby is designed to feel like an outside plaza.”

Visitors will learn many interesting things about the Mormon Battalion, says Lusvardi. “They will find out about the major contributions by the pioneer Latter-day Saints in the settling of the West. They were instrumental in building part of the transportation corridor from San Diego to Salt Lake City where Interstate 15 now runs. In 1847 San Diego’s first courthouse was built by members of the Mormon Battalion from bricks they had fired.”

Visitors are greeted by enthusiastic volunteer tour guides dressed in period clothing. A guide leads visitors to a series of framed pictures on the wall where the guide engages in conversation with the people in the pictures, who are brought to life, as it were, by digital technology. The characters converse with the guide and with people in another framed picture in relating the story of the Mormon Battalion. One of the digital characters walks out of the picture on the wall into the next area, where the guide escorts the visitors into the Encampment Room. Tents are set up and visitors sit among them on logs listening to more of the story from the characters on three big screens. Two additional rooms depict Fort Leavenworth, Kansas, one of the stops on the battalion’s march west, and the Old Courthouse in San Diego.

Visitors can enjoy panning for gold, making bricks, wearing replica period clothing and seeing authentic artifacts. Among the historical treasures are muskets, a gold pouch, baskets, actual bricks from the foundation of the Old Town courthouse, and a cannon that the battalion rolled across the United States.

Visitors can have their pictures taken digitally and either take the finished print with them as they leave or have them emailed. The Research Room provides access to battalion members’ family history to see if visitors might be related to them.