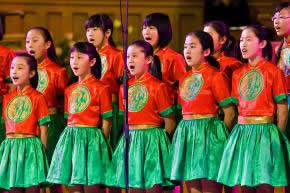 A choir of 350 children from several different faiths, including some performing in American Sign Language, sang together. The event also featured reading from holy books, dancing, bagpipes and recitations and was hosted by The Church of Jesus Christ of Latter-day Saints. Elder Kent F. Richards of the Seventy welcomed all those in attendance. Local news anchor Carole Mikita of KSL Television emceed the program. “Temple Square is historically the place of gathering here in downtown Salt Lake,” Elder Richards said. “It is wonderful to welcome all of these groups to this beautiful place: to this building that is so conducive for musical depth and expression.”

Lt. Governor Greg Bell read the Governor’s Interfaith Week Proclamation declaring 14-21 February as “Interfaith Week: Many Faiths, One Family, Building a World of Harmony.”] He stated that as people of faith, it is our responsibility to uphold and live the virtue which we all espouse so that there may be peace.

The Most Reverend John C. Wester, Bishop of the Catholic Diocese of Salt Lake City, also spoke. He was followed by the Salt Lake Scots Bagpipe Band performing “Highland Cathedral” and “Amazing Grace.” Members of the Sikh faith and Gnostics were part of the performance for the first time this year.

“Interfaith is not about losing faith; it’s about strengthening your own faith,” said Alan Bachman, music chair for the performance and Jewish representative to the roundtable. He compared different faiths to different notes and explained that only when your own note is strong can you harmonize with another note and make beautiful music. “That’s what will make the world work.”

The Interfaith Roundtable is not only dedicated to celebrating different faiths, but also different cultures. The Young Artists of China – Inner Mongolian Musicians opened the program with Chinese traditional music. Later, the Inner Mongolian Dancers performed, each balancing five rice bowls on their heads as they danced across the stage. Chinese culture was also celebrated through the CCTV Galaxy Children’s Choir from Beijing, who sang “Flowers of Friendship” and “Beijing Welcomes You.” These children also performed the latter piece at the 2008 Olympics in Beijing.

Other performances included songs from the Gnostic, Jewish and Baha’i faiths, a Buddhist recitation, Sikh temple chant, reading from the Qur’an, Hindu and Buddhist dancers, and a few numbers the audience was invited to stand and sing with the children’s choir. The performance concluded with a Greek Orthodox prayer.

“It takes a year of preparation. We will start next week for 2011,” Elaine Emmi, a Quaker and past chair of the Interfaith Roundtable, explained. All organizers and participants for the roundtable and its events are volunteers.

“It has been awesome to step back and see the community step forward,” said Jan Saeed of the Baha’i faith and the original chair of the roundtable. She also said it is the spirit of volunteerism that is so important to bringing people together and that is what helps make these efforts successful.

The Salt Lake Interfaith Roundtable was organized in conjunction with the 2002 Winter Olympics in Salt Lake City in order to provide religious support for athletes from all over the world. The group chose to continue their work after the conclusion of the Olympics to promote harmony and understanding. Interfaith week has expanded, even lasting a bit longer than a week, with events such as a food drive, a presentation at the state capitol honoring Presidents Day: Faith of our Founding Fathers and several other events to bring understanding of different religions. The roundtable is dedicated to celebrating religions and cultures and building love, harmony and faith.