We Must Stand Fast a Little | Meridian Magazine

We Must Stand Fast a Little 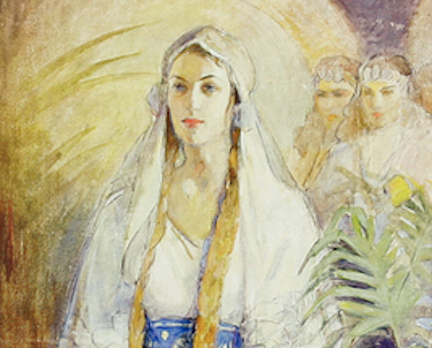 Ahasuerus of Persia knew how to throw a party! He ruled over one hundred and twenty-seven provinces, and when he had been king for three years, he invited “all his princes and his servants; the power of Persia and Media, the nobles and princes of the provinces” too come to Susa, the capital city, for a celebration. While they were there, “he shewed the riches of his glorious kingdom and the honour of his excellent majesty . . . an hundred and fourscore days (Esther 1:3-4). For half a year the rulers and princes and prominent people of Persia gathered at the palace and rejoiced in the glory of their king.

After he had shown off his riches and his honor, he decided to show off his wife.

On the seventh day, when the heart of the king was merry with wine, he commanded . . . the seven chamberlains that served in the presence of Ahasuerus the king, to bring Vashti the queen before the king with the crown royal, to shew the people and the princes her beauty: for she was fair to look on (Esther 1:10,11).

Vashti refused to make an appearance. It’s wrong and I won’t! she said. I refuse to parade for a bunch of drunken politicians and princes!

The decision cost her the throne and her crown, but I am grateful for her example.

When the time comes to do the right thing, we must not consult the consequences before we consult our consciences and our covenants.

Vashti was banished from the presence of the king. She was not allowed to come before king Ahasuerus ever again, and the king determined to “give her royal estate unto another that is better than she” (Esther 1:19).

A search began for a new queen. Esther of the house of Israel was finally chosen. When she was presented to the king, “the king loved Esther above all the women, and she obtained grace and favour in his sight more than all the virgins; so that he set the royal crown upon her head, and made her queen instead of Vashti” (Esther 2:17).

In at least one way, Queen Esther was like Queen Vashti. She was determined to do what was right no matter what it might cost her.

Mordecai, like Vashti and Esther, refused to do something he knew was wrong.   He saved his bowing and his reverence for God alone.

Haman planned a public and awful death for Mordecai, and had a 70-foot gallows erected for the occasion. Mordecai placed his life on the line because he refused to do something he thought was wrong.

But Haman was not satisfied with punishing Mordecai alone. He arranged for the death of all the Jews in Persia.   When this decree of genocide was made law and signed by the king, Esther knew it was time to act.

She determined to visit the king without an invitation, to plead for her people, an act that might have cost her life. She knew that “whosoever, whether man or woman, shall come unto the king into the inner court, who is not called, there is one law of his to put him to death, except such to whom the king shall hold out the golden sceptre, that he may live: but I have not been called to come in unto the king these thirty days” (Esther 4:11).

But she determined to visit the king anyway. Esther said to Mordecai,

Go, gather together all the Jews that are present in Shushan, and fast ye for me, and neither eat nor drink three days, night or day: I also and my maidens will fast likewise; and so will I go in unto the king, which is not according to the law: and if I perish, I perish (Esther 4:16).

Like Vashti and Mordecai, her greatest concern was not her own safety, but doing the right thing.

These three delight me. Each of them in his or her way, determined to do the right thing, regardless of the peril involved.

Others have set similar examples for us.

The wonderful Indian patriot Mohandas Gandhi, who won India’s independence from the British, made a promise to his mother when he was very little that he would remain a vegetarian throughout his life. Many years after his mother died, he became ill, and the doctors tried to persuade him that if he would drink a little beef broth, it might save his life. He replied,

“Even for life itself we may not do certain things. There is only one course open to me: to die, but never to break my pledge. How can I control others if I cannot control myself?” (Cited in Sterling W. Sill, “The Law of the Fast,” Ensign, July 1974, 10).

What a marvelous reflection of the message of the book of Ether: “Even for life itself we may not do certain things . . .”

Lyman Wight was one of the Church leaders captured by the mob at the fall of Far West, Missouri.

On one occasion he was offered any office in the State he would name, if he would swear to a testimony against Joseph Smith. “If you do not do it,” [Moses Wilson] added, “you will be shot tomorrow at 8 o’clock.” Wight replied, “General, you are entirely mistaken in your man, both in regard to myself and Joseph Smith. Joseph Smith is not an enemy to mankind; he is not your enemy, and is as good a friend as you have got. Had it not been for him, you would have been in hell long ago, for I should have sent you there, and no other man than Joseph Smith could have prevented me, and you may thank him for your life. . . . General Wilson said, “Wight, you are a strange man; but if you will not accept my proposal, you will be shot tomorrow morning at eight.” Wight only made the characteristic reply that has become famous, “Shoot and be damned” (Smith and Sjodahl, Doctrine and Covenants Commentary, Sec. 52, p.311).

I feel a reverential awe for such people; people who do not consult the consequences of their actions. I believe we worry too much about what will happen if we do the right thing, rather than focusing all our energy on figuring out what the right thing is. When my brother-in-law proposed to my sister, he said to her, “I cannot promise you that I will always know what is the right thing to do, but I can promise you that if I do know, I will do it.

I believe he always has.

My favorite movie, A Man for all Seasons, is about Thomas More, another man whose life declared, I will do the thing I believe it right no matter what it costs me.

When Henry VIII determined to depart with his people from the Catholic Church and start his own state religion so that he could divorce his current wife and marry another, he required all of the leaders of the country to sign an oath agreeing with his course of action. But More did not agree, and refused to sign. Eventually he found himself imprisoned in the Tower of London for his unwillingness to approve of an action he believed was fundamentally wrong. His daughter, Margaret, came to see him while he was there, to try to convince him to sign. She knew that no one cared what he believed; they only cared that he sign.

Margaret said to him, “In any state that was half good, you would be raised up high . . . for what you’ve done already. It’s not your fault that the state’s three quarters bad. Then if you elect to suffer for it, you elect yourself a hero.’

More responded to her with these words: “That’s very neat, but look now, Meg, if we lived in a state where virtue was profitable, common sense would make us good and greed would make us saintly, and we’d live like animals or angels in the happy land that needs no heroes. But since in fact we see that avarice, anger, envy, pride, sloth, lust and stupidity commonly profit far beyond humility, chastity, fortitude, justice and thought, and have to choose to be human at all . . . why then perhaps we must stand fast a little–even at the risk of being heroes” (A Man for All Seasons, by Robert Bolt, Vintage Books, New York, 1962, p. 81).

The message of the three “heroes” in Esther, and the message of Mohandas Gandhi, Lyman Wight and Thomas More, is the same message. We must “stand fast a little” and let our lives be controlled by our covenants rather than by our fear of consequences.

Thank you, Brother Gibbons, for another insightful article. I'm always glad to see another article from you because I know I will enlightened, and what I learn will "stick" and truly help me.

Shawna, Just hightlight the article and paste in your word processing program. You can print from there. Ted gibbons