Officials from The Church of Jesus Christ of Latter-day Saints joined with community leaders in Meridian, Idaho, on Saturday, 23 August 2014, to break ground for a new temple.

Elder David A. Bednar of the Quorum of the Twelve Apostles presided at the ceremony. He was joined by Elder Kent F. Richards, executive director of the Temple Department. Several community and civic leaders also attended, with Meridian Mayor Tammy deWeerd, Eagle Mayor James Reynolds and Ada County Commissioner Dave Case joining Elder Bednar to turn the first shovels of dirt on the project.

Speaking to the Church members in attendance, Elder Bednar said, “Let your gratitude continue long beyond this day, beyond the day of dedication, into the years when this temple will be a beacon and a light of the restored gospel of Jesus Christ.”

Elder Richards added that Church members now have an opportunity to “prepare for the day when this temple will be ready for you to enter in and participate in those marvelous works with your own family ties and be connected therein.”

The Meridian Idaho Temple was announced by Church President Thomas S. Monson at the Church’s April 2011 general conference. There are currently four operating temples in Idaho, in Idaho Falls,Boise, Rexburg and Twin Falls. There are about 426,000 Latter-day Saints in Idaho. 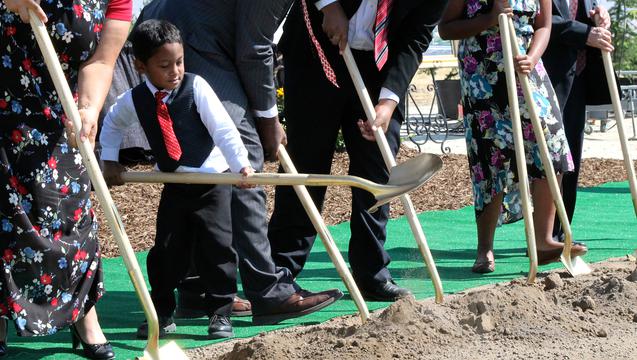 To members of The Church of Jesus Christ of Latter-day Saints temples are the “house of the Lord,” the most sacred places on earth. Unlike meetinghouses, where Sabbath worship and weekly activities take place, temples are open throughout the week and closed on Sundays.

There are currently 170 temples throughout the world either in operation, under construction or announced. Two are being renovated.