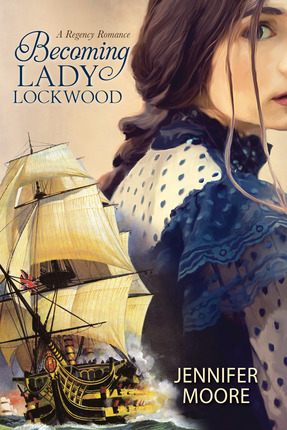 Becoming Lady Lockwood by Jennifer Moore is not your run-of-the-mill Regency Romance. Though I’ve always enjoyed an occasional break from more serious books with an occasional Regency, I’ve grown a bit tired of them of late. Consequently I was slow to pick this one up, but when I did, I received a delightful surprise. Instead of the balls, season, manners, and emphasis on clothing generally paramount in a Regency novel, Becoming Lady Lockwood takes place primarily aboard a British war ship during the Napoleonic Wars and the leading character, Amelia Becket, a Jamaican colonial, has no background nor interest in the “ton.”

Amelia’s mother died when she was ten, leaving her daughter mistress of a very large and very profitable sugar plantation. She’d only seen her father, a British admiral, twice in the intervening years. The more recent visit had been to coerce her into signing a proxy marriage document. She deemed it fortunate that her supposed husband had died four months later, leaving her with all the social advantages of being a widow, but without the inconvenience of an actual husband, an earl she’d never met.

Amelia is shocked when a British naval captain arrives with orders to escort her to London. She resists, but yields to her father’s orders. She’s further confused to learn the ship’s captain is her brother-in-law, William Drake, who just succeeded to his brother’s title and is accusing her of fraudulently marrying his brother to gain a share of his estate.

Unaccustomed to idleness, Amelia busies herself assisting the crew wherever she can and soon endears herself to them as she attempts to learn all she can about the ship and aid with storm repairs, cooking, and medical emergencies. She even breaks down the captain’s antagonism toward her. In the process she learns the ship’s course which was set by the captain’s superiors back in London places them in perilous waters much too close to areas controlled by France and is a major concern and puzzle to the captain and his officers. As expected, their ship is attacked by French war ships.

Amelia is a strong and likable character the reader can’t help cheering for. She’s clever, hard working, and has a fun sense of humor. Though she begins with a somewhat limited viewpoint of life, her experiences as the book progresses broaden her outlook and she becomes more balanced. Most of the characters in this novel are male. A few are developed well, but the less important characters are stereotyped which doesn’t hurt a story of this length.

The plot is handled well, follows a distinct fiction arc, and keeps the reader entertained. Moore delivers punch lines well and in spite of knowing before-hand much of what is going to happen there is no let down by the lack of surprises. A happy ending is a Romance requirement, but the author makes her characters truly work for it.

Jennifer Moore has a BA in linguistics from the University of Utah. She, her husband, and four sons make their home in northern Utah. I trust we’ll see more from this talented author.