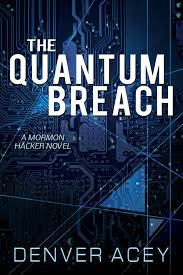 The Quantum Breach by Denver Acey is one of those books that changes the reader’s view of computers and social media forever. It moves news stories such as the hacking of millions of Target credit cards from inconvenience to personal loss. It draws the connection between identity theft and cyber crimes. It shows how easily we play into the hands of industrial thieves or become pawns of foreign governments, terrorists, and domestic criminals bent on treason.

Tanner Zane is about to embark on a two-month sabbatical following seven years of faithful service to his employer. His bags are packed and he’s soon on his way to pick up his parents in Phoenix for the long awaited tour of the Oregon coast. As he drives from his home in New Mexico he reflects briefly on his time at the University of New Mexico, the girl he’d cared about then, his old roommate, and his introduction to hacking. He’d made a fortune with his hacking skills before a sad experience with his grandmother changed his outlook. He’d given away most of his fortune and even joined the Church of Jesus Christ of Latter-day Saints. One thing that hadn’t changed was his addiction to caffeine in the form of Mountain Dew.

He arrives at his parents’ home to find them bound to chairs with duct tape over their mouths. Before he can rescue them, he is captured too. They are taken to separate remote cabins where Tanner learns he has been kidnapped for his hacking skills and that unless he can secure the information from the Los Alamos labs his captors want, his parents will be killed. A secure perimeter has been set up, but to ensure Tanner doesn’t attempt to escape, one of his captors crushes one of his big toes.

It’s fascinating to follow someone who really understands technology as he carries out the various steps of a hacking job targeting one of the most secure installations in the world. Acey doesn’t overwhelm his audience with technical jargon, nor does he over-simplify. There are a lot of violent happenings in this story, but the author handles them the same way he does the technical material, hitting a good balance between necessary facts and too much information.

The characters, even the bad guys, are an interesting mixture of distinct characteristics. Tanner is challenged at several different levels. There is a matter of his personal ethics and promises he made at his baptism. There’s a professional high and some ego involved in attempting to outwit some of the best computer minds in the world. There’s loyalty to his parents. Even his relationship with his captors with their different personalities and their constant supervision of him challenges his ability to survive, keep calm, and think through his complex situation.

The plot is compelling, easy to relate to, but complicated enough to keep the reader’s attention focused. It builds in a satisfying way, foreshadowing is subtle, and all in all, Quantum Breach is a book I can readily recommend to anyone who enjoys a great adventure and anyone who belongs to a social media group.

Denver Acey is a different kind of author. He didn’t set out to be a novelist, though he’s written a highly acclaimed one, he’s really a computer techie. Denver has spent his entire professional career in the information technology industry. He has worked for the US government securing computer networks and for Fortune 500 companies. In his work he has found and disabled cyber crimes and become highly knowledgeable about computer hacking. He sees cyber-crime as a billion dollar business that encompasses organized crime and foreign governments and he is appalled by the casual way most people freely expose themselves online to identity theft.