LDS Fiction: ‘Lord Grenville’s Choice,’ A Regency Era ‘Will They or Won’t They’ 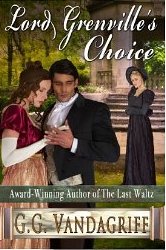 G.G. Vandagriff’s newest book, Lord Grenville’s Choice, is a Regency Romance featuring a young married couple who approached marriage with some faulty reasons for marrying. Alex Lambeth, the Fifth Earl of Glenville had two disasters befall him; the woman he wished to marry married someone else and his estate was facing financial disaster. Felicity was enamored with Alex from the first time she saw him, but knew he was in love with someone else. When the beautiful Elizabeth married another, Felicity persuaded her wealthy father to approach Alex with a marriage proposition. She assumed that with his finances repaired, Elizabeth married to someone else, and her love for him, he will fall in love with her. Instead they spend five years basically each going their own way except for passion filled nights together, then Elizabeth’s husband dies, and both Alex and Felicity have to face their shaky marriage.

Elizabeth assumes Alex will return to her and unfortunately Felicity makes the same assumption. Felicity moves into her father’s house to care for him while he recovers from a stroke, taking her and Alex’s four-year-old son with her. Alex discovers he doesn’t like being separated from his wife and son. Neither does he like the gossip that makes his situation worse. Alex is torn between the woman he has loved since his school days and the wife whom he can’t bear being separated from. A meddling sister doesn’t help his situation. Neither does his father-in-law’s doctor who seems a little too taken with Felicity.

Vandagriff delivers a polished romance that will satisfy any Regency fan and though her writing is squeaky clean, she manages to convey a philosophy much like D.H. Lawrence with the importance she places on physical attraction. Her leading characters are both products of their culture (rich, titled, upper class, early nineteenth century English) and individuals who claim personal standards that go above those demanded by society. Both Alex and Felicity have flaws that make them appear foolish and naive at times, yet both grow and mature as they each make a sincere effort to face reality, do the right thing, and to find truth.

The setting for this story reveals the shallowness of a society devoid of real moral character. As long as people have money, dress well, and belong to the “upper crust” of society, lies, conniving, cheating on their spouses, gambling, are all condoned as normal. Wives are only expected to be physically faithful to their husbands until they have provided the requisite heir. Servants and common laborers are interchangeable with no real identity of their own. The author conveys this well without preaching and while keeping to the lighthearted nature of the Regency novel.

G.G. Vandagriff studied at Stanford University and received a master’s degree at George Washington University. She writes in several different genres and received Whitney awards for The Last Waltz and The Only Way to Heaven. She and her husband, David, have three children and four grandchildren. She loves to travel and makes a yearly pilgrimage to Italy.