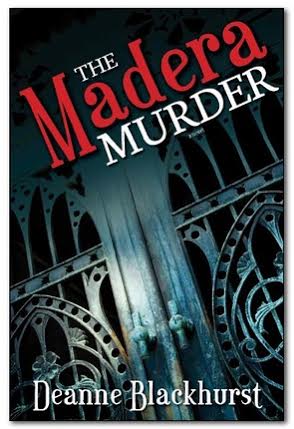 Legend has it that the first Madera bride was unfaithful and that she committed suicide when faced with exposure of her infidelity. The legend extends to a fabulous treasure hidden away by the faithless young woman whose formal portrait has been banished to a dusty tower room of the Madera mansion. In the Madera Murder by Deanne Blackhurst her descendants search for the treasure. One denies the treasure exists, but opens the land to an archeology group. The old grandmother, who adamantly believes the treasure exists, hires an attorney to search for the lost treasure.

Ashley Delgado discovers her dream vacation in Mexico doesn’t measure up to her expectations when she arrives with her attorney father at the rundown Madera Hacienda in Mexico. Her first clue that her father was in over his head should have been when her father drank himself into a stupor on the flight or when they were met at the airport by a surly, unwilling chauffeur.

Ashley soon discovers the old grandmother is not a sweet, helpless senior citizen, but a dictatorial, controlling old woman with a clearly vicious streak who keeps her son and daughter, the household staff, as well as a grandchild under her thumb. She also learns the archeological staff eats their meals with the family and are also not quite as expected. The leader of the group seems to have more than archeology on his mind; the two male students, who are both extremely good looking and accomplished flirts, make her heart flutter, and the two female students are exact opposites. One lives and breathes archeology while the other has no interest in getting her hands dirty, flirts with every male in sight, and shows up almost anywhere except at the dig site. A huge, mentally impaired man also wanders about the estate, showing up at unexpected times and in unexpected places.

The teenage Madera grandson, a boy of about fourteen or fifteen, develops a crush on Ashley and takes it upon himself to give her a tour of the estate, including a few secret places not even his grandmother knows about.

A night out at a village fiesta with three of the archeology students ends with the grisly discovery of a body in one of the towers. Soon Ashley is struggling with not only the question of who committed the murder, but will there be more than one murder linked to the Madera treasure?

Pacing is handled well in this novel and the plot arc keeps the reader’s attention. I can’t say that I identified with any of the characters, or even particularly liked any of them—except the little female archeology student who was in love with her work. The main character has a tendency to take foolish, impulsive chances, but is intelligent and true to her personal standards. I found the setting realistic and was pleased to see the Mexico setting neither romanticized nor turned into a poverty stricken ghetto. The ending, however, is a little too convenient.

The Madera Murder is Deanne Blackhurst’s third novel and though it has some shortcomings, overall it is an enjoyable read that shows great promise from a fairly new writer. She and her husband are the parents of six children. She loves to travel and sample different cultures and cuisines.