Gene Schaerr: Why Courage is Required to Fight for Traditional Marriage | Meridian Magazine

Gene Schaerr: Why Courage is Required to Fight for Traditional Marriage

Do you have the courage to stand for marriage? Come to an event: Stand for Marriage-Stand for Amendment 3, Tuesday night, Jan. 28, at 7:00 at the Utah Capitol Rotunda. Click here for more details. 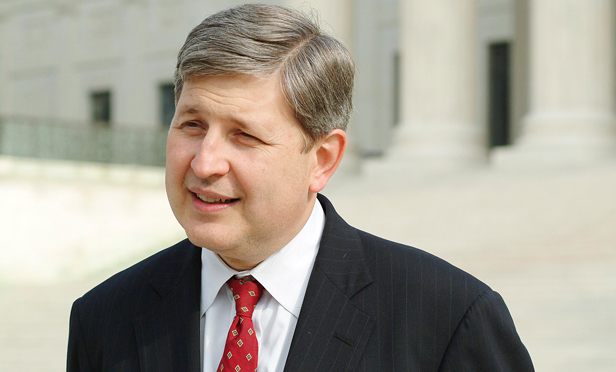 When Gene Schaerr agreed to be the lead outside counsel to Utah Attorney General Sean Reyes in defending the state’s marriage amendment, it was no small decision. You wouldn’t suppose that it would take courage to fight for traditional marriage, religious liberty and the consent of the governed. These are foundational pillars of our American understanding.

After all, it was only 20 years ago that a Defense of Marriage Act passed Congress by a majority vote of 85%. How times have changed.

What has been little noted is that Schaerr had to leave Winston and Strawn, his major international law firm with 17 offices across the globe, where he was chair of the Appellate and Critical Motions Practice to take the case.

Law firms, of course, are about the business of adding clients-and the state of Utah could be one of those-but instead Schaerr had to exit to take the case. On the one hand he had major, powerful and high-paying career and on the other the defense of something he believes is critical to the well-being of our society.

As journalist Ian Millhiser noted, “Simply put, lawyers do not typically resign from law firms because they take on a new client – taking on new paying clients is exactly what makes a law firm’s partners valuable to the firm.” Schaerr clearly had to make a difficult choice of maintaining his association at Winston and Strawn or defending marriage, leading Millhiser to ask “Are Anti-gay Clients Now Too Toxic for Big Law Firms?”

Winston and Strawn has been opaque about why Schaerr left, but it is easy to see some parallels with an earlier case.

Three years ago Atlanta-based law firm King & Spaulding agreed to represent the Republican-controlled House of Representatives to defend the constitutionality of the Defense of Marriage Act, when only one week later they pulled out. The reason? Coca-Cola and other of the firm’s top clients made it clear that there would be recriminations for defending marriage. Though a Coca-Cola spokesman refused to comment on the case he did point to the company’s long-time public history of support for equality and diversity.

Other of their clients confirmed that if the firm defended marriage, they could foresee problems both internally and with customers.

Fred Sainz, a Human Rights Campaign spokesman, told the media , “Law firms are probably most attentive to two issues: Their clients and potential new recruits. When you start messing with either of those from a reputational perspective, that’s when they stand up and take notice when there’s a problem,” Sainz said. “We were launching a very targeted campaign at both of those.”

In other words, watch out if you are a big law firm and think to defend marriage. We will watch and you will pay. High-powered law firms in New York and Washington DC want to stay clear of defending marriage because the costs are high.

The old lawyerly ideal that every one deserves legal representation and their day in court apparently does not hold where defending traditional marriage is concerned. Oh, how the noose does tighten around the speech and choices of those who defend marriage.

In this case, however, it wasn’t just Gene Schaerr who made a tough choice. So did Winston and Strawn. They let one of their powerhouse attorneys, with sterling credentials, leave.

Publius Online said, “It’s notable that Schaerr served as law clerk to US Supreme Court Chief Justice Warren E. Burger and Justice Antonin Scalia and is regularly rated as one of the best attorneys in the country, including recognition by U.S. News & World Report and Best Lawyers 2014. He was also named in Best Lawyers in America in the specialty of appellate law in 2009-2011.

He has an 80% win rate in the 10th Circuit Court of Appeals and has won 75 percent of federal appeals he has argued. He has handled more than 100 cases in federal and state appellate courts and has argued many times before the Supreme Court.

Apparently, no amount of excellence can make up for the fatal flaw of supporting traditional marriage. Our hats are off to Gene Schaerr for the courage to step forward in this watershed moment in our national culture. We acknowledge that he is paying a dear price.

Gene, you have the courage of Captain Moroni! Gene and Martha are sacrificing a great deal to stand up for their and our beliefs. I am certain that the Lord will bless you. Thank you Gene and Martha!

Dear Brother and Sister Proctor, I love Meridian Magazine! I have been a faithful reader and contributor for many years. In fact I was first introduced to the Magazine by my fellow ward member Kathy Kidd when we lived in Virginia in the early 90's. I am so grateful for the work that you do in sharing the light of the gospel and building up the Kingdom of God here on earth. I know that our Heavenly Father is pleased with your courageous and valiant efforts on His behalf. I am saddened to realize that in some way the choices I have made in my communications have caused you concern. I ask for your forgiveness and pray that Father's choicest blessings may be poured out upon you and yours. May God continue to magnify you in your righteous endeavors. Blessings, Shauna Broderick