Evangelist and author Dr. Ravi Zacharias addressed the topics of faith, family and freedom in a gathering at the Tabernacle on Temple Square on Saturday, 18 January 2014. “We must build our lives on things that are eternal,” Zacharias told more than 3,000 gathered in the Tabernacle in his message titled “Lessons From History, Building a Nation Under God.” During his speech, he related lessons learned from the Bible and compared them to modern-day events. 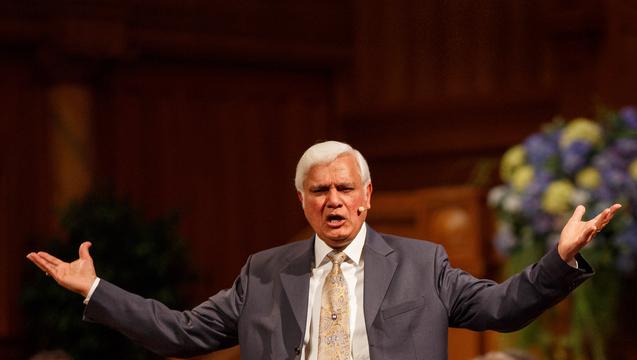 This is the second time Zacharias has spoken in the Tabernacle and his third visit to Utah since 1994. Zacharias is founder and president of Ravi Zacharias International Ministries, headquartered in Atlanta, Georgia, with offices in Canada, India, Singapore, the United Kingdom, the United Arab Emirates and Hong Kong. The event was presented by Standing Together, a network of evangelical congregations in Utah, and hosted by The Church of Jesus Christ of Latter-day Saints to promote religious freedom.

Elder Jeffrey R. Holland of the Quorum of the Twelve Apostles greeted the large audience of religious leaders and “friends of all faiths” in the historic Tabernacle, which has been the setting of worship and inspiring music for 150 years. “World leaders and men and women of many faiths have spoken here, including Dr. Zacharias in 2004,” said Elder Holland. “We’re very, very happy to have him back.”

“I say that, in part, to assure many who may be wondering whether tonight’s gathering of evangelicals and Latter-day Saints under the same roof is being interpreted as clear evidence that the apocalypse is upon us,” he quipped. “Who knows, it may be.”

Elder Holland said those in attendance had a “shared love of Jesus Christ.” “But in an increasingly secular world and facing the attack on religious faith and religious freedom that we see all around us, it is imperative for the extended Christian community to acknowledge that what we have in common is so far-reaching and so potentially powerful in addressing the ills of society and of the soul that the very least we can do is know and understand each other better than we do,” he added.

Zacharias said we have a common cause in trying to create a good moral soil in this culture.  “Moral soil is very critical in which reasoning and art can flourish,” he said during an interview at the Good Shepherd Lutheran Church in Sandy. Zacharias expressed concern about what happens “when the nation is led in a rabid, secularistic way of thinking.” He voiced disappointment in the way academics are treating religious thought around the world. “The key is what we ultimately do with our children,” Zacharias said. He urged parents to guide their children through the “mine field” they encounter in the media, even at a younger age than ever before.

“Before we can clean house in a nation, we actually have to do some soul searching of our own house – what is going on in the house of the Lord, what do we believe, why we believe it and the centrality of God’s purpose for our life,” he said during the interview.

“We have lost our moorings,” Zacharias told the diverse audience in the Tabernacle, as “we live beyond our moral means and our fiscal means and spiritual means.”

Zacharias travels 200 days a year sharing his message of the gospel of Jesus Christ as a Christian apologist. During an interview earlier in the week, he shared one of his favorite scriptures, which states, “For I am not ashamed of the gospel of Christ” (Romans 1:16).

“The gospel gives purpose,” he told the Tabernacle audience. “We don’t change people’s lives. Only God is big enough to do that.”

“We talk so much about one’s rights that we talk so little about what is actually right,” Zacharias stressed to the crowd.

He encouraged the audience to read the scriptures. “Open the scriptures and make a commitment to read the Gospel of John,” Zacharias said. One of his favorite scriptures found in John was instrumental in his conversion to Christianity at the age of 17 while he was growing up in India. He was given a Bible while hospitalized following a suicide attempt. It reads, “Because I live, ye shall live also” (John 14:19).

“Most people cannot think for themselves anymore,” he said. “The world out there is caught in this vortex of relativism.”

“We will never change the outside until we change from within,” Zacharias concluded.  “Redemption is prior to righteousness.”

During his visit to Utah, Zacharias also spoke to students at Brigham Young University in Provo.