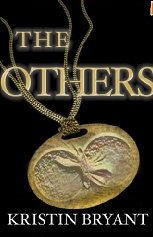 The Others by Kristin Bryant introduces an interesting premise. On a planet far out in space a civilization of people similar to earth’s humans live and observe earth. They have the exact same DNA as humans, but are more advanced scientifically and less in the arts and music. They have retained a tribal culture and limited personal freedoms. Their ancient records foretell the birth of a savior on another world, who will be their savior too. Their observations have convinced the inhabitants of Zhimeya that Jesus, born on earth, is the fulfillment of the prophecy and that the humans living on earth are hiding the evidence of his identity the Zhimeyans are searching for. Some are convinced that those populating the “holy planet” are not worthy of the great honor and should be eliminated, with earth then to be ruled by the Master and Tribunal leaders who also desire absolute control of Zhimeya.

Ryen is part of an exploratory party sent to earth to obtain the proof the Masters are seeking. He is unaware that the Masters also plan to use him and others of the party to destroy the humans and to subjugate his own people to the control of the Masters. In Jerusalem he meets Savannah who is drifting from place to place in an attempt to forget her painful past. When she shows up on the same flight as Ryen on his way to the Yucatan Peninsula to follow up on a rumor of a savior who appeared to the ancient inhabitants of that land, his assistant offers her a job. As his feelings for this earth woman grow, Ryen must make a painful decision. It is illegal, and she would be killed if he takes her to Zhimeya, so he must either leave her behind or resign his commission and stay on earth with her. Unfortunately the Masters take the choice out of his hands.

I don’t often review science fiction novels, but I found some of this story’s premises and references interesting as they hint strongly at connections to LDS doctrine and to Christian religions’ suppositions concerning “sheep I have that are not of this fold” and the creation of “worlds without end.”

For a people advanced enough for intergalactic travel, the people of Zhimeya have a lifestyle a little more socially primitive than I can buy into. The author speaks of a need for a unifier to unify the various tribes, but never shows any real discord between them and they’re all represented in one tribunal. Though I found the background with dinosaurs and a primitive area where prisoners are sent, never be heard from again, far-fetched, I found the people of this strange world portrayed well with their hopes, greed, love, kindness, hunger for power, and array of good and bad human emotions. Without prophets and unable to translate ancient writings, many of which are damaged, their religion has deteriorated to the point where no one knows what is history and what is myth.

Ryen is a character readers can identify with and applaud his moral growth and maturity. Back story for him and for Savannah is sketchy, but sufficient. The secondary characters are interesting and well done. The other members of Ryen’s expedition are particularly likable. Most of the villains are equally unlikable, though Ryen’s former girlfriend is complicated and draws a mixture of responses.

The story is plotted well with enough excitement and adventure to keep the reader turning pages. Even when I found myself unable to suspend belief concerning the odd mixture of primitive and futuristic background elements, the story still held my interest. I suspect there will be a sequel and I’ll read it too.

Kristin Bryant is a teacher, an author, and, most importantly, a mom. She graduated from Brigham Young University and received a Masters of Education from California State University, Fullerton. She teaches anthropology and psychology for a virtual high school and lives in California with her husband and two sons.