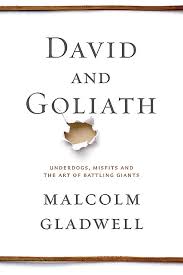 David and Goliath is the newest book to come from Malcolm Gladwell who is a well-known writer for The New Yorker and the best-selling author of such books as The Tipping Point, Blink, and Outliers. I was very excited for this book to come out since I have read most of Gladwell’s other books and thoroughly enjoyed them and I picked it up as soon as I could. The premise of the book intrigued me and is clearly revealed in the subtitle of this work, which is Underdogs, Misfits, and the Art of Battling Giants.

Gladwell begins his book by reviewing the story of David and Goliath from the Bible. He talks about how some of the weaknesses we perceive in David (the little guy) might actually be considered advantages, and what we might think of as strengths in Goliath (the big guy) may in reality be disadvantages. It is an interesting concept indeed. He then goes on to give accounts about other situations in which people who were in what might have been considered positions of weakness are able to overcome and succeed in their circumstances despite, or even because of, their challenges.

This seemed like a very relevant theme to me since, as many people do, I spent time on Thursday (Thanksgiving) with my family reflecting on the blessings in our lives and remembering all the things that we have to be grateful for. When speaking about gratitude, I often hear people mention that they are grateful for their trials and the hard things in their lives as well as the good times. Sometimes I think this seems counter-intuitive. Why would someone be thankful for the challenges they face? Doesn’t this just make life less enjoyable? Gladwell’s book brings some insight to this idea of the value of our trials as he discusses how hardships can in some cases benefit those who experience them.

As Gladwell, himself, says in the first chapter of his book, “Each chapter tells the story of a different person-famous or unknown, ordinary or brilliant-who has faced an outsize challenge and been forced to respond. Should I play by the rules or follow my own instincts? Shall I persevere or give up? Should I strike back or forgive? Through these stories, I want to explore two ideas. The first is that much of what we consider valuable in our world arises out of these kinds of lopsided conflicts, because the act of facing overwhelming odds produces greatness and beauty. And second, that we consistently get these kinds of conflicts wrong. We misread them. We misinterpret them. Giants are not what we think they are. The same qualities that appear to give them strength are often the sources of great weakness. And the fact of being an underdog can change people in ways that we often fail to appreciate, and educate and enlighten and make possible what might otherwise have seemed unthinkable.”

As Latter-Day Saints, we are asked to consider our blessings on a regular basis and commanded to give thanks to our God who has given us everything. But there are times when this is very hard to do and it is easier to look at what we lack in our lives or what others have that we do not. This is especially easy to do when we think of temporal things.

Gladwell has a good comment on this idea as well. He reminds us that “There is a set of advantages that have to do with material resources, and there is a set that have to do with the absence of material resources-and the reason underdogs win as often as they do is that the latter is sometimes every bit the equal of the former. For some reason, this is a very difficult lesson for us to learn. We have, I think, a very rigid and limited definition of what an advantage is. We think of things as helpful that actually aren’t and think of other things as unhelpful that in reality leave us stronger and wiser.”

The blessings we receive from our Heavenly Father are not necessarily the ones we think they should be. And they may not be blessings that the world at large would recognize as such. But they are huge advantages to us nonetheless. One example that comes to mind for me is the early Mormon pioneers. You would think that being driven from their homes and being forced to migrate to the West in order to avoid persecution would be a very great disadvantage to them. Indeed, they were made to endure terrible things on their trek to the Salt Lake Valley, but in the end they were blessed with a strength and fortitude that they probably could not have gained in any other way and they were able to build a flourishing community that they could not have established in any other place.

And even things that truly are disadvantages can make us stronger in the end. Gladwell gives examples of this in his book. One such example is David Boies who struggled with dyslexia his whole life and consequently, had a difficult time in school. In spite of that fact, he became a brilliant trial lawyer. Working as a lawyer relies heavily on reading and writing statements for trial and this was a hard task for someone who could not read well or quickly.

Because he had a hard time with reading, Boies had to learn different strategies and shortcuts to get around this challenge. He learned to memorize information as he listened to it so that he did not have to rely on his reading skills and he chose an area of law (litigation) that required him to listen to testimony and ask questions instead of doing a lot of reading. Gladwell uses this as a lesson, saying, “Most people with a serious disability cannot master all those steps. But those who can are better off than they would have been otherwise, because what is learned out of necessity is inevitably more powerful than the learning that comes easily.”

I think that the lessons the Lord requires us to learn out of the necessity of our trials are to make us more powerful. Only in dealing with hardships are we able to build our character and gain the skills we need to become more like our Father in heaven anyway. And our Savior is always there to strengthen us in those trials and give us the power to overcome them.

Gladwell quotes the scripture in 2 Corinthians 12:7-10 to illustrate this point: “I will boast all the more gladly about my weaknesses, so that Christ’s power may rest on me. That is why, for Christ’s sake, I delight in weaknesses, in insults, in hardships, in persecutions, in difficulties. For when I am weak, then am I strong.”

This is echoed again in the Book of Mormon when in Ether we are told, “And if men come unto me I will show unto them their weakness. I give unto men weakness that they may be humble; and my grace is sufficient for all men that humble themselves before me, and have faith in me, then will I make weak things become strong unto them.

One of the things that we gain by facing hardships is courage. I love the message that Gladwell gives in this book. He says, “Courage is not something that you already have that makes you brave when the tough times start. Courage is what you earn when you’ve been through the tough times and you discover they aren’t so tough after all.”

We could not gain the courage and strength that we need to make it through this life and endure to the end to receive the blessings that are awaiting us in the life to come if we do not encounter difficulties and hardships in this mortal existence. The courage and power that we need to truly be like our Heavenly Father could not be attained in any other way. For this reason we should all be grateful for the trials and “disadvantages” (as Gladwell puts it), we experience so that we can be stronger in the end.

David and Goliath is a fast, easy, and engaging book that I would suggest to any reader, young and old. It has great insight and ideas that anyone could use to find more joy and understanding in life. I highly recommend it.