Is the Context Important for This Popular Science and Religion Quote? | Meridian Magazine

Is the Context Important for This Popular Science and Religion Quote?

In the recent “Science and Mormonism” conference on November 9, 2013 in Provo, Utah, one of the most popular statements from the First Presidency of the Church on science was emphasized. This quote has an interesting history and context.

Here is the quote:

“Leave geology, biology, archaeology and anthropology, no one of which has to do with the salvation of the souls of mankind to scientific research, while we magnify our calling in the realm of the Church.” 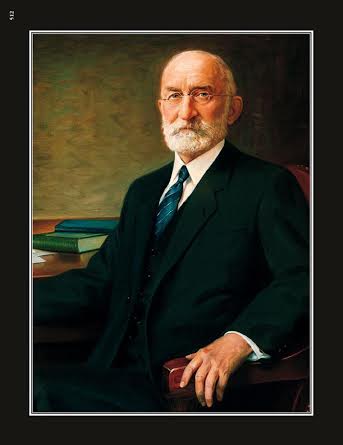 President Heber J. Grant and his counselors considered in 1931 many issues regarding science and religion.

This quote comes from the minutes of a First Presidency meeting dated April 7, 1931 and is in a memo from President Heber J. Grant to the other General Authorities during an important series of meetings about the manuscript of Elder B. H. Robert’s new book. It was not sent to the general membership of the Church.

Elder B. H. Roberts of the Presidency of the Seventy sought approval from the Brethren for his new book “The Truth, The Way, The Life.”

“The Truth, The Way, The Life”

Elder B. H. Roberts of the Presidency of the Seventy was seeking approval from the Brethren to publish a new book entitled “The Truth, The Way, The Life.” A particularly controversial part of the book was a discussion of pre-Adamic human races and how they would fit in with Adam and Eve and the time line of the creation and the fall. Three General Authorities were particularly involved in the discussions, Elder Joseph Fielding Smith, Elder James E. Talmage and Elder B. H. Roberts.

Memo to the General Authorities

In an article about the meetings, at one juncture of the discussions, Elder Talmage “made it clear to his assembled brethren that all reputable geologists recognized the existence both of death and pre-Adamites’ prior to 6,000 years ago, the presumed date of the fall of Adam. This view, of course, was vigorously denied by [Elder Joseph Fielding] Smith, and a serious disruption between and among certain brethren’ was in the offing. It was at least partly to avoid such disruption that the First Presidency sought to settle the dispute quickly without committing themselves to one side or the other with their memo of 7 April.”

There were two results of these meetings by the First Presidency and the other General Authorities on science and evolution. The first result was that Elder Roberts’ book was not endorsed nor published during his lifetime.

Elder Joseph Fielding Smith presented a view including no death before the fall and no pre-Adamic human races. He later published “Man: His Origin and Destiny” in 1954.

The second result was to authorize Elder James E. Talmage to give an official address entitled “The Earth and Man” in the tabernacle on August 9, 1931. Elder Joseph Fielding Smith had earlier given an address in April 1930 at a genealogical conference and Elder Talmage’s talk brought out some views not espoused by Elder Smith as well as many that they agreed upon. This talk was later published as a pamphlet by the Church.

Elder James E. Talmage delivered a landmark address in the tabernacle after these lengthy discussions among the General Authorities in 1931.

Several of key quotes from Elder Talmage’s talk show how relevant his words are today as well as they were in 1931.

“Believe not those who would make man but little above the brutes, when in truth he is but little below the angels.”

“I do not regard Adam as related to-certainly not as descended from-the Neanderthal, the Cro-Magnon, the Peking or the Piltdown man. Adam came as divinely directed, created and empowered.”

“Were it true that man is a product of evolution from lower forms, it is but reasonable to believe that he will yet develop into something higher. While it is a fact that eternal progression is a characteristic of man’s Divine birthright, as yet we have learned nothing to indicate that man shall develop physically into any other form than that in which he now appears.”

“Evolution is true so far as it means development, and progress, and advancement in all the works of God; but many of the vagaries that have been made to do duty under that name are so vague as to be unacceptable to the scientific mind. … Within the Gospel of Jesus Christ there is room and place for every truth thus far learned by man, or yet to be made known. The Gospel is not behind the times, on the contrary it is up-to-date and ever shall be.”

There are no other First Presidency statements like the famous quote and therefore, I believe that it is probably more related to the specific context and not a general admonition to Church members. It would also be important to study the talk by Elder Talmage that represents the more complete context of the discussions and inspired decisions made during 1931 that continue to affect us today, years later.

Elder B. H. Roberts, Elder Joseph Fielding Smith and Elder James E. Talmage, the major participants in these discussions, each emphasized key issues. These included the divine origin of man, the spiritual and physical creation, pre-fall death, the terrestrial garden of Eden, the fall and the atonement within the history of this earth, one of the “worlds without number” of God’s creations. (Moses 1:33)

These three Brethren each made valuable contributions that have enabled the Church to not become mired in many areas of controversy that have affected other churches while not diluting the revealed doctrines of the restoration.

Maurine Proctor, “Science and Religion: can This Marriage be Saved?” Meridian Magazine, November 13, 2013. 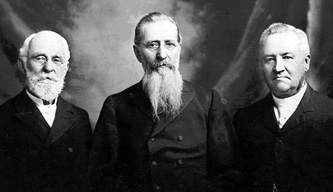 President Joseph F. Smith, with counselors John R Winder and Anthon H. Lunt in 1909 issued a detailed statement on science and the theory of evolution.

“These two points being established, namely, the creation of man in the image of God, and the twofold character of the Creation, let us now inquire: What was the form of man, in the spirit and in the body, as originally created? In a general way the answer is given in the words chosen as the text of this treatise. “God created man in his own image.” It is more explicitly rendered in the Book of Mormon thus: “All men were created in the beginning after mine own image” (Ether 3:15).”

“Man is the child of God, formed in the divine image and endowed with divine attributes, and even as the infant son of an earthly father and mother is capable in due time of becoming a man, so the undeveloped offspring of celestial parentage is capable, by experience through ages and aeons, of evolving into a God.”

This page in the Biology department at BYU contains the 1909 statement, a 1910 addition, the 1925 statement and the short extract from the 1931 First Presidency minutes that contains the famous quote.

RPMNote: Another indication to me that the memo was just to the General Authorities in that particular context is the question of who, among the General Authorities involved, fulfills the quote from President Grant: “leave geology, biology … to scientific research.” Elder Talmage is the geologist and apostle. He is the one that gives the talk in the tabernacle as a resolution of the discussion to balance out Elder Joseph Fielding Smith’s talk, not B. H. Roberts. Perhaps that is also part of the reason for the quote as we have it from the memo. Also, with the discussions as we understand it, I would think that biology would be mentioned first. But it is geology. Elder John A. Widtsoe, the biologist, is in the meetings as well (apostle 1921 – 1952), but is not mentioned as being active in the discussions. The Lord works through the capabilities of each of His servants, I think this may be an additional testimony that Elder Talmage was specially prepared for this and other missions.

Another indication that this quote should be taken in context of the 1931 discussions is the next sentence of the memo recorded in the minutes that is extracted in the Encyclopedia of Mormonism entry. “Upon one thing we should all be able to agree, namely, that Presidents Joseph F. Smith, John R. Winder, and Anthon H. Lund were right when they said: Adam is the primal parent of our race'” There are many, many things that Elder Joseph Fielding Smith, Elder James E. Talmage and Elder B. H. Roberts have in common much more than just that statement. But, the discussions focused particularly upon the relationship of pre-Adamic races to Father Adam and Mother Eve. This short conciliatory memo from the First Presidency did not need to be comprehensive. Compare “Man: His Origin and Destiny” by Joseph Fielding Smith, “The Earth and Man” by James E. Talmage and “The Truth, The Way, The Life” by Elder B. H. Roberts and you will see many areas of agreement among the three.

Why do you take out of context, Read verses 14-17, It's not talking about the creation of man, In verse 9 we see a similar thing through 12,18,25, It seems that the organization of elements to form the earth was not instantaneous: rather, it took some time for the elements to organize as commanded. In verses 11,12, you see that Abraham places an emphasis on each plant's reproducing after its "own kind. "Whose seed could only bring forth the same in itself, after his kind." This tends to discredit theories in which God's creations evolve from one major species to another.

Thee is so much we do not know about how the earth and its inhabitants were created, and we will likely never know it all in this life. However, the evidence for evolution is very strong, although it does not necessarily deny the divine creation of man. Abraham 4:18 states: "And the Gods watched those things which they had ordered until they obeyed." This scripture allows me to believe that the physical bodies of men did evolve UNTIL THEY OBEYED (which means such evolution was complete), at which time the Lord placed the soul of man into the evolved body and Adam became.