Tired but cheerful, 71 missionaries from the Tacloban mission arrived in Manila 8:00 on November 12.  Bringing with them minimal items since many of their belongings were washed out by Typhoon Yolanda, they immediately jumped off from the bus and embraced Elder Brent Nielson who had been eagerly waiting for them the whole afternoon till evening. 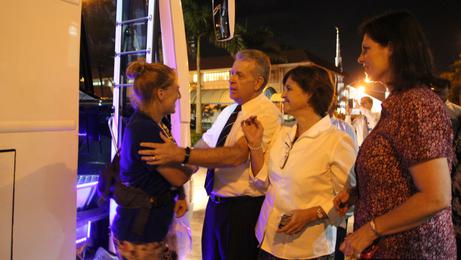 Greeted with cheers and smiles from those who welcomed them, they gathered for a short meeting with Elder Nielson who enumerated things they would do for the next few minutes.  They were given warm blankets, were led to the Missionary Training Center cafeteria for a hot meal, chose clothes and personal item they can change into and connected with family and friends through skype and calls. 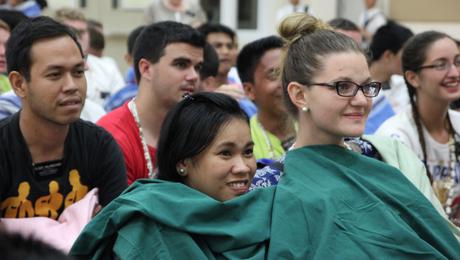 Relief was written all over their faces.  However, as questions were entertained towards the end of the briefing, instead of asking for the provision of basic necessities, they asked if they can be updated on the state of loved ones they left behind in Tacloban.  Until this time, their priesthood leaders are still on the ground ministering to the needs of members and coordinating with the provision of relief goods.

A few cried silently, many clung to their companions who had been their constant support while others huddled in big groups sharing each of their adventures.

Many of them had walked 50 kilometers just to get to the airport to rendezvous with other missionaries.  Elder Ardern, Benson Misalucha and Jose Andaya, their mission president who had been trying to locate each of his missionaries in the last few days, were at the airport to arrange for a flight to bring them to Manila.

The rest of the 133 missionaries will be arriving today. 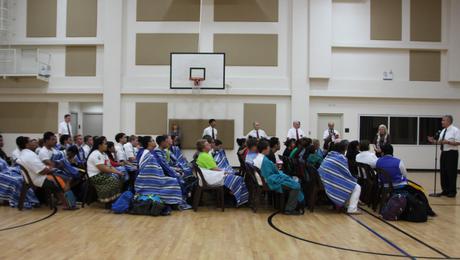 Not one of the 204 missionaries assigned in different parts of Leyte was lost.  Each had a story to tell.  They spoke of the tender mercies of Heavenly Father and Jesus Christ who had been their companion amidst the ferocity of the storm and the devastation they witnessed after.  As they walked from their areas to the airport, they related seeing dead bodies on the streets and people in a daze walking aimlessly searching for food and water while others were carrying dead family members and relatives.

The missionaries will be given a stress debriefing today by Sister Marcia French, the Area Mental Health Officer who is also a trained therapist and first responder.

These missionaries will stay in Manila until such time that they will be reassigned to the 9 other missions in the Luzon area.  Those who are about to finish their mission will have the opportunity to return home early and be with their families for Christmas.  One American missionary welcomed the challenge of learning Tagalog since their language training had focused on Cebuano.

As early as Monday evening, all of the missionaries were already on the list to board the C130 Air Force plane. They had been bumped off a lot of times and were patiently waiting for their chance to take the flight.

A US Marine, seeing the stranded missionaries, arranged for them to board a US plane to carry them to safety in Manila. 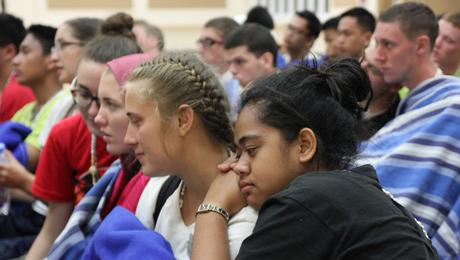 This is the news that I waited to hear! It was a relief to know they were all safe. It was a harrowing experience to go through and to know that God had His protecting arm on them was wonderful. I know there were many civilians greeted with love on the other side when they arrived there in Heaven. God loves all His children and knows their number of days.

Welcome news, indeed! I know these missionaries have been in the prayers of members over the world. That they all should come through such a terrible ordeal is a miracle. Prayers continue to go out to the victims of the storm and their families and friends. Such a heartbreaking event....