Boy Scouts and Church Celebrate a Century of Scouting

The great outdoors came inside the 21,000-seat Conference Center in Salt Lake City, Utah, as The Church of Jesus Christ of Latter-day Saints and the Boy Scouts of America celebrated 100 years of Scouting together in a program titled “A Century of Honor.”

The celebration’s theme was a reflection of the Church and Scouting and how the values and principles have remained constant during the last 100 years of partnership. The Church’s Duty to God incorporates Scouting practices to help young men prepare to serve and lead. Part way through the program, Scouters stood and repeated the Scout Oath. 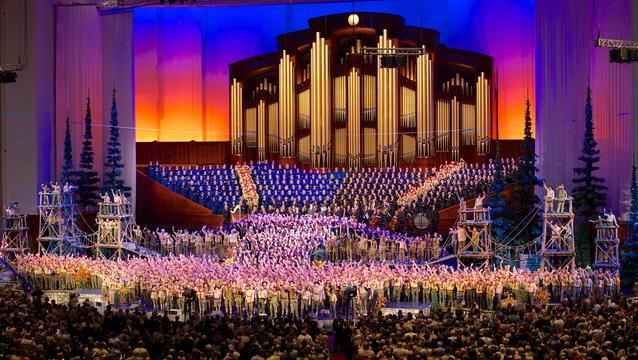 Hundreds of Boy Scouts participated on the Conference Center stage along with a Cub Scout choir, an Eagle Scout choir and the Mormon Tabernacle Choir in celebration of the Church’s 100-year partnership with the Boy Scouts of America

Church president Thomas S. Monson, in remarks after receiving recognition for his lifelong support and exemplary leadership of Scouting, said he was grateful for Scouting’s influence in his life. “If ever there were a time when the principles of Scouting were vitally needed, that time is now.” He encouraged boys to follow Scouting’s values, as they will be a guide in life.

The 90-minute program started off with two Boy Scouts rappelling from the rafters down to the stage carrying the American and Boy Scout flags. Trumpeters, located throughout the Conference Center, sounded the call to attention, a choir of Cub Scouts sang the national anthem and a Scout led the audience in the Pledge of Allegiance.

The stage was a Scout camp setting with trees, logs lashed together standing more than 10 feet high as lookout posts, campfires, a mountain background and bright stars in the sky. A familiar Cub Scouting activity on stage was the pinewood derby. 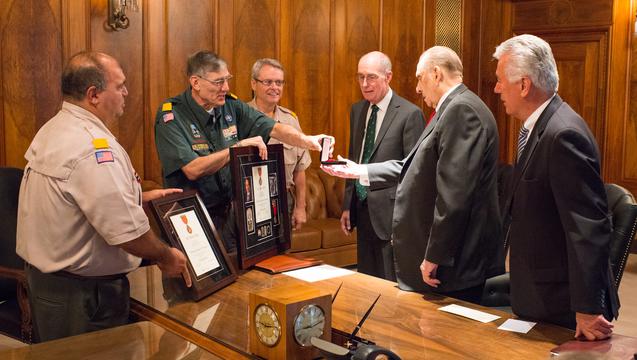 Earlier in the day, national Scouting executives presented President Monson with the Honor Medal. The award reads, “For unusual heroism in saving or attempting to save life at considerable risk to self.” He was recognized for saving a girl from drowning in a river when he was 12 years old.

In addition to this recognition, BSA president Wayne Perry announced at the evening’s program that the Thomas S. Monson Leadership Excellence Complex will be constructed at the 10,000-acre Summit Bechtel Reserve in West Virginia. The complex will be a central fixture at the reserve to teach boys leadership principles and how to apply them.

The program, while honoring Scouts and Scout leaders, noted that it is mothers who are the unsung heroes of Scouting. A group of Scouts with their tuned guitars and voices said they wanted to make moms the “sung” heroes. They performed a song, bringing a tear to the eye, “Ma, you earned your Eagle, … but they gave the badge to me.”

David L. Beck, general president of the Church’s Young Men organization, said mothers play a vital role in Scouting. “They have helped many Scouts attain the rank of Eagle Scout.” 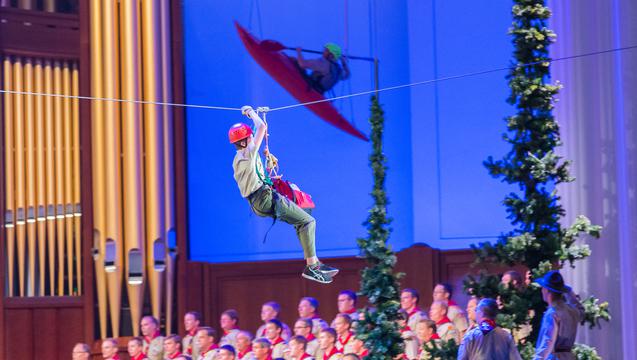 The principles of Scouting continue to be relevant today, said the Young Men leader. “It has values and is a program that is robust and helps us achieve the purposes we have for young men of being self-reliant, to be confident in what they do, be oriented and serving others.”

“Service is at the heart of the Scout Oath,” Beck explained. “The Scout Oath says, Help other people at all times.’ That’s quite a promise.” He said the young men need to be thinking of others and looking for opportunities to bless.

A surprise finale included the Mormon Tabernacle Choir and Orchestra at Temple Square performing “Battle Hymn of the Republic.”

I was thrilled to tears as I passively participated in this broadcast. I am proud to acknowledge the role that my parents played in helping me achieve the rank of Eagle. The Oath and Law have been guiding lights and the foundation throughout my life. I am truly a Life Scout; I want to live a Scout and to die a Scout.

Although an Australian citizen, and never having been a Boy Scout myself, all the same, I felt the spirit and honour of this auspicious occasion of the Churches association with the Boy Scouts of America, now over one hundred years! What an example to the free world that is! And good on President Monson too for being the example to the world over his many years, testifying of the 'goodness' that there is in the scouting movement and of its benefits to young men and boys !