Baptist Leader at BYU: “We Share a Common Urgency” 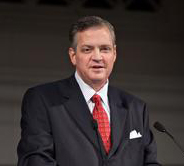 A Baptist leader speaking at BYU this week declared, “I do not believe that we are going to heaven together, but I do believe we may go to jail together” in addressing the fundamental concerns that we as people with religious conviction share. Concerns that have brought and will likely continue to bring us under attack in our current society.

Dr. R. Albert Mohler, president of the Southern Baptist Theological Society in Louisville, Kentucky, acknowledged that our churches have fundamental theological differences, but that that shouldn’t stop us from engaging in worthwhile discussion:

“…we are living in the shadow of a great moral revolution that we commonly believe will have grave and devastating human consequences. Your faith has held high the importance of marriage and family. Your theology requires such an affirmation, and it is lovingly lived out by millions of Mormon families. That is why I and my evangelical brothers and sisters are so glad to have Mormon neighbors. We stand together for the natural family, for natural marriage, for the integrity of sexuality within marriage alone, and for the hope of human flourishing.”

The link to his blog does not list his address at BYU. I used the search engine provided on his blog for "BYU" and "no matches were found". Did he not list this address on his blog? Anyone found the full address?