The Highly Effective Missionary: Bold and Innovative Approaches to Hasten the Work 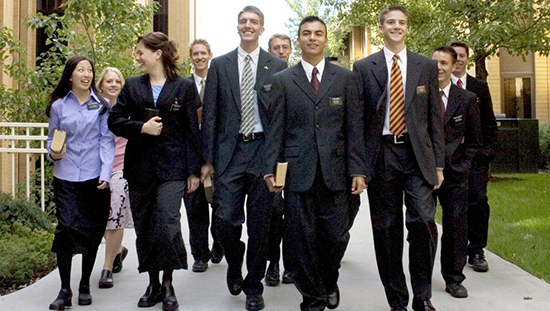 I’ll never forget my excitement. I was three months into my mission in London and waiting to receive the news of who my second companion would be when I learned I was going to become a trainer. I was stoked. This was my wish. With my new companion, I was confident that nothing could stand in the way of us living up to the legacies of Heber C. Kimball, Wilford Woodruff and the legendary English missionaries of old.

I remember the surprised looks on my zone leaders’ faces when we told them our companionship goal for the month of September was four baptisms. “Are you sure you want to go for four?” “Why don’t you just go for one or two, and then if you achieve it, you can go for four in the next month”? They didn’t believe we could achieve this goal. But we were determined. I thought I knew what it took to achieve four baptisms and with our obedience and faith, I felt that the Lord would sustain and bless us in our desire.

We worked like dogs. We kept all of the missionary rules- every single guideline. We prayed with faith and determination. We studied diligently. We fasted. We pleaded. We only baptized one person. We were, of course, happy with this one baptism, but felt disappointed we had not reached our goal of four. Where had we fallen short? What had we left undone? What could we have done better? These questions and many others ran through my head at the close of the month.

We had done absolutely everything in our power to achieve the success we had desired, and yet we had fallen short. In my four short months in the mission field, I had observed this same phenomenon happening to other missionaries as well- they had worked hard, paid the price, obeyed the rules, but had likewise fallen short. What made it worse was the fact that several missionaries who were known for being less obedient to mission rules somehow baptized more than those who were diligent. Why? This is a question nearly every missionary wonders at some point during their mission. Many grow disillusioned and conclude that being obedient doesn’t really matter.

Nothing could be further from the truth. What I discovered was a fascinating insight.

There is a process of spiritual growth that needs to be followed in coming to Christ through baptism. It is unrealistic and unfair to expect the Lord to shortcut that for one of his children simply because we desire it as missionaries. People have the agency to choose and the Lord is not going to force anybody into His church. And as much as we might like to at times, neither can we as missionaries. What we can do is learn to facilitate their spiritual growth, becoming the most effective instrument in the Lord’s hands that we can be.

In this moment I am writing on the most effective instrument I know of- a laptop with word processing software. I can type a sixty words per minute and print off everything I’ve written in seconds. But consider if I went back to the time of Mormon, when the only technology available was metal plates and a chisel. How much more difficult would it be to accomplish this same task? I could labor all day, never letting up from the work, and yet I would make less headway in a week than I would in an hour if I had a more effective instrument. 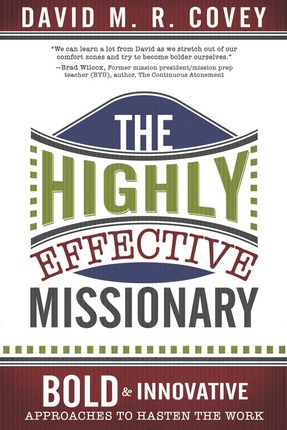 Click to buy Too many missionaries continue to hammer away at missionary work when more effective methods are possible. Maybe it’s because that’s how their trainer taught them to do it. Maybe it’s the way it’s always been done. These missionaries sincerely pray for more success but don’t spend enough time evaluating their methods. In Doctrine and Covenants 9 the Lord teaches us that simply asking is not sufficient- “Behold you have not understood; you have supposed that I would given it unto you when you took no thought save it was to ask me…you must study it out in your mind; then you must ask me if it be right.”

We must study it out in our minds. We must be creative in adapting and refining the way in which we do missionary work, and be open to the inspiration that will come. We must have the courage to try new things, even if it means falling on our face a few times. The worth of souls is great and we cannot afford to be content to be mired in mediocre habits.

That is why I wrote The Highly Effective Missionary: Bold and Innovative Approaches to Hasten the Work. Most of the books I’ve read about missionary work focus on the importance of being obedient. The main points of each book are focused on the traditional virtues of love, hard work, discipline, diligence, and faith. They refer to the importance of obeying the mission rules, being personally righteous, and relying constantly upon the Lord. This is great; all of these virtues are valuable to missionary work and the focus on their development is fully deserved.

However, I believe we are severely limiting ourselves from reaching our true potential as missionaries if we stop there. I want to encourage a similar focus on developing the skills that will lead people to spiritual change through baptism. No matter how hard we work or how closely we adhere to the handbook, we won’t help anyone if we don’t know how to interest people in our message, bring them to church, or help them keep commitments.

In the upcoming weeks I will share several excerpts from my book outlining the methods and mindsets that led our mission to go from baptizing an average of 30 people a month to 130 people a month within a one year time period. As I learned to apply these principles I began to understand why my companion and I had not achieved the success we had so wanted. We went from getting in one door in a thousand to getting in one door in four. We went from a fear of bringing up baptism to a focus on it. We went from carefully arranging dinners with the members to carefully arranging joint lessons.

The principles of a Highly Effective Missionary have since been applied successfully in missions all around the world. I hope you will find them valuable in your own missionary work and will share them with your missionary friends and family. As Joseph Smith declared, “After all that has been said, the greatest and most important duty is to preach the gospel.” In a time filled with fear and confusion the world needs the gospel message more than ever.

Let us renew our commitment to becoming the best missionaries we can be.

As Branch Pres in a small NZ township, with a large rural area to cover, I find this article most interesting & I look forward to reading more. Our missionaries & local members work hard to find genuine investigators, & any new & innovative approach to this work is welcome. Thanks for sharing.

I have loved this book. A great tool for the pre-missionary and the missionary to aide them in the work. Bold and innovative look into missionary work 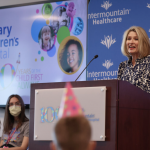