Preparation With Purpose: Life in a Mormon Missionary Training Center

Read the complete story at the LDS Newsroom.

On a Thursday afternoon in Mexico City in July, emotions are close to the surface as Victor Manuel Guijarro Torrez and his wife drop off their son at The Church of Jesus Christ of Latter-day Saints’ Mexico Missionary Training Center (MTC). Although they won’t see him for two years, the MTC is just where they want their son to be – a place where he will prepare to teach others about Jesus Christ and to help the needy. “We helped raise him with the hope that he would go on and fulfill his purpose as a missionary [to invite others to Christ],” Victor says.

Each week, hundreds of families across the globe repeat this farewell scene as their sons and daughters embark on an 18- to 24-month journey as Mormon missionaries – a global force now numbering a record-high of more than 75,000. Because it’s a very demanding lifestyle – one devoted entirely to teaching others about Jesus Christ and helping the needy – each missionary’s first stop is one of the Church’s 15 MTCs, where they spend two to nine weeks in training (those not learning a foreign language stay at an MTC for up to two weeks) before departing for one of the Church’s 405 missions.

The Provo, Utah, MTC has capacity to hold the most missionaries at one time (over 5,000). The newest and largest MTC campus is in Mexico City, which is located on 90 acres and can accommodate more than 1,000 missionaries. The other MTCs are scattered across the globe in Argentina, Brazil, Chile, Colombia, the Dominican Republic, England, Ghana, Guatemala, New Zealand, Peru, the Philippines and Spain. (See photos of each MTC.)

Many missionaries entering the MTC experience an “instant feeling of peace and purpose,” Brazil MTC President Ralph Degn says, because “a great deal of time is given to understanding better the doctrine of Jesus Christ and the holy scriptures. 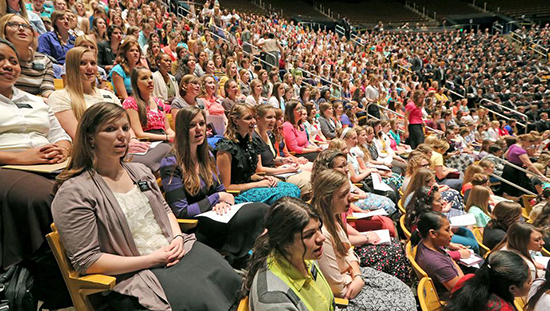 While MTC locations and languages differ, the curriculum taught at each facility is the gospel of Jesus Christ as set forth in the Bible and other scriptures. “We stick to the very basics of faith in Jesus Christ,” says Karen Pratt, wife of Mexico MTC President Carl Pratt. “All of our teaching tries to be based on the objective that [the missionaries] learn the minute they get here.” Each missionary’s learning experience is enhanced, President Pratt adds, by an MTC’s serene atmosphere. “It’s a little island of peace and tranquility,” he says, “and it’s easy for them to focus on the gospel and feel what they need to feel here.”

Mormon missionaries generally arrive at an MTC with a foundation of religious knowledge gained from years of instruction at home and church. Many Mormon families study the Bible and other books of scripture together daily. Many youth also attend weekly high school and college religion courses the Church offers. And on top of this are weekly Mormon worship services, held on Sundays for three consecutive hours.

But it should be noted that MTCs provide a decidedly more rigorous curriculum rooted in gospel fundamentals.

The meat and drink of MTC life is daily practice teaching situations, intense gospel classroom instruction from teachers who are former missionaries, weekly devotional addresses from Church leaders and MTC staff, and weekly service opportunities. At some international MTCs, such as those in the Dominican Republic, the Philippines, Peru and Spain, missionaries also have opportunities to perform community service and proselytize outside the MTC with missionaries who have completed MTC training.

MTC gospel study and teaching practice is essential for missionaries to “teach and testify effectively and to experience the joy of missionary work” says President Kenneth Lynn Openshaw, president of the Argentina MTC.

The Provo MTC teaches 56 languages, 31 of which require nine weeks of training (26 of those 31 are Asian or Eastern bloc languages). The 14 international MTCs teach a total of seven foreign languages. (International MTCs also provide native language training in 17 languages for missionaries not learning a second language.) Each instructor who teaches a language is either a native speaker or is fluent thanks to his or her own missionary service.

Speaking of the challenge missionaries face in learning a language, Church President Thomas S. Monson has said he “marvels at the devotion and total concentration of these young men and women as they grapple with the unfamiliar and learn the difficult.”

Although missionaries often have little or no prior experience in their assigned foreign language, outsiders note that they generally learn the languages well. As Col. Derek Tolman, commander of Utah National Guard’s linguistic unit, told The Salt Lake Tribune, MTCs are “excellent at teaching the fundamentals in a short time. The students are highly motivated, and the learning curve is amazing.”

Jenna Dewey, who teaches Spanish at the Provo and Mexico MTCs, says a key to language success is the purpose-driven curriculum.

“I help [missionaries] understand that it’s not just Spanish class, but it’s for a purpose,” Dewey says. “It has been incredible to help them see how much more it means [to them when we teach this way].”

In addition to language instruction, teachers provide cultural training to help missionaries make a smoother transition into their assigned foreign country. “I think an ambassador – whether for a church or a country – needs to learn to love the people and the country in which they are serving,” President Pratt says.

Learning to Live on Their Own

In addition to preparing to share the gospel of Jesus Christ and learning a foreign language, missionaries in the MTC learn how to live on their own.

For many of these 18- and 19-year-old men and women, the MTC is their first experience living away from home.

Missionaries (frequently with the help of family and friends) fund their own missions – an approximate cost of $10,000 to $12,000 per missionary. They also do their own laundry, exercise daily, eat nutritious meals provided by each MTC cafeteria and stay in touch with family and friends via weekly emails.

Following the pattern Jesus Christ established in the New Testament, full-time Mormon missionaries are sent out two by two (see Mark 6:7). They spend all day, every day, with an assigned companion (once they depart the MTC, companion changes occur every couple of months).

“They eat together, they are housed in homes and dorms together, they are roommates,” Sister Pratt says. “They grow to love one another quickly.” And these companionships allow these young men and women to “develop friendships that will span continents in the years to come,” Colombia MTC President Robert Dyer says.

Come to Prepare, Go Forth to Serve

Overall, the MTC experience of rigorous gospel, language and life training is designed to “help the young men and women entering the mission field to be better prepared in every way to serve,” Brazil MTC President Degn says.

Missionaries who receive this training agree.

“You arrive here and people are elders and sisters,” says Elder Shazer Isae Luis, who recently trained at the Mexico MTC. “They have a countenance that makes you say, Wow!’ The image a missionary carries with him is very different. It feels magnificent.”