Missionary Moments: Three Angels Will Bring You the Truth 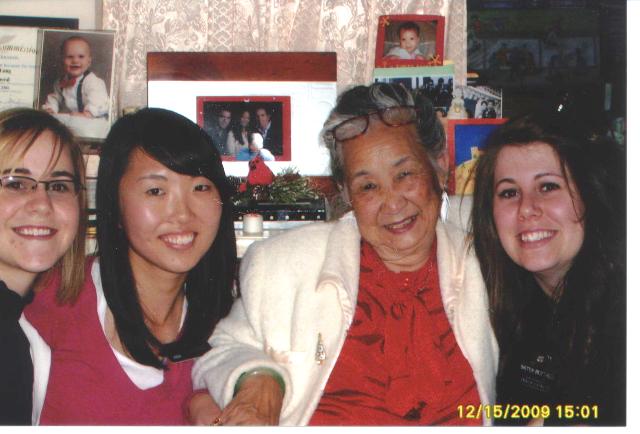 I would like to share Sang Hai’s conversion story from my mission. We found her the first week of December on a cold winter morning. I was working that day in a three-some or trio with Sister Bertucci and Sister Kim in a suburb just outside Washington D.C.    One day as we drove by several homes we had not yet tracked (while heading to a different area), Sister Kim suddenly said, “I think we need to go back and knock on those doors!”  Sister Bertucci and I said, “Okay if you feel it’s right.”

We all agreed that we should follow the promptings, turn around and park, even though this was not in our plans for the morning.  We quickly parked the car and got out and started knocking on the doors where we had first felt impressed to stop.  We soon knocked on Sang Hai’s door and waited to see if anyone would answer.

Suddenly, Sang Hai came to the door! She is an 80-year-old Chinese grandmother who converted to Christianity several years earlier.  Much to our surprise, she let us right in like she was expecting us!  We then shared a message with her that really caught her attention.  For some reason, we said: “God wants us to build up His Kingdom here on the earth and the Restoration is the way.” This is certainly not a phrase we typically use, but it was exactly what she needed to hear! She excitedly replied that she also wanted to help build up God’s kingdom! She did everything we asked of her during the lessons and she was baptized just three weeks later.

It wasn’t until after her baptism that she finally shared with us her special miracle.  She explained to us that before we met her she had prayed several times to know how she could help build up the Kingdom of God here upon the earth. She said that the very night before we knocked on her door, she had sincerely prayed for guidance on what God wanted her to do and then she fell asleep.  That night she had a dream where she was told that three angels would soon come and knock on her door and that she needed to let them in and listen to what they taught her because they would teach her the truth!  She told us that normally she never answers the door since she lives alone and is afraid of strangers, but because of her dream the night before, she knew that she needed to hear our message.

When she looked out and saw that there were three of us standing on her doorstep the morning after her dream, she knew it was a direct answer to her prayers, so she anxiously let us inside. Then when we immediately discussed how to build up God’s Kingdom, she knew that we were sent from God with a divine message.

After her baptism, she always called us her three angels. It is amazing how Heavenly Father leads his missionaries to those who are praying sincerely for his guidance and direction!

Read "The Liahona Triad" by Robert E. Wells. Beautiful sermon on Angels and Missionaries! You are the angels because you are doing the same work the Angels do! https://rsc.byu.edu/archived/book-mormon-treasury/6-liahona-triad

Wonderful story I have passed it on to some non-member Christian friends because it reminds me of a similar story with a similar great outcome.