If you’re looking for some great books for summer for ages 9 and older, look no further. I’ve put together a list of books that would be great reading during these hot summer days or nights. My list includes historical fiction, mystery, science fiction, realistic fiction, fantasy and humor. 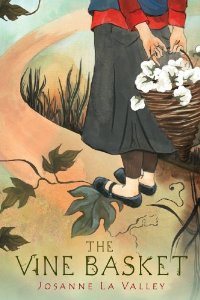 The Vine Basket, by Josanne La Valley, is a look inside East Turkestan that has recently been taken over by Chinese rule. This historical fiction has a young Uyghur girl dealing with the oppression that is taking over the land and her family fears they may lose their farm. She sets out to go to the market where she hopes to sell enough peaches to help her family, but a tourist sees her unusual vine basket she had hung by her booth.  And this occurrence opens a way to possibly avoid the rugged Chinese factories where she will most likely be sent. The story is written so well that you are constantly pulling and hoping for the best for this girl – and her people!

Hold Fast, by Blue Balliett, is the author’s newest mystery.  If you’ve not read any of her other four mysteries, you’re in for a real treat! This mystery is another sophisticated storyline that will keep you guessing to the end. Eleven-year-old Early lives meagerly with her little brother and parents in a one-room apartment in Chicago.  But when her father, who works at the library, suddenly goes missing and then there’s a break-in at the apartment, Early and her family have to move to a homeless shelter. But Early is determined to find her father and proceeds to begin to solve this highly technical mystery. There are underlying clues throughout the storyline and Early’s strong reserve and perseverance is what ultimately brings about the solution. This is a brilliant and wonderfully written story!

What Came From the Stars, by one of my favorite authors, Gary D. Schmidt, is a mixture of science fiction, fantasy and realistic fiction. This is a very unusual book and the first chapter will not draw you in. That’s because there are italicized chapters sprinkled throughout that take place on another planet. This planet is fighting the evil forces and in an attempt to save their most valuable possession, a glowing necklace, they throw it into space. The next chapter is what will grab you and keep you going to the very end!  This magical chain lands in sixth-grader Tommy’s lunchbox. He proceeds to put it on and that’s when amazing things begin to happen. For instance, when he begins to draw a picturesque scene of a river, the water actually flows.  He finds that he has new knowledge about another planet including words that are completely foreign to him.  But now a big problem exists for him: the evil forces have come to earth to reclaim this necklace. It is difficult to navigate through the short chapters from the other planet. But the story is so good, you can fast-forward over them.  My favorite other books from this author are the Newbery winning book, “The Wednesday Wars” and “Okay for Now”. 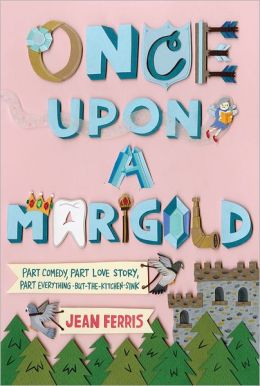 Once Upon a Marigold, Twice Upon a Marigold and Thrice Upon a Marigold, all three books by Jean Ferris, are wonderful stories that read like classic fairy tales. The first book in this series begins with Christian being raised by a troll. He spies a beautiful maiden, Princess Marigold, across the river whom he instantly falls in love with. But she is already bequeathed to marry a nobleman. But when Christian learns that Marigold’s life, as well as the kingdom, is in danger from the evil queen, he must save them all. There’s also something very magical about Marigold that Christian is about to learn. In the second book, the queen returns and wrecks havoc with Christian and Marigold by kidnapping the troll that raised Christian. But Marigold figures out a way to help the queen become a better person. The third installment has the king and queen, (now Christian and Marigold), having a beautiful baby daughter. However, she is soon kidnapped and now a strange crew of rescuers, which includes a white elephant and a washed-up wizard, are about to attempt to save the baby. All three books read with wit, humor and unpredictability and would be terrific to read-out-loud to your child!

Zebra Forest, by Adina Rishe Gewirtz, is a realistic fiction book that takes place in a rural setting where a remote old house is adjacent to a wooded forest with trees that have dark and light trunks emitting the images of a zebra. That’s how two siblings, Annie and Rew, label their woods where they live with their elderly Granny.  Annie and her little brother have always been told that their father died in a fight and the man who fought with him is in prison. They love their forest and make up tales about whom their father really was even though they have no memory of him. But everything is about to change when someone breaks into their home and everyone in that house is about to learn something they never knew. The story has language that seems to drip with eloquence off the pages and the action is non-stop! 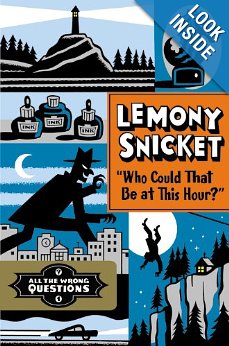 Who Could That Be at This Hour? (All The Wrong Questions), by Lemony Snicket, is a prequel showcasing a young Lemony as he begins his investigations by attempting to locate a priceless heirloom. As he travels with an experienced investigator, the reader begins to question who actually stole the heirloom, as well as the identity of the investigator. There is so much foreshadowing and red herrings that it reads like a sophisticated Sherlock Holmes mystery written for kids. This is the first book in a planned series and some of the questions that may arise won’t be solved in this book.