See the article and a photo essay of the event here.

Salt Lake City –The president of The Church of Jesus Christ of Latter-day Saints reminded Mormons around the globe Sunday that there is “no proclamation more relevant, no responsibility more binding, no instruction more direct than the injunction given by the resurrected Lord” to “teach all nations” (Matthew 28:19) the gospel of Jesus Christ. 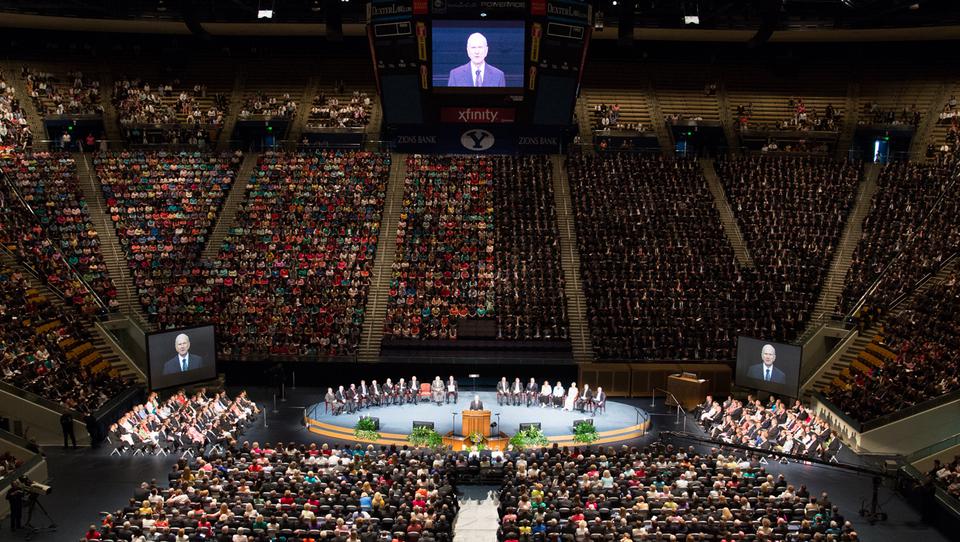 This comment from President Thomas S. Monson comes nearly eight months after he announced lower age requirements for Mormon missionaries (men can serve at 18, women at 19) – an announcement that has generated a wave of new missionaries.

The Church, which has always followed Christ’s New Testament teaching cited by President Monson, announced more developments Sunday in its mission to fulfill this charge. During a two-hour worldwide broadcast originating from the Marriott Center in Provo, Utah, Church leaders, missionaries and members were also encouraged to follow the Savior as they work together to bring others to Christ.

President Boyd K. Packer of the Quorum of the Twelve Apostles spoke about the importance of teaching the gospel of Jesus Christ effectively, counseling members to “decide to do it right; decide to be better.” And Elder L. Tom Perry of the Quorum of the Twelve reminded Latter-day Saints that, in the words of Joseph Smith, the Church’s “greatest and most important duty is to preach the gospel.”

Fellow apostle Elder Russell M. Nelson reminded members and missionaries to be concerned about each individual’s needs, saying, “When we follow Jesus Christ, we act as He would act and love as He would love. … Until you know a person’s name and face, the Lord cannot help you to know his or her heart.”

Developments announced in missionary work included a milestone for the number of missionaries serving and the news that missionaries will use the Internet and digital devices to reach out to others. Elder Jeffrey R. Holland of the Quorum of the Twelve said, “there will continually be improvements in the way we perform missionary work.”

The number of missionaries continues to rise since President Monson’s October 2012 announcement of lower missionary age requirements. At the time of the announcement, 58,500 missionaries were serving; as of this week, Elder L. Tom Perry of the Quorum of the Twelve Apostles said, more than 70,000 missionaries are serving – the most ever at one time in Church history.

Female missionaries comprise more than 20 percent of that number, with 14,650 serving. As the Church announced in April 2013, the increasing number of female missionaries has led to the creation of a mission leadership council that will include both men and women as missionary leaders. This council will consist of the mission president and his wife, assistants to the president, zone leaders and sister training leaders – a newly created role.

As the Church reported in February 2013, 58 new missions were created to accommodate the influx of missionaries, bringing the total number of missions to 405. By year’s end, the Church anticipates having 85,000 missionaries.

Using Technology to Invite Others to Follow Jesus Christ

Speaking earlier in the day to new mission presidents, Church leaders said that missionary use of the Internet and digital devices such as iPads will begin in phases and only in designated missions for the rest of this year. The Church anticipates these tools will be available to missionaries throughout the world sometime next year.

Elder Perry said those who have interest in the Church often complain that they “stop by one of our buildings only to find it locked.” He said missionaries will be at chapels when needed to greet interested individuals and guide them through our houses of worship.

In the worldwide broadcast viewed by hundreds of thousands of Latter-day Saints, Elder Neil L. Andersen of the Quorum of the Twelve Apostles encouraged members and missionaries to “work together in faith and unity” with “a love for one another and for those we serve” as they invite others to follow Jesus Christ.

There are a lot of people in the world looking for JESUS CHRIST and the TRUE CHURCH and I can't think of a better way to get the word out there than these fine young missionaries. I love every one of them.