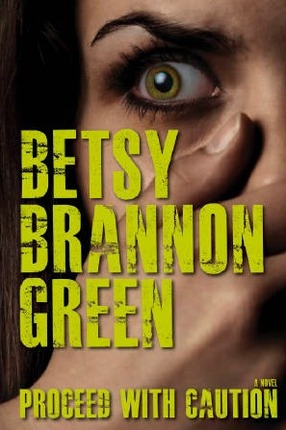 Brook Clayton disappears when police officers knock on her college apartment door. She knows they want to serve a subpoena and she has no intention of accepting it or of testifying. When her apartment is searched and it appears she left through the back in a hurry without luggage or her cell phone, her parents are notified and soon her uncle, Major Christopher Dane, is spearheading a search for her and looking for a reason for her disappearance.

Proceed with Caution is Betsy Brannon Green’s newest release and another romantic suspense novel with a military twist. Many of the characters are familiar from the Hazardous Duty Series which features an elite military unit that takes on unconventional top secret cases and is headed by Christopher Dane. Dane’s wife, Savannah, and her daughter, Caroline, also appear in the novel.

Dane has a pretty good idea where Brooke has gone and sends one of his best men Hunter a.k.a. Owl to protect her. He determines it best to keep her whereabouts from the District Attorney and police until he has a better idea of what they want from her, what she saw, and whether or not the other problems in his sister’s life are related to Brooke. It soon becomes clear Brooke saw something she wasn’t supposed to see and that testifying to what she saw would be dangerous. Owl helps Brooke disappear more thoroughly by pretending they are a married couple working at a Civil War reenactment site. Though very different in personality, the two find their pretend marriage developing into real feelings for each other.

In the meantime, Dane is struggling to find out more about Brooke’s situation, clear his brother-in-law who is under suspicion for the disappearance of a large sum of money from his business, and keep his nephew safe until he can arrange a way out of a war torn African nation where rebels have closed airports and are a threat to foreigners. Adding to his concerns are Savannah’s extreme morning sickness and his concern that with the multiple problems in his sister’s life, there might be an unknown risk to her and to her daughter, Caroline.

Green’s characters are complex with both strong positive aspects and flaws and quirks that are negative. There’s a strong Southern flavor to their speech and actions. Dialog is realistic, sometimes funny, enjoyable, and sometimes so aggravatingly slow the reader would like to inject a little Yankee speed into it. I like Brooke and Owl both and can see where they do each other good and each of their strengths builds the other’s shortcomings, but I question whether a relationship between two such starkly different people can last.

The plot builds nicely, grabs the reader’s attention quickly, and never lets it go. At first the various mysteries appear fairly straight forward, but grow more complicated. As expected the question arises whether the problems that beset Dane’s sister’s family are interrelated and the reader will likely be surprised by the answer. Most readers will be frustrated by the ending, but a sequel is expected in October which will hopefully provide a more satisfying conclusion. Better block out a chunk of time for this one because it’s a difficult book to put down.

Betsy Brannon Green has lived most of her life in the South and brings a definite Southern flavor to her writing. She and her husband, Butch, have eight children. She is the LDS Family Services Representative for the Bessemer, Alabama Stake and she works for the Hueytown Elementary School.