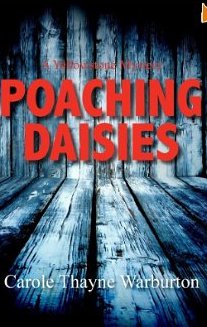 Poaching Daisies, A Yellowstone Mystery, by Carole Thayne Warburton is a romantic suspense novel with a touch of humor that will appeal to a wide spectrum of readers.

Penny Thorton failed at the police academy because a psychological analysis said she couldn’t kill another person if needed, so instead of becoming a police officer, she applied for and was hired as summer help in Yellowstone National Park. She practically grew up in the park, spending her summers with her Aunt Iris in Silver Gate, Montana, just outside the northeast entrance to the Park. She loves the area and works hard to prove that her diminutive size is not an indication of lack of strength or ability. After an exhausting day of clearing trails and removing dangerous windfalls, she stumbles onto a black bear that has just been shot. Suddenly someone is shooting at her and she is running for her life. When she reaches the road, she catches a ride with a man who is sympathetic, but she realizes he is possibly the person who shot the bear. Russ Rupert, her rescuer, is a hunter who tracks and kills predators who ravage ranch stock outside the park’s boundaries.

Aunt Iris is a botanist, a gung-ho conservationist, and considered a bit crazy. She’s determined to eradicate the oxeye daisy, a pretty and harmless looking wild flower. However, this common daisy found all over the US is actually a noxious weed that ruins meadows and pastures because it crowds out forgeable plants and grasses. She has her own encounter with Russ and determines to convert him to her cause. To her horror she discovers he has planter barrels full of the daisies in his back yard. In her zealousness to confront him she discovers his door is unlocked and barges inside his home where she foolishly does some exploring and ends up with a broken ankle from a fall when he surprises her by his sudden return home. Though they snipe at each other, he takes her to a hospital, waits overnight, and takes her back to her home.

There are more bears killed, a young ranger who had dated Penny a few times is arrested, and she finds herself embroiled in a mystery. Aunt Iris gets involved and neither woman is sure whether Russ is their friend or if he is possibly the one responsible for the acquisition of bear gall bladders and paws which command large amounts of money on the Asian black market. As rangers, shop keepers, tourists, and law officers get involved, the two women soon have no idea who they can trust or who wants Penny dead.

Penny is strong, smart, a little naive, and likable. Iris is an interesting character. She too is smart, single minded, impulsive, and would be a real pain to spend much time around in real life. Russ is Iris’s match and though opposites in many ways, they both have strong codes of personal ethics. Most of the minor characters are also distinct individuals.   All in all, Warburton has created a great cast of characters with differing viewpoints and objectives.

The plot is well-developed and each time I thought I knew who was responsible for the bear deaths and for trying to kill Penny, a new twist came along that sent me on a different path. This book will appeal to many readers. It has a suspenseful mystery. It’s full of great details about nature. Sometimes it’s really funny. There’s a convoluted romance or two. It has two heroines who take life by the horns and don’t wait around for someone else to rescue them. And it has a couple of men who are strong enough to appreciate strong, intelligent women.

Carole Thayne Warburton has four previously published novels to her credit. She and her husband live in northern Utah near the mountains she loves. She is a teacher, potter, writer, and is intimately acquainted with the Yellowstone area.

Thanks so much for this great review of my book, From the feedback I'm getting people are really enjoying it.