A DNA repair enzyme’s constant operation gives new meaning to the scripture that declares that God supports us “from one moment to another.” (Mosiah 2:21) 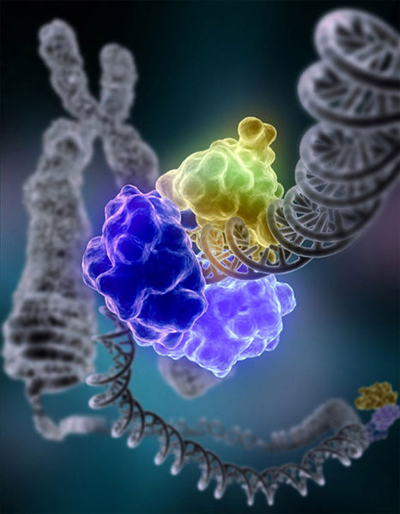 DNA ligase enzyme repairing a strand of DNA, needed every day in every cell.

This illustration shows the enzyme called DNA ligase repairing a break in a strand of DNA. These breaks occur at the rate of 1,000 to 1,000,000 molecular lesions in each cell, every day.[i]

It is almost unbelievable to me to see this example of how life is built upon a foundation that is extremely resilient and yet depends on so many ongoing processes, working constantly and dependably.  Without this correction program continually running life would cease.  In an excellent example of “which came first, the chicken or the egg?” the structure of DNA ligase, essential to maintain the DNA molecule, is also specified in the DNA information code. In other words, the formula for the repair enzyme is found in the mechanism it needs to repair. The cell would not last a day without this repair mechanism in place, so how does its formula get into the DNA and start working without having the whole system collapse and die? In my mind, this is definitely miraculous.

To me, this remarkable repair molecule for the long DNA strands is a powerful witness of the hand of God in creating and sustaining the universe.  It gives more meaning to the scripture:  “I say unto you that if ye should serve him who has created you from the beginning, and is preserving you from day to day, by lending you breath, that ye may live and move and do according to your own will, and even supporting you from one moment to another-I say, if ye should serve him with all your whole souls yet ye would be unprofitable servants. (Mosiah 2:21) 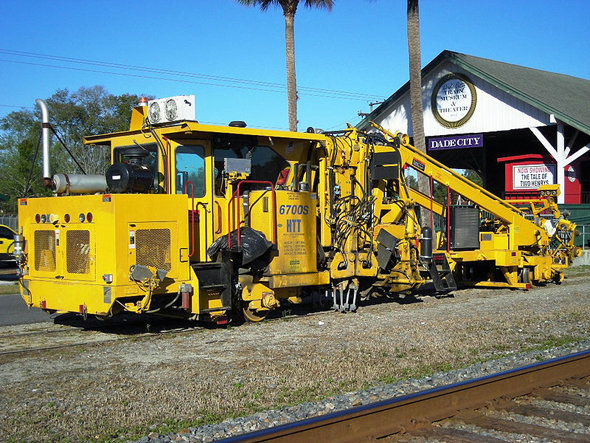 Complicated track maintenance vehicles such as this one keep the railroad lines open.[ii]

The DNA repair molecule reminds me of the railroad repair engines that we see from time to time on railroad tracks moving along the tracks and repairing inoperable sections. These small railroad engines need working railroad tracks to get to the sections they need to repair. If breaks in the rails became too severe and frequent then it could not get to the track location where the broken track is. In this case, trucks and roads would have to be used to get repair equipment to the right section of track.  But how could that work for this DNA repair protein, the DNA sequence of which is specified in the very “information memory unit” it constantly repairs?

Just how much DNA double helix “track” has to be “kept operational” in the human body by this and other repair mechanisms?  A typical estimate is that there are ten trillion cells in our body, each with DNA strands six feet long.  All together across those cells, that is almost twice the distance to the minor planet Pluto from the Sun and back within the DNA of a single human body![iii]

We live in a day where the miracle of creation and the amazing design, adaptability and progression of living beings and man himself is attributed by many to arise exclusively from a source of random mutations.[iv]  The DNA changes are asserted to be without any higher purpose, without the guidance of spirit or intelligence and definitely without miracles.  Especially in a world where the reality of the spiritual and intelligent dimensions of life is denied I agree with Elder James E. Talmage that that “in the broader sense, all nature is a miracle.”[v]

As we examine this DNA repair molecule and other remarkable discoveries about life and what is necessary to maintain life we should contemplate Moroni’s inspired words:  “I will show unto you a God of miracles… and it is that same God who created the heavens and the earth, and all things that in them are. … Who shall say that it was not a miracle that by his word the heaven and the earth should be; and by the power of his word man was created of the dust of the earth?” (Mormon 9:11, 17)

“DNA damage, due to environmental factors and normal metabolic processes inside the cell, occurs at a rate of 1,000 to 1,000,000 molecular lesions per cell per day. A special enzyme, DNA ligase (shown here in color), encircles the double helix to repair a broken strand of DNA. DNA ligase is responsible for repairing the millions of DNA breaks generated during the normal course of a cell’s life. Without molecules that can mend such breaks, cells can malfunction, die, or become cancerous.”  Note:  DNA Ligase molecules are illustrated with colors as they encircle the DNA strand to repair the molecule.

“Scientists investigating an important DNA-repair enzyme now have a better picture of the final steps of a process that glues together, or ligates, the ends of DNA strands to restore the double helix. Our study shows that DNA ligase switches from an open, extended shape to a closed, circular shape as it joins DNA strands together,’ says the study’s senior author Tom Ellenberger, D.V.M, Ph.D., the Raymond H. Wittcoff Professor and head of the Department of Biochemistry and Molecular Biophysics at Washington University School of Medicine in St. Louis. “The ligase resembles a wristwatch that latches around the DNA ends that are being joined.'”

“5  Don’t try this at home: If uncoiled, the DNA in all the cells in your body would stretch 10 billion miles-from here to Pluto and back.”

“Some sources told us that the average adult human body is made up of “50 million million” (50 trillion) cells, while others put the figure closer to 10 trillion. Science NetLinks, a resource for science teachers, stated that there are approximately “ten to the 14th power” (that’s 100 trillion) cells in the human body.”

“Dawkins also clarifies the meaning of “random” in Darwinian biology: mutations are not random’ in the mathematical sense of the word (that anything is possible) since there are at least chemical constraints. They are not even random in the physical sense of the word (that no external force can affect them) since radiations can sometimes cause mutation. They are random in the sense that they have no other purpose than to mutate; they do not necessarily improve the organism or the organism’s chances of survival. “Chance” is probably a better word.” (emphasis added)

“Humans have always wondered about the meaning of life…life has no higher purpose than to perpetuate the survival of DNA…life has no design, no purpose, no evil and no good, nothing but blind pitiless indifference. –Richard Dawkins.”

“”Orthodox evolution teaches that the living world has no plan or purpose except survival, is random, undirected, and heartless. Humans live in a world that cares nothing for us, our minds are simply masses of meat, and no divine plan exists to guide us. These teachings are hardly neutral, but rather openly teach religion–the religion of atheism and nihilism…”

“Miracles cannot be contravention of natural law, but are wrought through the operation of laws not universally or commonly recognized.  Gravitation is everywhere operative, but the local and special application of other agencies may appear to nullify it … Achievements made possible by modern invention … –these are no longer miracles in man’s estimation, because they are controlled by human agency. … We arbitrarily classify as miracles only such phenomena as are unusual, special, transitory and wrought by an agency beyond the power of man’s control.

“In a broader sense, all nature is a miracle. …

“In the contemplation of the miracles wrought by Christ, we must of necessity recognize the operation of a power transcending our present human understanding.  … To deny the actuality of miracles on the ground that, because we cannot comprehend the means, the reported results are fictitious, is to arrogate to the human mind the attribute of omniscience, by implying that what man cannot comprehend cannot be, and that therefore he is able to comprehend all that is.”